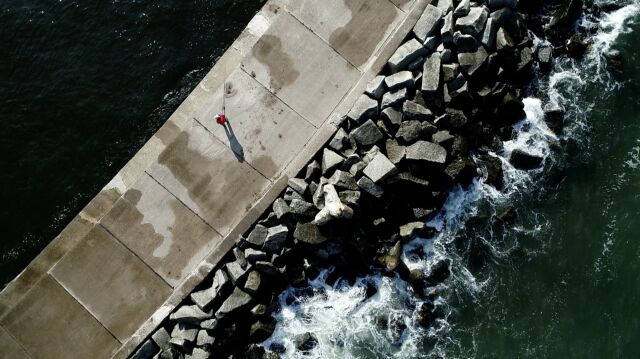 – The most difficult thing was the sight of this girl. You had to get it out of the water, take it to the platform and fix it. The first nights I had sleepless. This face … I found pictures of this child on the internet. I wanted to know what she looked like when she was alive – says Andrzej Stępowski, one of the rescuers who participated in the research on children in Darłówko.

Tuesday, August 14, 2.30 am The Water Rescue Coordination Center received information that three children were missing in Darłówko. Probably the wave has taken them away. All services have started searching.

Apoloniusz Kurylczyk, vice president of Zachodniopomorskie WOPR, took part in the campaign from the beginning.

– Maritime search and rescue service in Gdynia asked us for assistance with searching on the water and our divers to search the bottom of the sea. In Darłów, the search of three more people was still in full swing. The Water Rescue Coordination Center picked up two rescue teams, one from Bialogard, the other from Szczecinek, who immediately went to the place of action and practically started to seek refuge – he recalls.

That same day the rescue workers found a boy, a 14-year-old. They dragged him ashore and immediately brought him back to life. We have managed to restore his blood circulation. The boy was transported to the hospital with a helicopter from the Air Rescue Service. Unfortunately, they will learn that the child died that night.

The 11-year-old and the 13-year-old are still not found. The brothers and sisters were considered missing. At about 7:00 PM you had to stop searching at sea. The conditions were so severe that they threatened the life of saviors. However, they patrolled along the coast all the time.

– The rescuers and the policemen went to the breakwater. They searched this place, hoping the sea would throw children there. At that time it was still possible to expect that they would survive. Previously, the 14-year-old managed to restore blood circulation – says Kurylczyk.

For the next two days, the services were a few dozen kilometers along the coast. Divers sought the bottom of the sea. The number of aid workers increased and more services also helped.

– Weather conditions were not that difficult anymore. The sea was calm. We have tried to view all possible stones, between stacks, palisades. At a distance of several tens of kilometers, we control almost every meter of the coast – says Stępowski.

Unfortunately, the search did not return any results. Until Friday.

"I fished this girl out of the water"

– We had two alarms. Witnesses from the coast saw the floating body. One event took place in Unieście, about twenty kilometers away – he says.

They immediately sailed to this place.

– It turned out that it was a jet floating on the water. In the second case, slightly closer to Darłowo, it was an orange ball – says the savior.

Around 16:30 there was another alarm. The captain of the cruise ship reported that one of the tourists noticed something that looked like a human body. WOPR rescuers came into their place.

Andrzej Stępowski stepped on a rescue scooter with a friend. When they were there, he jumped into the water.

– I took this girl out of the water. I took it out – says Stępowski.

He put the 11-year-old on the rescue platform. He wrapped her in the NRC foil and held her, they returned to the harbor.

– We were just busy with another briefing to change the search areas. I was in the harbor at the time. I helped the rescuers bring the body ashore – says Kurylczyk.

The girl's body was found near the place where it was lost. On this day, the rescuers searched the area for up to 20 hours. No effect.

The boy's body gave the sea the next day, he lay on stones on the east side of the harbor.

– At the same time, officers and we appeared on the spot with SAR rescuers. We came. There were also relief workers from the eastern part of Darłówek who work on the beach – says Kurylczyk.

After finding the 13-year-old, the search campaign ended.

"There were difficult actions, but such a drama is not yet"

– It was about children. This consciousness caused great determination. We wanted to find them as quickly as possible to complete the part of the drama of the family that certainly took place in their head – Kurylczyk remembers.

– I have been a savior for 36 years. There were difficult actions. There were also those that I would not come back. Years ago, a friend of mine left me a savior, because he was no longer able to swim and I kept sinking. It was a very difficult action. However, there was not such a situation that there would be so many victims at the same time – says Stępowski.

– The most difficult thing was the sight of this girl. Breaking these human feelings to lift her out of the water, take her to the platform and secure her. The first nights I had sleepless. The face of this girl … It is a few days ago, the water is warm, so the changes in the face have taken place. I found her photos on the internet. I wanted to know what she looked like when she was alive – says Stępowski.

The tragedy in Darłówek shocked people. They began to obey the prohibitions and listened to warnings. However, it did not last long. The saviors knew that it would be so.

– In Łeba and Ustka two small children drowned last year. Three years ago, four children drowned while bathing in the river. After such tragedies, people begin to listen to the savior, observe the prohibitions and warnings. However, once emotions disappeared, everything returned to the state we currently have – says Kurylczyk.

The biggest problem is alcohol and non-compliance with the bathing ban.

– People must respect the red flag, because it is not for us, it is for them. I think that with 70 percent, if not more, we would have avoided the tragedy of drowning if people were to observe the ban on swimming – says Stępowski.

However, people would like to break the rules. Both Kurylczyk and Stępowski met a lot of unreasonable behavior during these years of work.

– I remember how a mother with two children bathed in the sea. The waves were bigger than then in Darłówko. They began to drown, because they invented so much fun for children. Fortunately, they managed to save them – says Stępowski.

However, it is not always successful. Rescuers have minutes to save human life.

– Water is an element that does not forgive. We have dozens of seconds, sometimes a few minutes and often the rescue action changes into a search engine – explains Kurylczyk.

Young people learned in 2013 how dangerous this element was. The 26-year-old, together with his wife and friends, came to Darłówek to celebrate their first wedding day.

– There was no swimming water. His cousin convinced him to go into the water. The men bathed on the former military beach. The latter was swimming better, he managed to get into the waves – says Stępowski.

The 26-year-old stayed in the water. The cousin swam ashore and asked the passer-by for help. They took an air mattress and came back for a man who drowned. There were already emergency workers on their way.

– We gave them the rope. They caught her and shouted: save us, because he is already dead. They stretched out to the coast and left. I immediately sailed for him, but he was no longer visible. It was not until later that another savior saw him. We took it out, but the rescue operation failed. He was under water for too long. The boy, 26, came for the first wedding anniversary – says the savior.

"After this season, Poland can be seen as a third world country"

To avoid tragedy, basic rules must be followed.

It should also be remembered that places with breakwaters can be particularly dangerous. It was at this place that the tragedy took place in Darłówek.

– Waves fall near the breakwater. Later all the water carrying the waves must find a way to return to the sea somewhere. About 10-15 meters away, a wild river is formed that attracts everything it finds along the way, deep in the sea. Then no one should be in the water, even if you are a big swimmer, you can not save it – explains Kurylczyk.

At the same breakwater the depth of the water suddenly increases, which can not be seen with the naked eye. Słupski WOPR has published a film this year, in which the bird's eye view shows the difference in depth with the breakwater and a few meters away.

Rescuers always remind and try to raise what a safe bath should look like. However, they can not do it alone.

– Who knows if Poland will not be seen as a third world after this season? Friends of emergency organizations in the UK talk about projects that support such countries. They travel to Africa and Asia and learn basic principles of flood risk management. If you look at the number of drownings, you may need to invite them to us. We do not have top-down activities that raise awareness and improve education in this area – summarize the vice president of the West Pomeranian WOPR.

The tragedy took place on August 14 on the beach in Darłówko, near the breakwater. The 14-year-old Kacper, the 13-year-old Kamil and the 11-year-old Zuzanna went into the water. As the family later explained in the published statement, the mother of children went to the dunes with the youngest two-year-old. The three brothers of the drow watched.

At a certain moment the children disappeared. Probably the wave has taken them away. The parents have informed the rescuers. On that day only a 14-year-old managed to get away. After resuscitation the boy was transported to the hospital. Unfortunately, he died at night. On 17 August the body of the girl was found, the next day the boy.

The district prosecutor's office in Koszalin conducts procedures against exposure to an imminent danger of losing the lives of children by caring for them. The research also concerns the unintentional death of children. No one has already heard the charge.

The parents of the children blame the tragedy of the rescuers who secured the beach that day. Paweł Zacharzewski, a family judge, has filed a notice about the possibility of committing a crime by persons who are obliged to provide for the sun worshipers in the resort Darłówko. As he said, "parents have many objections to the rescue operation." He stressed that "they were both on the spot".