She drove under the train during the exam. There is a recording of an accident 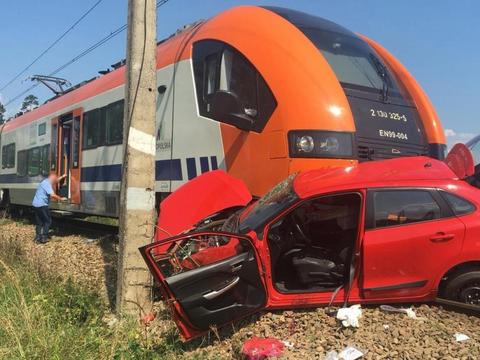 The accident took place on Thursday, August 23, around 11.15. The 18-year-old Angelika P. has done a driving test. Horror took place when it passed unguarded, but marked with the STOP sign, a railway crossing in the village of Zaskale (Szaflary municipality). The red Suzuki suddenly took to the job. 62-year-old examiner – Edward R. managed to escape the car before the train from Nowy Targ-Zakopane hit them. The composition literally wiped the car in which the student was. – She tried to leave, she missed half a meter to survive because she was already starting to move – said TVN24 witnessed the event. The Podhale24.pl portal has published a recording with a tragedy.

The firemen have taken the 18-year-old out of the crushed vehicle. A young inhabitant of the Jabłonka municipality in serious condition went to a hospital in Nowy Targ. Although doctors fought for her life, they were powerless. Angelika died. The girl celebrated her birthday just a month ago. The 62-year-old examiner did nothing, just like the driver and about 60 passengers on the train. – On-the-spot inspections were carried out with the cooperation of the public prosecutor, the expert and the committee for investigating railway accidents – police officers from Nowy Targ informed. They added that the circumstances, the reasons and in particular who is to blame for causing the accident, would explain the investigation. – Tracks and evidence are already secured, including video recording of the train and recording of sound and video of the exam vehicle – said officers.

The 18-year-old rode under the train during the driving test. He is dead

He climbed into the gutter to his beloved. It ended tragically