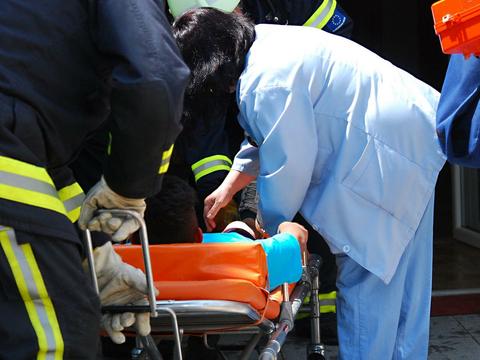 A tragic accident occurred on Sunday around 8 o'clock in Rudno in Lubartów Poviat.

The 29-year-old Opel vectra driver was drunk. As it turned out, he had more than 2.5 ferry boats in his blood. alcohol. Probably because of too high speed he fell out of the way and touched the trunk of the felled tree. It is not known why the airbags were switched off. It is, however, known that neither the driver nor the passenger have fastened their seat belts.

The impact force was so great that the 26-year-old passenger – the driver's wife – failed. She died on the spot. The drunk driver was stuck in the car. After being removed from the wreck of the car, he was transported in a heavy helicopter from the Air Rescue Service.

The woman pointed to three young children. The driver was her 29-year-old husband, the father of the youngest child. He had a ban on a car to drive only under the influence of alcohol. He had been released a few months earlier. He had previously been convicted of mistreatment and extortion. He is threatened with a prison sentence of up to 12 years because of causing alcohol-related accidents.

An accident during the driving test in Szaflary. There is a decision by the court

A bus accident near Lodz. They are injured