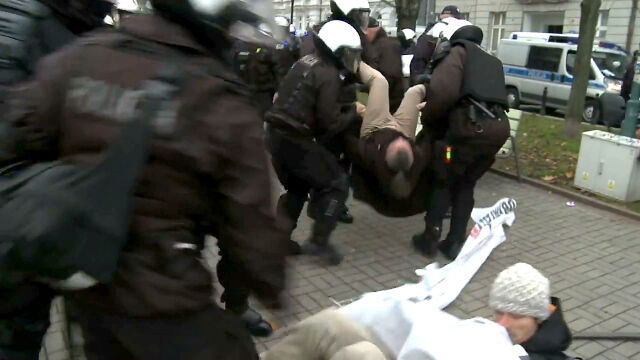 Four thousand zlotys of compensation that was illegally held during last year's national race was awarded by the court in Warsaw. In Częstochowa the prosecution of the prosecutor with regard to the T-shirts with the inscriptions "Konstytucja", which were hung from the monuments, ended on Wednesday with a decision to refuse an investigation.

The court in Warsaw decided on Tuesday that the man who was held in custody on November 11 last year receives financial compensation from PLN 4000. An activist of the citizens of the Republic of Poland demanded a larger sum – he demanded 20,000.

Just before the march of the nationalists started last year, the police held 49 demonstrators and kept them for several hours at the headquarters in Dzielna Street. The march started at 16.00, but already 20 minutes earlier the police stopped the group to prevent people demonstratively.

– About 50 people who tried to show disagreement about this kind of celebration of Poland's independence, such as slogans, with such flags – the green flag of Falang – were tightly attacked by troops – said Tadeusz Jakrzewski, who received 4,000 zloty of compensation.

The victim also said during the March 11th March that "the police have the right to identify every citizen, we have invoked the justification of the intervention and the means used".

– We were not only transported to the police station, but all detention – depending on the persons – lasted three to five hours. I left the command in Dzielna after noon, "he added.

The first of nine applications

9 people filed a claim for damages. Tadeusz Jakrzewski is the first to whom the court has awarded compensation. The processes of subsequent people were postponed to August and the end of September.

– I believe that this kind of police intervention is unlawful and illegal at some point, insufficient for the situation. The use of such means can cause stress, fear of people who have a holy right to manifest themselves – said Jakrzewski.

T-shirts with the inscription "Constitution", which were hung on various monuments in Częstochowa, were not offensive – the prosecutor said on Wednesday. In one case she refused to investigate and in the second case she stopped the case before the opening.

Spokesman for the Regional Prosecutor's Office of Częstochowa, Tomasz Ozimek, stated on Wednesday that there were recently two provisions concerning the suspension of inscriptions "Konstytucja" on the monuments in Częstochowa. The first concerned the monuments of Halina Poświatowska, Marek Perepeczka and Władysław Biegański. T-shirts on these famous figures associated with Częstochowa appeared on August 4.

Article 261. Anyone who offends a monument or other public place in memory of a historical event or to celebrate a person shall be fined or imprisoned.

– In this case, the procedure ended with a decision to refuse an investigation because of the statement that the act does not contain the signs of a prohibited act. The decision is final – said the public prosecutor.

The case was investigated in terms of Article 261 of the Criminal Code. This provision speaks of insulting a monument or other public place, designed to commemorate a historical event or to celebrate a person.

– It turned out that these inscriptions were not offensive, they were not vulgar. It was not established that such behavior deprived him of insulting the insult of a monument or other crime – explained prosecutor Ozimek.

Article 63a. § 1. The person who places an advertisement, poster, placard, appeal, folder, lettering or drawing in a public place, or publicly places it in another place without the permission of the administrator of that place, is subject to the penalty of restriction of freedom. or a fine.

The prosecutor's office, which investigated the case, pointed out that the suspension of t-shirts on monuments can be a violation under Article 63a of the Code of Criminal Offenses. It is about placing a notice, poster, poster, appeal, folder, lettering or drawing in a public place that is not intended for that purpose. The case will be explained by the police.

The justification is similar

The second case concerned the hanging of the inscription "Konstytucja" at the monument of Marshal Józef Piłsudski in Częstochowa. In this case, the study was stopped before it was initiated. The reason for the decision is similar to the first one.

T-shirts with the word "Constitution" have recently appeared on many monuments around the country. It is an initiative of the Democracy Defense Committee. After hanging the shirt on the monument of Halina Poświatowska in Częstochowa, the action was supported by the poet of the poet, Zbigniew Myga.

– I am proud that Halina Poświatowska, and thanks to her in one way or another and I, participate in this action "- said Myga" Gazeta Wyborcza ".