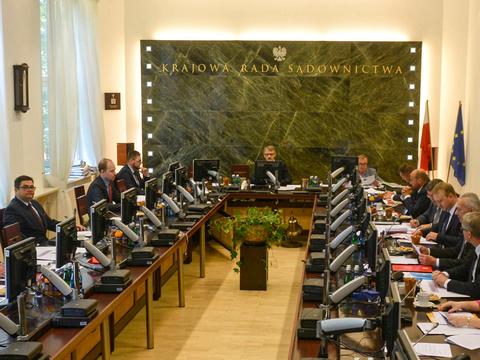 From Monday to yesterday, four KRS teams led hearings with candidates for vacancies in the Supreme Court. The committee dealing with the disciplinary chamber consisted of the judges Dariusz Drajewicz, Rafał Puchalski, Jarosław Dudzicz, Grzegorz Furmankiewicz and MP Stanisław Piotrowicz (PiS). There are 16 vacancies in the newly created Disciplinary Chamber.

"Publicity has its limits"

Today, the team members presented the numbers of 63 candidates they had listened to during the day during the day. Of these, 12 were recommended to the Council to present the president to the judges of the Supreme Court. Six prosecutors, three legal advisers, two judges and one academic staff member were among them. Earlier, the National Court of Appeal refused the request of its member, MP Borys Budka (PO), to make the minutes of the hearings of the candidates available and to postpone the meeting for a week to achieve this. Budka also wanted all candidates to be heard publicly throughout the national judicial register.

Approx. h. 18 The Council voted on the applications. It took place in secret mode at the request of the judge Teresa Kurcyusz-Furmanik. Behind the public choice of judges said the Supreme Court: deputy chairman of the national court Wiesław Johann. – Implicit voting will give the impression that the National Court Register wants to hide something from the public. Social control is an extremely important tool, especially now, when the reform of the judiciary is highly criticized, it is known in what environments – said Johann. In the end, President Leszek Mazur recalled that "transparency has its limits", and the vote can be classified at the request of every member of the National Court Register.

The National Council for the Judiciary has chosen 12 people who will nominate the president for appointment in the disciplinary chamber. These are exactly the same people who were recommended by the team that led the hearings and which were all selected at the first vote.

Due to the fact that the number of vacancies in the room is 16, there was still a vote, which was supposed to fill four remaining seats. None of the candidates received a single vote "for". That is why the National Court Register has adopted a resolution to present only 12 people to the president. Below is their list.

Chairman of the National Court of Justice: the Chamber can work in a composition of 12 persons

At the briefing after the vote, the chairman of the National Court Register Leszek Mazur stressed that the possibility to fill four vacancies in the Disciplinary Chamber is related to the possible announcement of the next competition for these positions. – Then the whole procedure must be repeated, starting with the announcement by the President of the existence of such vacancies and the whole procedure is subject to repetition from the outset, this is a completely new competition – Mazur said.

– We could, in the context of this competition, take into account one, two or three persons who meet the required legal criteria, but no more than 16 – he added. When asked whether the disciplinary court in the Supreme Court can function in a composition of 12 persons, he replied that if an optimal number of 16 posts were considered, each less function means less efficiency and limited legal capacity.

– A compromise must be reached between the expectations of the optimal size of this section and the requirements for the qualifications of the candidates – said the president of the national court. Mazur said that three judges are the minimum number of MPs that would guarantee the possibility of its functioning, and that is why the chamber will be able to work in a composition of 12 people. – The functioning of this room is not based on any principle of the majority, that is, even a few judges of this chamber, and not a complete composition, it gives the opportunity to act – he added.

When asked when the resolution goes to the president, the president of the National Court Register answered that it is asking for a detailed study, which will last "several tens of days". When asked why the election of the candidacy was secret, he stated that this was allowed by the regulations and decided purely technical issues.

Mazur, when asked how he judges the fact that the majority of the selected candidates are prosecutors, replied that the selected persons are "prosecutors with the highest qualifications". Asked about the issue of the independence of prosecutors, subordinate to the Minister of Justice to the Attorney General, he said that the ultimate judge of the Supreme Court would mean that the relationship with the past & # 39; can not influence their work.