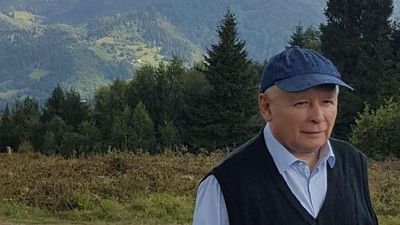 The head of the Ministry of Internal Affairs and Administration, Joachim Brudzinski, published on Twitter photo's of his leave in the Beskid Sądecki, where he chose Jarosław Kaczyński with PiS president. The photo was sought by PO MP Michael Szczerba, whose entry met Brudziński's quick response.

On Sunday, on the Twitter profile of the head of the Ministry of Internal Affairs and Administration, photo's of the holiday in the Sądecki Beskids appeared, of which both politicians chose. On one of the photos, Brudziński added that Kaczyński "worried about the state of opposition in Poland." The issue aroused the emotions of many commentators, with Michał Szczerka at the forefront. The PO delegate did not like the outfit of the PiS president. Brudzinski quickly referred to the entry.

The president is very fond of this blue shirt, dark cardigan and gray trousers. In this set he was already on holiday in 2016 ➡️ https://t.co/5CcIWfkerL pic.twitter.com/jDyqMFQXBG

But many Photoshop specialists today on TT😂 I will give you good advice (boy, specialist can also queue without a toilet) give me peace of mind. If you've eaten a thousand chops and asked the European Commission for help, it's nothing to sip you and spell reality …