Tragedy in Darłówko. The family issued a statement 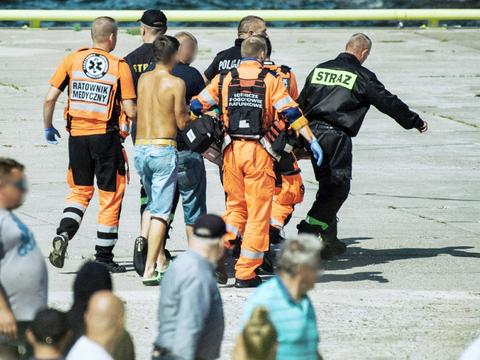 "In the name of the parents of the tragically deceased children, despite numerous attacks on them, we declare that the parents have done their best to protect the children from the tragedy." It is not true that the children were bathing or swimming in the water near the red flag. she stayed alone with them on the beach, both parents were present.

At the moment my mother and her youngest son went to the dunes, the rest of the three pools took care of Dad. The children bathed away from the breakwater and other people were bathing along the entire beach. Both parents were subjected to a breathalyzer test and were sober. Because in the matter the media and public opinion have already pronounced a judgment, recognizing parents as inadequate children and these statements before the formal opening of the procedure by the prosecution, despite the many doubts about the labeling of the swimming and rescue operations, his parents were forced to request the prosecutor despite the great grief processing on the beach, indeed, everything went according to the art and whether the way to mark the bath was correct, or everything was done to avoid the tragedy and all rescue operations were correct performed, "reads the family statement.

The relatives also appealed to respect the dignity of parents of tragically deceased children, on behalf of their parents they also thanked all those who support them in this difficult time.

Recall. The tragedy took place on August 14th. Parents Anna and Damian K. with four children – 2 year old Adasa, 11 year old Zuzia, 13 year old Kamil and a year older Kacper went to the beach. They spread in a place marked as Black Water Point. It means a complete swimming ban at this place.

It was windy that day. The waves reached about a meter and a half. Under these circumstances three children of the K-state came into the water. Parents stayed on the shore with the youngest child. When Mrs Anna came back from the toilet with the youngest Adas, it turned out that the children were gone.

After fifteen minutes, the unconscious Kacper was dragged out of the water. Unfortunately, the boy died in the hospital. The search for Zuzia and Kamilek continued at sea. On Friday, the body of an 11-year-old girl was found and on Saturday the body of the boy was fished from the sea. The parquet in Koszalin has already confirmed that they are wanted brothers and sisters.

Tragedy in Darłówko. "For sun worshipers is another attraction"

The Baltic has kidnapped brothers and sisters. Was the body of the last child found?