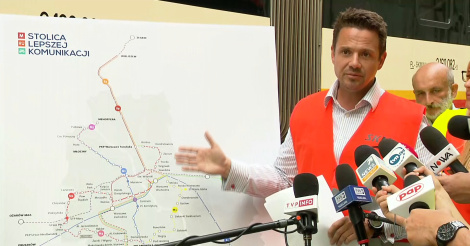 On Wednesday, the candidate from the Citizens & Coalition presented his vision on public transport in Warsaw. And he promised to plan and even build new metro lines.

– The capital of better communication must be well planned and it must be a system. A system that reconciles the interests of everyone who uses public transport, but also that of cars, and sometimes pedestrians and sometimes cyclists – said at the start of his Wednesday conference Rafał Trzaskowski, candidate of Civic Platform and Modern Platform for the President of Warsaw.

He presented a plan for the expansion of the metro network and Szybka Kolej Miejska. He announced that he will be making proposals for trams in the coming days, but also those that would help drivers, i.e. parking spaces.

Trzaskowski stated that he would continue the current project of extension of the second metro line. He is, however, planning to supplement it a bit. He wants to extend the built-up line in both directions. In his plans on the east side, instead of Bródno, he would end in Żerań, and on the western side, instead of in Morach, he would reach Ursus.

The candidate also extended and improved the functionality of the first line. According to his concept, she would first reach Młociny to the North Cemetery and then to the other bank of the Vistula, or to Białołęka near Mehoffer Street (it was marked as the fifth line on the diagram).

He also plans to build two stations in the city center: on the Konstytucji Square and in Muranów, and also to establish a connection between the Center Station and the Warszawa-Śródmieście Station, which has been announced for years.

Now passengers who pass through this place have to go to the surface.

But the most striking promise is "plan and even build" in the first term of the third metro line.

It has a rather surprising course. It would start in the National Stadium, via the eastern train station, Rondo Wiatraczna, Gocław, Siekierki, Dolny Mokotów, to the southern railway station or the metro station Wilanowska.

Trzaskowski has not mentioned how these plans are for the planned construction of the tram line to Gocław.

The fourth rule, because the candidate who promised Wednesday, would start with the Wilanowska metro and drive west, through the office center in Służewiec, Raków, Skorosze and end, like the extended second line, in Ursus.

In his opinion this would allow to solve the communication problems of "Mordor" and its employees.

Construction of new metro lines The main opponent of Trzaskowski, Patryk Jaki, also promised less than a month ago. However, he presented a slightly different concept.

The third subway line proposed by him runs from Białołęka to Wilanów. On the other hand, the fourth metro line would run from Marysin Wawerski to Ursus.

For example, according to Patryk Jakiego, a metro would look like this: