Which: I caress Warsaw – Mokotów

poland September 30, 2018 Nation, poland Comments Off on Which: I caress Warsaw – Mokotów 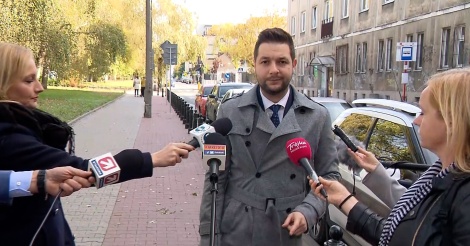 Patryk Jaki has once again announced that he will liquidate some of the posts in the streets of Warsaw. He also argued that he would conduct an audit regarding their establishment.

The United Right candidate for the Mayor of Warsaw met with journalists in Madaliński.

– In the city hall that is managed by the Civic Platform, I hear that there is no money for the construction of new parking spaces. Moreover, parking spaces are mostly missing. There are no resources for parking garages, but there are parking spaces, he said.

And he pointed to the stations on Madalińskiego Street. – If someone explains me rationally why these posts are here and cars are on the street … And there are many such places in Warsaw – he argued.

– When I become the president of the capital Warsaw, I start with a real parking policy and I will take away Warsaw. Warsaw needs a wise policy that is not aimed at irrational fighting with drivers.

In his opinion, they will opt for collective communication if it is at the right level.

And did you set how many such messages are? – asked journalists. – Almost no one can make such a statement. The beams will appear constantly, everywhere, the residents regularly protest, nobody consults them. I am curious about how much it costs because they constantly change the shape of these posts – Jaki said.

He also announced that he would conduct an audit if he became president. And he will tell you how much it costs to set up the posts.

At the request of the residents

As Gazeta Stołeczna informed, the bars were in Madaliński, at the place where the United Rights candidate organized her conference, at the request of the residents. They had a problem with the use of the sidewalk that was stuck with cars.

Patryk Jaki has also not explained how he wants to fight with drivers who park in conflict with the regulations, making it difficult for pedestrians to use sidewalks.

Patryk Jaki in August in "Facts after facts" TVN24 stated that some of the posts on the roads would disappear.