Why is Prime Minister Morawiecki misleading about Adelajd? 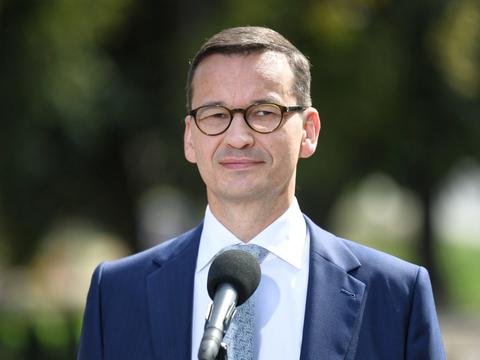 – Regarding the purchase of Australian frigates, there were no decisions by the Ministry of Defense or my blocking decision – Prime Minister Mateusz Morawiecki said in an interview with PAP. Meanwhile, Onet's correspondents confirm that the decision to withdraw from the signing of intent documents during the visit of the President to Australia was made before August 15. It was taken at the highest levels of government and PiS.

The war for Australian frigates

The first information from the Ministry of National Defense on the possible blocking of the signing of a letter of intent by Prime Minister Morawiecki was received between 12 August and 13 August by the head of the chancellery of the President Krzysztof Szczerski and the head of the BBN Paweł Soloch.

The arguments that accompanied this decision were mainly related to local government elections and PiS leadership, convinced that the purchase of used frigates could have a negative impact on the support of their voters in Pomerania. – The shipbuilding industry is waiting for offers from the government to start construction of ships and ships for the navy. These are a huge amount of money and jobs – one of the influential PiS politicians, who knows the story behind the scenes. He admits that the shipbuilding lobby, which has enormous support in the Ministry of Maritime Economy, Marek Gróbarczyk (a good friend and employee of Jarosław Kaczyński), felt threatened by the possible purchase of Australian frigates.

Minister Gróbarczyk gave the floor a few days before the President's visit to Australia. – We do not agree to buy old Australian units and in this way hinder the construction of new corvik defense vessels in Polish shipyards under the Czapla and Miecznik programs – he said in an interview with "Portal Shipyard ".

He was responded by Defense Minister Mariusz Błaszczak on television Trwam. He stressed that the army would order ships in Polish yards, but these can only be produced in a few years and the navy needs them now. – Purchasing type of frigates of the Adelaide type is a bridging solution – stressed the head of the Ministry of National Defense.

The feast of the army in the shadow of Adelaide

August 15. Polish day of the army. From the special stand a major military parade is observed by the main politicians of the ruling camp: President Andrzej Duda, head of the Ministry of Defense Mariusz Błaszczak, then the speakers of the Sejm and the Senate. There is also Prime Minister Mateusz Morawiecki.

Defilada, who this year passed Wisłostrada, was a success. Thousands of people came to see the marching soldiers and their equipment. There was a festive atmosphere between the crowds. Completely different from the ones in the stands. The politicians assembled there knew that within a few hours a bomb would be fired. It is about the visit of the president and the defense minister in Australia. The main point was to sign a letter of intent to buy nearly 30-year-old frigates from Adelaide. At the last moment, Prime Minister Morawiecki objected. The president's environment tried to save the situation. In the evenings, when a picnic took place in the gardens of the presidential palace and the celebration of the Polish army ended, nobody had any illusions. The Prime Minister will not speak out, especially because he had the support of the PiS head Jarosław Kaczyński.

The head of the BBN, Paweł Soloch, resigns from the outlet to Australia. – In this situation it did not make sense to go there – says our informant from the presidential palace and adds: – President, he was furious. He knew the case would end with shame, but he could not cancel the planned visit for many months – says our informant.

The head of the Ministry of National Defense, Mariusz Błaszczak, does not know whether he should cancel his visit to Australia. The departure of the MON delegation was scheduled one day later than the president. Minister Blaszczak was in the country when the journalist "Polska The Times" Piotr Zaremba revealed information about blocking the purchase of Australian frigates.

Minister Blaszczak did not want frigates?

The Minister of Defense did not mention this. On 16 August, Onet unofficially confirmed Piotr Zaremba's information to an official from the immediate vicinity of the Prime Minister. Then we heard: "indeed, according to Prime Minister Mateusz Morawiecki, Australian frigates are out of date, they do not meet the requirements and are not adapted to the needs of the Polish forces." The official, when asked why the Minister of Defense was so involved, said: "Minister Blaszczak has never been so enthusiastic about buying frigates."

However, it seems that only the head of the Ministry of Defense has done quite a bit to complete this contract and to defend it to the end. Portal wp.pl. Referring to the PiS policy, he claims that the Minister of Defense on 13 August during the interview on television Trwam has learned that government support for the project to buy the Australian frigates has been withdrawn. Błaszczak even tried to convince Rydzyk's father that the purchase would strengthen the navy. During the interruption of the program, Prime Minister Mateusz Morawiecki had to call the head of the Ministry of Defense and said that we would withdraw from the signing of the memorandum.

Undoubtedly Minister Blaszczak is a big loser in this case. It was from the Polish government that negotiated the purchase of ships with Australia. After months of difficult discussions, document exchanges and day to day analyzes, he had to close the case and explain to the Australian side why Poland is withdrawing from the purchase at the last minute. All the more because a Polish military delegation was sent at the invitation of the local Ministry of Defense. They looked at the frigates of Adelaide. They also got to see their weapons, equipment and possibilities.

A long journey, for what?

The defense minister in Australia flew on 17 August. He returned four days later. His delegation consisted of two representatives from the Ministry of Defense Policy and Protection of Armaments. What was the effect and plan of the visit? The Ministry of Defense did not answer these questions. After the delegation's return to the Ministry of Defense's website, there is only a brief comment that "the visit of Minister Mariusz Błaszczak to Australia and the meeting with the Minister of Defense and Defense of this country the mutual defense cooperation of both countries has strengthened and is the basis for the signing of a future agreement on cooperation in this area ". The Ministry of National Defense also announces that no decisions have been taken regarding the purchase of Adelaide frigates. So it seems that Minister Blaszczak has withdrawn, at least for the time being, from the idea of ​​buying Australian frigates.

Prior to the purchase, Adelaide opted for fairly influential contacts, especially in the presidential palace – Shipbuilding Council. According to our interlocutors, think this opinion, including they were naval officer, they convinced the president's employees to buy ships from Australia. Why?

– If we do not get ships, in two and a half years, several hundred seafarers will only be able to fish in the Baltic Sea – he emphasizes and adds: – The biggest brake for shipbuilding at Polish shipyards is shipbuilding by the navy, the collapse for many would mean the end eldorado shipyard. In addition, there is a lack of directional decisions in the government and the Ministry of Defense regarding the modernization and defense system of our coast. Without this, nothing will change in principle, and the Polish shipyards, which are ready to build new ships, will continue to grow moss to the delight of our neighbors.