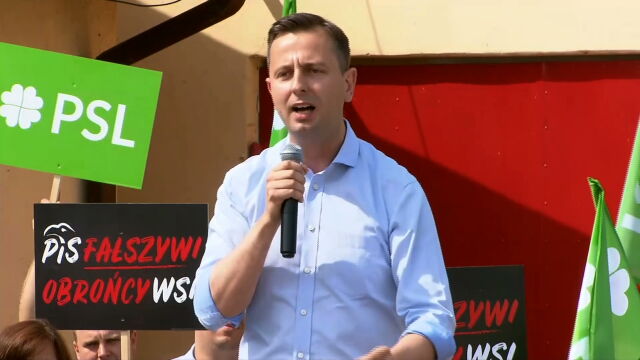 The PSL will stop the PiS, which is a false defender of the Polish village – said the head of PSL Władysław Kosiniak-Kamysz in Rębów at Wyszogród during the farmers' protest against government policy. – Here is Poland and there are its hosts, those who work hard from sunrise to sunset, Prime Minister Morawiecki, – said Kosiniak-Kamysz, arguing that "the PSL represents the real popular movement, and the name of this party is also its program." .

Farmers protest against PiS policy. On Saturday, in the Masovian province of Rębów, on the 72nd anniversary of the farmers rally, the farmers' protest took place with the participation of the PSL president Władysław Kosiniak-Kamysz. Farmers from different regions of Poland demand specific actions of the government with the help of combating the effects of drought

About 100 farmers and PSL activists participated in the rally organized for the Volunteer brigade, mainly from the Płock poviat. Also present were Mazowsze Marshal Adam Struzik and the MP Ludosław Jarosław Kalinowski.

– We will stop the fake defenders of the Polish countryside, stop the PiS, stop the fraudsters. We will restore Poland and the judiciary, and the law – the president of the PSL has announced, address the participants of the protest.

He argued that the PSL represents "real popular movement" and the name of this party is also a program. – Here is Poland and here are the hosts, those who are prime minister Morawiecki from sunrise to sunset, work hard – persecuted Kosiniak-Kamysz with an exalted voice. At the same time, he accused the head of government that earlier, when he was deputy prime minister, he did not register a program for a Polish village in the so-called "Plan Morawiecki."

Kosiniak to Morawiecki: for the first time in my life Lord of the barn

At the end of July, Prime Minister Mateusz Morawiecki and Minister of Agriculture Jan Krzysztof Ardanowski presented a program for farmers. The so-called. The "Plan for the village" presupposes, among other things, higher co-financing of agricultural fuel, the establishment of the national food holding, more direct sales and retailing of agricultural products, support for high-quality production and support for mountain farming

– You loved the village today. You're gone, maybe for the first time in my life I even saw the barn how they organized the conference. You went through the field in a suit. You even wear rubber boots – said the president of PSL, referring to the recent press conference of Prime Minister Morawiecki, who called the "plan for the village". – But you do not feel the village, do not understand it, do not know it, and the worst of all is that you do not care about it – he added

"Do not read farmers, just help."

Criticism of the government's actions in agriculture, Kosiniak-Kamysz exchanged opinions among farmers themselves: "how difficult it is to support the family, what is the fear, how people are divided." [1945926]

– The division of society is the worst thing that this government has done. He has divided, argued, is destroyed, because he is afraid of us, he is afraid of the unification of the Polish village – said the head of PSL

– This damage is necessary here and now. It is necessary to cancel another part of the agricultural tax, which must be paid in September. This is PLN 400 million. And return this money to the local government, because local government officials want to help. It is not as the rulers say that it is the fault of self-government that there is no estimate of the loss. Does not read farmers, does not educate local authorities, but helps – said Kosiniak-Kamysz, who is reviewing the government's actions.

"Due to the failure, tumblers came to the fact that ASF flooded all of Poland"

The president of PSL also referred Saturday to activities related to the control of ASF [Afrykańskiego pomoru świń – red.]. According to him three years ago there were only three eruptions of ASF near the border with Belarus, and now there are almost 200. – By a wrong, stupid policy, by the losers, by the tumans that dealt with this problem, it happened that ASF over the edge of the earth flowed for the whole of Poland. Today it is even in the Podkarpackie Voivodship – Kosiniak-Kamysz said, at the same time asking "what farmers have to do, who have lost their life's work, who helps them."

"Poland is helpless, in a bank"

to the government and the PiS program the president of the PSL also asked: – Where were you, how thousands of Polish farmers demanded help on milk quotas? And he answered: – You were then with promises that those who have been overpowered will be punished, everything will be redeemed and given back. You did not do it.

Kosiniak-Kamysz also accused the government of the fact that Polish farmers have limited opportunities to sell their products because of their actions in the international arena. – Because you have argued with everyone. This is another big accusation against this power. There is no relationship with the East, there is no trade with the East, there is no sale of the best agrofood products. But the import of gas, oil, coal from Russia to Poland is what righteousness is for Polish farmers, a Polish farmer can not sell vegetables there. They want their conscience to embalm. And they argued with the East and now with the West. Poland is alone, Poland is defenseless, Poland sits on the bench – said the president of PSL, and the participants in the meeting sang "shame and disgrace".

– We will, as always, demand the Polish countryside and Polish agriculture. Not only when the election time has expired. Because the Pharisees go to Sandomierz to promise tomorrow, to talk to the public about the Plan for the Land. Plan for the village is a plan for the elections. And after the elections the end, as it was during these three years – Kosiniak-Kamysz judged.

Marshal of Masovia: the Polish countryside wakes up

At the meeting in Rębów, the president of the Polish People's Party appealed to the unification of the farmers and Polish villages. – Let's not lose faith in the better future of Poland, but it depends on us, on our cooperation, on our unification, on our determination –

Marshal of Poland Mazowsze Adam Struzik argued in turn that the villagers did not for PiS voted. – Polish countryside, wake up. If you vote again this time in the elections for these people, you will be fooled again, there are only two other areas – because they have already graduated from the Constitutional Court, they have confiscated the courts for a large part. – local authorities and free media, those private media that are still free. If they get it, we will have a totalitarian system in Poland. And I know what I'm saying. Let Poland wake up – said Struzik.