Balcerowicz, Belka and Gronkiewicz-Waltz with regard to former presidents of the Financial Supervision Authority

poland December 13, 2018 poland Comments Off on Balcerowicz, Belka and Gronkiewicz-Waltz with regard to former presidents of the Financial Supervision Authority 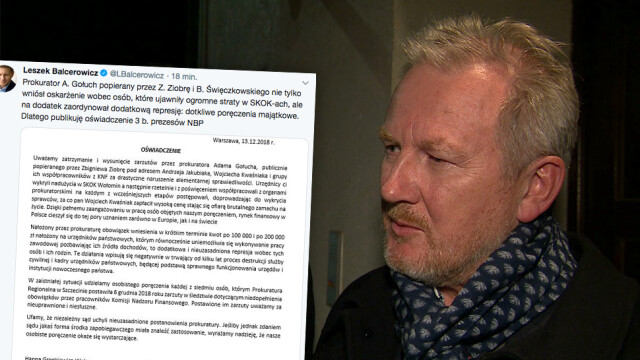 Three former CEOs of the National Bank of Poland – Leszek Balcerowicz, Hanna Gronkiewicz-Waltz and Marek Belka issued a statement on the detention of the former management of the Polish Financial Supervisory Authority. "We believe that arrests and accusations (…) are directed against Andrzej Jakubiak, Wojciech Kwaśniak and a group of their employees of the Polish Financial Supervision Authority (KNF) for a drastic violation of basic justice", they write.

Last Thursday, on 6 December, the Central Anti-Corruption Bureau was arrested by seven people – former head of the Polish Financial Supervision Authority, Andrzej Jakubiak, former deputy head of the KNF, Wojciech Kwaśniak and five former officials of the Polish Authority for Financial supervision. In the office of the public prosecutor in Szczecin, all have heard that they have not fulfilled their obligations with regard to the supervision of SKOK Wołomin.

On 7 December, three former CEOs of the National Bank of Poland – Leszek Balcerowicz, Hanna Gronkiewicz-Waltz and Marek Belka – issued a statement in which they rated the action as "a shocking detention by public prosecutors of people who abuse in the SKOK system, a new blow is focused on Poland's reputation ".

On Thursday, December 13, the three issued a new statement on detentions. It concerns Public Prosecutor Adam Gołuch, who charges against persons of the former management of the KNF. They were published on Twitter by Leszek Balcerowicz.

"We are considering detention and prosecution of public prosecutor Adam Goluch, advocated by Zbigniew Ziobro to Andrzej Jakubiak, Wojciech Kwaśniak and a group of their colleagues from the Polish Financial Supervisory Authority for a drastic violation of basic justice", writes three former NBP governors.

Next, Leszek Balcerowicz, Hanna Gronkiewicz-Waltz and Marek Belka said that "these officials discovered abuse at SKOK Wołomin and then cooperated reliably and diligently with prosecuting authorities at each of the earlier stages of the proceedings, leading to the investigation of perpetrators, for which Mr. Wojciech Kwaśniak paid a high price, the victim of a brutal murder. "

In the statement, the former NBP governors also referred to the guarantee that was imposed on the detainees of the former management of the KNF.

"The prosecutor's obligation to pay short-term amounts of 100,000 and PLN 200,000 to government officials, which at the same time make it impossible to do work by depriving them of their sources of income, is an extra and unjustified repression against these people and their families." it reads. statement.

"These actions are negative in the process of destroying the civil service and staff of state officials who have been the basis for the efficient functioning of offices and institutions of the modern state," the former NBP governors write in a statement.

Balcerowicz, Gronkiewicz-Waltz and Belka point out that "in this situation they offer a personal guarantee for each of the seven people to whom the regional prosecutor's office in Szczecin has complained in the investigation into the failure of employees of the Financial Supervision Commission".

They add that the accusations against people of the former KNF management are considered "unauthorized and wrong".

"We are confident that an independent court will revoke the unjustified decisions of the public prosecutor's office, but if in the opinion of the court some form of preventive measure must be applied, we hope that our personal guarantee will be sufficient" – they add in the statement.

Play: President on the anniversary of martial law: that evil will be removed and trampled on

On the 37th anniversary of martial law, President Andrzej Duda said that "that evil will be removed and trampled on." – I'm for you …
read more »

A snowy night is for us. The largest part of the country will also be on Friday. Thermometers will have a maximum of two …
read more »

34 percent of those who declared themselves willing to participate in the elections for the Sejm would vote for United Right, 27 …
read more »

Play: "Anyone other than us, Poles and Germans, can work together towards cohesion, towards the unity of Europe"

– Poles have the right to talk about the extent of losses and casualties suffered during the Second World War, the discussion in Poland …
read more »

Information about the investigation, which was provided by the national public prosecutor Bogdan Święczkowski, is selective …
read more »

Play: they want to refer to Bierecki. Karczewski: I will not ask for it

I am not going to apply for the resignation of PiS senator Grzegorz Bierecki, wrote Senate speaker Stanisław …
read more »

Play: Timmermans about the rule of law in Poland. Morawiecki: he is in election mode

Without resolving all problems relating to the rule of law in Poland, there can be no question of ending the procedure in Article 7 …
read more »

Until the end of the week, the synoptics expect snowfall, in some places that pass. The new week generally brings a happy appearance …
read more »

Play: "We have good news for the opposition." Protasiewicz delegated to Modern

PSL-UED deputy Jacek Protasiewicz joined the deputies of the representatives of Nowoczesna, which means that Modern will again have a club in …
read more »