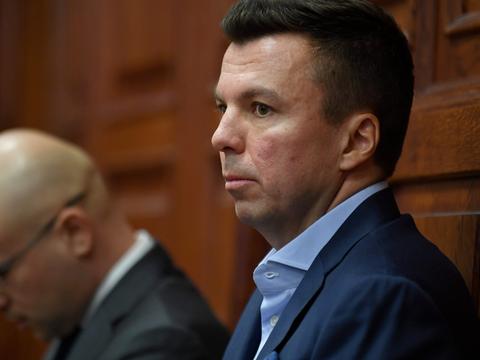 Marek Falenta was sentenced in prison for 2.5 years in 2016 by the regional court in Warsaw. The businessman was punished in connection with the so-called eavesdropping scandal. The judgment became final in December 2017.

Defenders Falenty appealed to the Supreme Court. At the beginning of October 2018 the court in Warsaw rejected the motion of defenders of Marek Falenta to postpone a sentence of 2.5 years in prison in connection with the so-called eavesdropping scandal. At the same time, the same court suspended the execution of the sentence until "every complaint was considered".

In his testimony, the waiter Łukasz N. stated that Marek Falenta advocated his influence in the PiS. – It is a lie. I had much better contacts with PO-PSL politicians. My only contact with PiS, if it can be described at all, was from Grzegorz Kuczyński, a member of the Supervisory Board of my company, who was represented in various legal proceedings by politicians of this party – Falenta answers.

Kelner Konrad Lassota and Krzysztof Rybka were sentenced to 10 months suspended and fined. The court abandoned the punishment of the waiter, Łukasz N., and ordered him to pay 50,000. PLN for a social purpose.

The talks that were unveiled every week in the Wprost caused a crisis in the Donald Tusk government in 2014. The case concerned the inclusion from July 2013 to June 2014 in Warsaw restaurants of people from politics, business and government officials. She registered among the then chiefs: the Interior Ministry – Bartłomiej Sienkiewicz, the Ministry of Foreign Affairs – Radosław Sikorski, the Ministry of Infrastructure and Development – Elżbieta Bieńkowska, NBP President Marek Belka and the head of the CBA Paweł Wojtunik.

There are accusations in the press that Jarosław Kaczyński ran a company, that he – as a deputy – was forbidden by law. In fact, such a general prohibition does not exist, and the question of the legality of doing business by parliamentarians is more complicated.

Gazeta Wyborcza yesterday published a report of a conversation between Jarosław Kaczyński and an Austrian businessman Gerald Birgfallner, in which the PiS president is negotiating the construction of a skyscraper in the center of Warsaw. The plans for such an investment were connected to the Kaczyński community, Srebrna. In the end they were not implemented because of the lack of necessary documents from the city and the interest of the media in the case.

Today, "GW" presented further information about the project. According to the publication, Kaczyński met 19 times between May 2017 and August 2018 with the Austrian at the headquarters of his party at ul. Novgorod. "The PiS chairman did not even give the appearance of formalizing business meetings, he acted on behalf of Srebrna, although he can not do business as a deputy (this is prohibited by law on political parties)," read the newspaper.

A substitute can do business, but with exceptions

This issue is not that simple. The law, to which the authors of the text refer, prohibits the execution of business activities, but only to political parties. There is no possibility that the deputies or even the head of groups acting in their own name can not do it.

Can a deputy therefore be a businessman at the same time? As a rule, yes, although there are some restrictions. The constitution itself in art. 107 says that his economic activity can not be carried out "with gaining benefits from the property of the Treasury or local self-government".

The constitutional prohibition is extended in the law on the implementation of the mandate of a deputy and a senator. According to her, parliamentarians can not do business "using state or municipal property". Nor can they manage such an activity or be a representative or representative in its conduct.

In addition, a deputy can not rely on his mandate in business or use his parliamentary title. Every year it should also inform about running a business in a filed declaration of assets. In case of concealment of the truth, he can be prosecuted for making false statements, for which he is punished for six months to eight years in prison.

In the law on the implementation of the mandate of a deputy and senator in art. 33 There is another provision requiring the member to report his "additional activities" to the President of the Sejm. At the same time, these additional activities can not undermine 'voters' confidence to exercise their mandate'. In this case, violating the rules only leads to legal liability, such as a reprimand.

– A deputy may lead a company, but with restrictions in the constitution and in the law, which are intended to prevent the oligarchisation of the system, conflicts of interests and transparency in the legislative process – says Onet Prof. Ryszard Piotrowski, constitutionalist of the University of Warsaw.

A failed attempt to change the law

In Poland there have already been ideas that prohibit parliamentarians from attacking other interests than these citizens. In 2009, after the scandal of the senator PO Tomasz Misiak, whose company signed a contract with the Industrial Development Agency without a tender, changes in the law were announced.

The then chairman of the Sejm Bronisław Komorowski was in favor of this solution. – The best solution to protect Polish policies against this kind of temptation is to force people who have been elected in parliament to choose between the mandate and the company – he said in an interview for & # 39; Super Express & # 39; . Ultimately, however, the ban on combining politics and business has not been introduced.

How do the rules apply to the PiS President case?

Based on what we know so far, MP Jaroslaw Kaczynski has violated the law on businessmen? First of all, it must be determined whether his actions qualify as running a business. The investment would be carried out by the Srebrna company and related two Nuneaton companies (a partnership with a limited partnership and a limited partnership with the same names). Jaroslaw Kaczynski is not on the boards of directors or on the board of directors of any of them, nor does he know that he should have a proxy from them.

The PiS president is admittedly a member of the Instytut im. Lech Kaczyński, the majority shareholder of the Srebrna company, but sitting in this management is difficult to classify as running a business. The question remains whether the active participation of Kaczyński in business negotiations did not mean that he actually operated the company Srebrna, despite the lack of formal permission.

The problem of asset declarations

What if we accept the interpretation that Jarosław Kaczyński has done business? The mere fact that he has done this as a substitute is not a violation of the law. In the light of the information available, the investment had to be carried out on land owned by Srebrna, without using state and municipal property. In the public report we do not hear Jarosław Kaczyński referring to the mandate of the deputy during the talks. It also does not mention the use of its function in the loan efforts for Srebrna of Pekao SA. It therefore seems that none of the conditions restricting the freedom of members' business activities is fulfilled.

If Jarosław Kaczyński would run a company, however, it would be the duty of the Members of the European Parliament to explain this. The PiS chairman did not do so in the statement of assets for 2017. He stated that he did not act as a manager, representative or representative in carrying out business activities. For the submission of ownership declarations for 2018 (in which the recorded conversation took place), delegates still have until 30 April.

The application for verification of Kaczyński's ownership declarations has now been submitted by Razem to the CBA together. – If MP Kaczyński is a formal or informal representative of this entity (Srebrna – ed.), He was obliged to mention the relevant information in his statement – explained the leader of the group Adrian Zandberg.

Finally, there is also the question of legal liability and a broader category of "complementary activities" which the MP must report to the Marshal and which can not undermine the confidence of the electorate. Professor Piotrowski points out that in this case the law is flexible and builds up a form of dialogue between the member and the presidency of the Sejm. – We are trying here to appeal to the rationality of deputies. After all, we are dealing with people of public trust who have the support of their voters behind them – he notes.

Also read the Onet interview – He has suspended the construction of the "Silver Tower". Jan Śpiewak: I feel good about it

Flood in Kraków and Małopolska. What happens on Friday? – Krakow.Wyborcza.pl

The Suflera stand returns to the podium. Krzysztof Cugowski will refuse his band members, he will become a new singer

Who collects the German asparagus? Poles can only dream of Poland

[Aktualizacja] Google Pay is not working. Take the card or save yourself with Blik – TELEPOLIS.PL