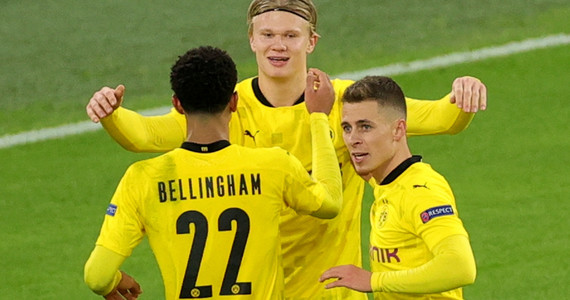 Borussia Dortmund has been flawlessly playing the Champions League matches in their stadium for a year now. Lucien Favre’s team played goalless with Barcelona in October 2019 and their rivals have not been able to score a point in Signal Iduna Park since then. On Tuesday, the players of Club Brugge heard about the power of BVB in their stadium.

The problems of the Belgian team started before the flight to Dortmund. There was an unusual stellar demonstration on the Club Burgge bus. Attacker Emmanuel Dennis could not sit in his favorite seat in the club bus and was therefore thrown out. The club flew to Germany without a Nigerian. After the return of the team, he will probably have a conversation with coach Philippe Clement.

The coach himself complimented his rivals for the game. The words of appreciation were addressed to Erling Haaland. The Norwegian had played 11 games in the Champions League before the game and scored 14 goals. – As a team we have to be ready to stop him, that is not possible with one player. He’s strong, he’s fast, and his greatest asset is his thirst for goals. I remember seeing him warm up. He was very dissatisfied when he missed one of the eight shots – said Philippe Clement before the meeting. The players took these words to heart, but there is no advice for the Norwegian. On the 18th, Haaland broke Club Brugge’s defenders, took a square pass from Jadon Sancho and confidently defeated Simon Mignolet.

The Englishman has received severe criticism from BVB fans in recent weeks. This season, he had a bad track record until Tuesday’s game, because that’s what you can call two goals and three assists. Just before the break, Sancho closed his mouth to critics. The midfielder approached the free kick and fired an indefensible shot from a distance of about 20 meters. A strong, perfectly curled ball fell into the window of the Belgian goal. In the first part of the match, the visitors were limited to disturbing the BVB players and not even fired a shot at Roman Buerski’s goal.

After switching sides, the game image did not change. The ambitious BVB players did not want to stop with a lead of two goals and aimed for more hits. With a player like Haaland on it, it was only a matter of time. Fifteen minutes after the match resumed, the Norwegian scored his sixth goal in this edition of the Champions League. In the confusion at Club Brugge’s goal, the BVB forward was offside, but the mistake was made by guest captain Ruud Vormer, who kicked the ball so unhappily that he hit the exposed Haaland, who hit Mignolet’s bottom corner without hesitation.

The favorable result and control over the match allowed Lucienovi Favre to introduce substitutes. Fans around the world have been waiting for 16-year-old Youssoufy Maukoko to appear. If the German took the field, he would be the youngest player in Champions League history at the age of exactly 16 and 4 days. The teenager did not get the chance on Tuesday and this name is still held (for 26 years) by Celestine Babayaro. In the 81st minute, Haaland was replaced by Marco Reus. The Norwegian failed to complete his hat-trick, but he must still be satisfied. He has scored 16 goals in 12 Champions League matches. Here it is worth recalling the results of Leo Messi and Cristiano Ronaldo. The Argentinian scored only twice in the same number of matches in the Champions League and the Portuguese never once. Erling Haaland is therefore well on his way to becoming the most successful footballer in LM history, even though his way up has only just begun.

The game played in Signal Iduna Park was not lacking Polish accents. Unfortunately, Łukasz Piszczek sat on the bench in Borussia the entire game, but it is worth mentioning the referees. The arbitrator of VAR in this meeting was Paweł Gil, assisted by Bartosz Frankowski.

Borussia eventually defeated Club Brugge 3-0. The Dortmund club has 9 points and is the leader of Group F for Lazio (8 points) and Club Brugge (4 points). Zenit Sankt Petersburg, who lost to Lazio 1: 3, closes the group table.

A match without an audience.