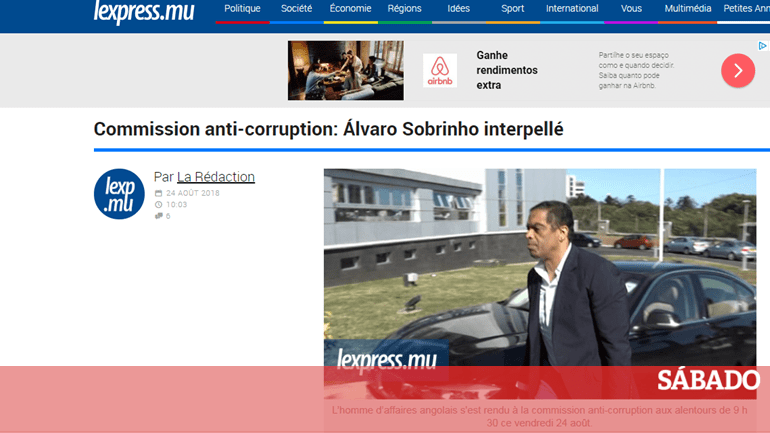 The former Angolan banker was heard by the Independent Commission Against Corruption for seven hours. The interview will be continued tomorrow

Álvaro Sobrinho arrived quietly in Mauritius on the night of Thursday 23 August. However, the landing of the former BES Angola Plaisance Airport, on the outskirts of Port Louis, the capital of the country, did not go unnoticed by the local authorities. Earlier this morning, 24, members of the Independent Commission Against Corruption (CICC), accompanied by members of the Special Support Unit, went to the luxury residential complex Royal Park to take Álvaro Sobrinho for questioning. . His office in Ebéne was also searched in his presence.

The banker started at 9.30 am (12.30 hours in Lisbon) and answered questions from the CICC for seven hours about, among other things, his investments in Mauritius. He left the building where the committee works at 4.30 pm, accompanied by the lawyer Moorari Gujadhur, authorized to return to his home. The interview will be continued tomorrow.

According to the local newspaper L & # 39; ExpressIt is expected that Álvaro Sobrinho will answer questions regarding the so-called "platinum card" case that led to the fall of the former president Ameenah Gurib-Fakim ​​in March of this year. The former head of state spent more than 20,000 euros on personal expenses, including jewelry and shoes, with a credit card from the Planet Earth Institute, an organization created by London-based Álvaro Sobrinho. says it wants to promote science in Africa. Although he ensured that expenses were inadvertently made and the value returned to the institution, the continuation of the suspicion led to his resignation.

At the CICC, which investigates the case, the name Álvaro Sobrinho has been mentioned several times in recent weeks, especially after the testimony of Ameenah Gurib-Fakim ​​and his former secretary Dass Appadu. According to local television, ION News, the latter took an unpaid leave to hold the position of CEO of Vango Property, one of the companies created by the Portuguese-Angolan businessman in Mauritius.

In addition to the "Platinum Card" case, Álvaro Sobrinho must also be heard about his activities and acquisitions in that African country. Several reports tell about the purchase of hundreds of villa's and apartments in the Royal Park complex – of which the chairman has also been heard

Suspicions about the activities of Álvaro Sobrinho in Mauritius began when it was heard that the businessman had spent about a million euros on luxury cars – the Jaguar and Range Rover brands – which he offered to relatives of influential people in the country like son of the deputy prime minister. Several news from the newspaper L & # 39; Express also aroused suspicion about how the former leader of BES Africa had a license to work in the banking sector.

The banking license of Álvaro Sobrinho, Africa Ltd, was suspected in March of this year after investigations started in August 2017 for providing "misleading" information.

In March 2017, Álvaro Sobrinho gave a conference in Mauritius that refused to follow favorable treatment and to ensure that the luxury cars he acquired were intended for employees of his companies and not for local politicians.

In addition to the Planet Earth Foundation, Álvaro cousin also founded in Mauritius A & A Fondation. According to the Correio da Manhã, the latter is led by the Portuguese José Pinto, a former director of Akoya Asset Management, of which Álvaro Sobrinho was also a shareholder, and who is in the epicenter of the Monte Branco case.