From Pinhal Novo to Caminha, the PS train has not been delayed for a minute interest 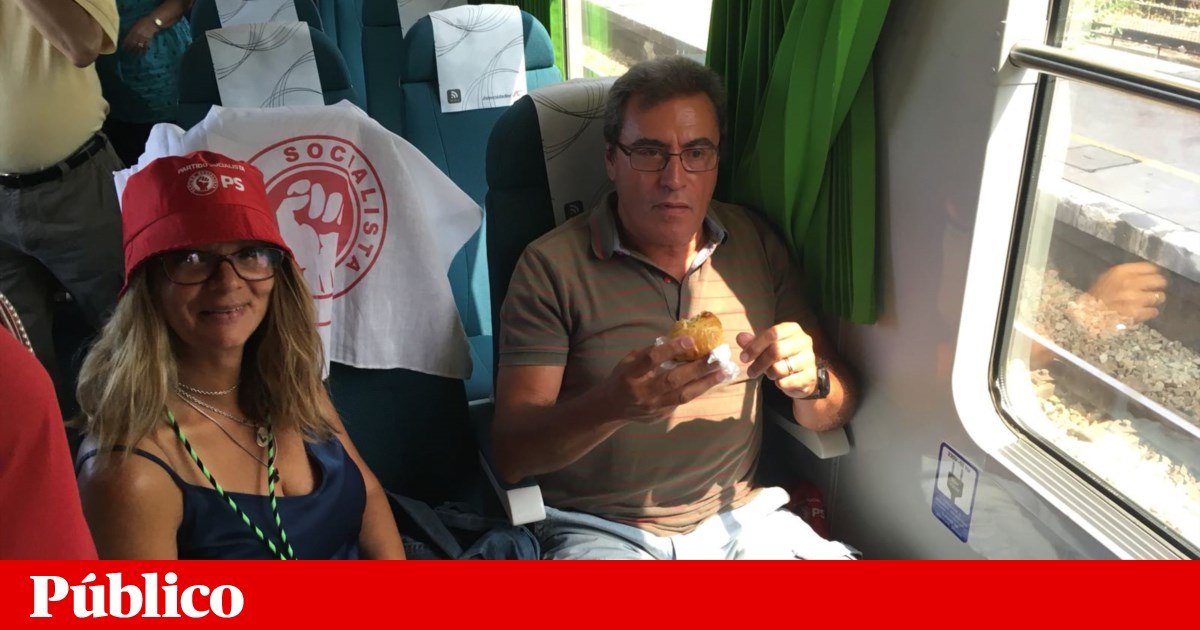 It is not a train of exhilarating joy nor a traveling rally. In the train of the PS there is a vivid, faint festive atmosphere, mostly made of complicity and laughter, and a natural and obvious – a great sense of connection prevails. After all, these passengers behave like a big family and exchange greetings, conversations and even farnels.

Departure from Pinhal Novo at 21.35, the special train nº. 13562/3 came half full (or half full) to Pombal and Coimbra. As the north approaches, however, more and more militants arrive until there are no places available. Caminha arrives with about 600 passengers divided by six carriages.

Augusta Barranha is from Leiria and came to Pombal by train. He says he even voted for PSD, but he would never vote on the CDS or the PCP. It was recently decided by the PS, but is a dedicated militant and has started an organized journey of the party for the first time. "I think it is a duty to participate," he tells the PUBLIC, informing the small group of socialists who entered Pombal and made a few freaks for the trip because he does not know if the train has food.

Ana Paula, also from Leiria, is enthusiastic about the train journey to Minho, but she insists that three weeks ago she went to S. Martinho do Porto with a friend and three children, bought a return ticket, but did not have a train to return. times, stopped at the station. She was rescued by a friend who went in search of the ill-fated group of bathers who had been left behind by CP. Last year Ana Paula was on the PS train to Faro and is ready for more trips.

Accompanying the group started in Pombal, Luís Guerreiro Rosa, technical teacher who lives in Alcobaça and who comes to the party of the return with the woman. In the carriage the conversation, now with comrades from Lisbon, flows from the part of Alcantara. This is the case of Helena Amaral, who comes with her father, who is already old, with whom she falls into attentions, tries to change her place because she is standing in front of the window, exposed to the sun. But the old man refuses. After all, it is protected on the head with a PS hat.

Helena Amaral is habitué in this procedure and in previous years Faro and Porto in the trains of the PS. "It is a way to bring together friends, militants and sympathizers, so we all know each other better, and we see him on the train so that we can move and go to other carriages to meet other socialists. We could not do that by bus, did you see what it was like to take the bus to Caminha? & # 39;

This is a "pas comme les autres"Because there is a special experience on board, even without big agitation or flags, the special number 13562/3 stops at Aveiro, Ovar, Gaia, Porto-Campanhã and more militants come in every season.

More and more passengers are arriving at the bar and there is soon a queue for coffee. A group from Porto spreads a large farnel consisting of bola, cod and salmon sandwiches on the tables. And jumps out of a bottle and an espadal wine (rosé of green wine). "I bought it in the tavern of Badalhoca, right there in Boavista.It is for whoever you want.We are all comrades!", Says an enthusiastic militant, who insists on publishing "the espadrada of Santo Tirso, what a miracle. "

In the first class carriage (the only train because it is the same as the bar), the atmosphere is calmer. From time to time arrives a group of passengers, who crosses the composition from beginning to end, there and stops. "Look, the train ends here, there is the chauffeur's carriage, we can no longer follow," says a lady, pointing out that her tour ends there.

Discreetly sitting in front of a laptop, the Minister of Education, João Costa, travels. He is the only ruler on board. Deputies, present Idália Serrão and Maria da Luz Rosinha. He travels in the bar, busy, standing, by the window and does not hide that he is happy with the landscape of the High Minho. "I am a regular train user, and every day I go from Vila Franca de Xira to Oriente and then to Entrecampos, and yesterday I came by train from Lagos to Lisbon."

The deputy recognizes that the CP suburban service has already worked better and was more punctual. "Now there are some delays, the part of the row from the north to Azambuja is very used, and if one of the compositions fails, it slows down the other trains, but I think we'll overcome these problems and we'll bet this. will win on the railroad. "And he adds:" That is decisive for the future of the country. "

And how did this train, compiled by the PS, pay 13 thousand euros to move from Pinhal Novo to Caminha and back? There are six coaches named Corail, manufactured in the then Sorefame, in Amadora, but from technology and French patent. They are five of the 2nd class and one of the 1st class with bar. The locomotive that draws this is clearly German. Marked by Siemens.

However, the traction changes in Contumil. The electric locomotive is replaced by an old British diesel engine with a van with a generator. Because the Minho line has not yet been electrified (the works that have to be completed by the end of the year), the electrical energy for lighting and air conditioning is provided by the vehicle, which determines the welfare of the passengers.

The PS train is not late. And apparently this does not harm the life of other circulations. It is certain that in Pombal there was a regional train for Coimbra who had to lean to a shelter to be surpassed by the special. But it was only a few minutes. The proof that this service is not even the subject of a special treatment by the CP is now seen in Barcelos, where the 600 socialists (now the train is full) wait 10 minutes to cross with another train. It is that the line is only track and crossroads can only be made at the stations.

Until it looks like a convoy of goods in the opposite direction. Which priority has apparently been given. The least conspiracy theory! – that the powerful Mota Engil has put a wedge to ask for privileges because the wood laden train from his company is Takargo.


From now on the line is often close to the coast and you can see the sea and the beaches of the Alto Minho, landscapes that do not leave passengers indifferent and which cause them to hurry to photograph through the window. Earlier in Porto, when crossing the Douro, there was an excitement among the passengers through the view of the Invicta from the bridge of S. João. There are basic militants who, let them admit, have rarely traveled by train and this journey – on the faces – has a certain taste for adventure.

Whoever is angry is a militant of a part of Lisbon that did not want to give the name. In the East he noticed that there were some penetrations. "I know them, they are from the right, they are fascists, they can come in. No one controls this," she said indignantly.

A rarity on the Minho line, the train passes Viana de Castelo without stopping, and shortly afterwards, after winning a winding route, he enters a tunnel and begins to loosen up as soon as it becomes possible to see the daylight. see, slowly glide through the Caminha station, just as the clock falls for 15 hours and 43 minutes. To the table.