How many places are registered in Portugal? – ECO

Almost 80 per day. In this period new local lodges are registered in Portugal, but this has not always been the case. Temporary rent of houses to tourists has been around for decades, but it was only from 2014, when a new regime came into effect that regulated this activity, that the phenomenon became more important. Nowadays, the local accommodation accounts for a significant proportion of the number of tourists. In areas such as Lisbon, Porto and the Algarve there are parishes where more than a quarter of the houses are used for tourists.

The numbers are: before 2014, the year in which the new law came into force, was registered in Portugal more than 10,000 local accommodation – which does not mean that these units only existed, since the parallel economy, with different non-registered units, was common in this sector.


Since then the records have been shot up. Four thousand residential units were registered in 2014; more than 10,000 in 2015; 11 thousand in 2016; 19 thousand in 2017; and, this year there have been 18,625 accommodations so far. This means that an average of 79 local households per day were registered in the course of this year, more than last year, when an average of 52 registrations per day were made.

There are major differences at regional level. Together, the districts of Faro, Lisbon and Porto represent almost 80% of all local housing in the country. The Algarve stands out, with more than 29 thousand registrations, followed by Lisbon, which has nearly 20 thousand, and Porto, with more than eight thousand. 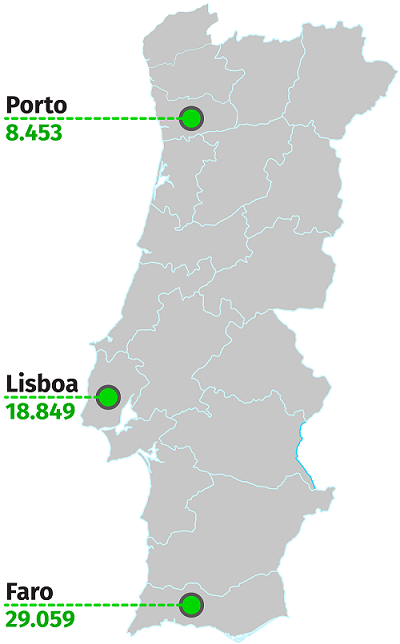 The changes to the local housing law, recently approved and already published in the Diário da República, can counter this growth rate. This is because one of the changes that provides locally define demarcation areas within municipalities, in which they may be solved maximum quota for the granting of permits for the exploitation of local accommodation.

For now, however, the effect is exactly the opposite. Because it is not yet certain what the containment areas will be determined by the rooms, the number of new registrations has skyrocketed in the zones where this activity has gained more expression. Since the new law was adopted on 21 July and until now in Parliament, more than 900 new local houses have been registered in the municipality of Lisbon alone, one of the largest in the country. In the same period last year, there were just over 400 homes in this area.

How much does it cost to produce a Berlin ball? Do the Portuguese do a lot of beer? How much does a Uber driver make? And a board chair? To whom does Portugal owe more money? 31 days and 31 questions. During the summer the ECO prepared the "Did you know that …", a daily section to give 31 answers.