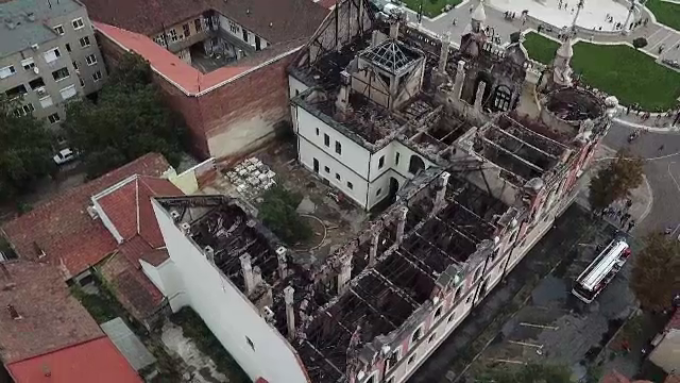 The huge fire that broke out in the historic center of Oradea on Saturday evening and destroyed the Palace of the Greek-Catholic Episcopate is now being analyzed by firefighters.

Witnesses believe that it may have been caused by a short circuit, especially since before the break, some lights were noticed on the facade of the palace that quickly went out. More than a hundred firefighters managed to stop the flames after three hours. They are not victims, but the patrimony building is badly damaged.

In the middle of the night tongues of fire burst through the roof of the palace of the Greek-Catholic episcopate. They quickly swallow the attic and the first floor.

In the unchained hell one of the towers of the palace collapsed into the street. Images made with a bang show the extent of the disaster.

Traffic in the area was stopped and several restaurants and cafes were evacuated. Passersby helped the firefighters to move the cars parked in the neighborhood.

Gigantic fire in one of the monumental buildings of Oradea. A tower collapsed

witness"I saw fire on this tower and when the wind was running away. The roof was effectively melted, the roof was made of copper."

Corina Caragea, presenter of Sports News, saw in the area how the fire broke out:

Corina Caragea: "I took a picture when I saw a flame and everything changed into a nightmare, the firefighters seemed to be confronted, they were struggling with windmills."

Some fire hydrants in the area did not work, and the firefighters were feeding their cars from the Crişul Repede River.

witness"Let's go to the other side, that the fire is on that side, behind it."

witness: "Beware, they came to the first floor."

More than 15 hours of answers are sought for the location. Firefighters and forensic police officers want to find clues that will lead to the causes that caused this unfortunate event.

Several flashing lights were filmed by a witness on the front of the palace before the fire broke out, so many think of a possible short circuit.

Florin Birta, deputy mayor of Oradea: "It is not normal to work that way, but the police investigation will probably determine whether that was the cause or the other."

Ioan Mihaiu, Prefect of Bihor County: "It is possible a short circuit It was a 112 reference with a problem on a street lighting pillar on the side of the building, there was a problem with Electric's team, but we think it's short-circuited."

The palace of the Greek-Catholic episcopate was built a hundred years ago. In 1948 the Communists turned it into school and then became the headquarters of the County Library. After 1992, the palace was returned to the owners who only renovated the façade.

Anton Cioaba, rector of the Greek-Catholic seminar Oradea"There was no one in the building, it was not used." In the courtyard there is a house where a priest lives, but it happened on time and nothing happened. I know if they are estimated. & # 39;

The city hall of Oradea starts a fundraising campaign to restore the building as quickly as possible. 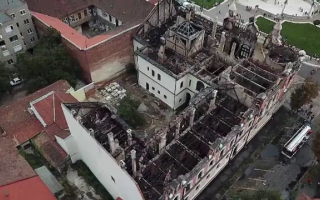