Klaus Iohannis convened the CSAT on budgeting on 4 September 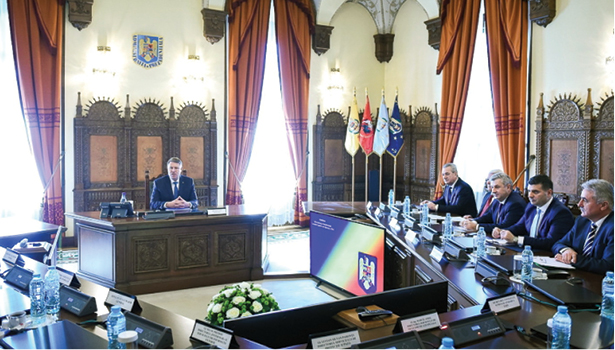 President Klaus Iohannis has decided to convene the CSAT before 4 September 13:00, on the agenda of an analysis of the proposals for the rectification of the state budget of the institutions with responsibilities in the field of national security for 2018, according to Mediafax.
"The secretariat of the Supreme Council for the Defense of the country has initiated the procedures for the adoption of a Council decision on the rectification of the State budget of the institutions which have responsibilities in the field of national security for the year 2018. the individual assent of the members of the Board and the notification to the Ministry of Public Finance on August 21, According to article 6 par. (3) of the Act No. 415/2002 on the organization and functioning of the Supreme Court of National Defense, for the issuance of a Council decision, requires the consensus of its members, since not all members of the Council agreed to the adoption of the rectification proposals, the President of Romania, Klaus Iohannis, decided to request the Supreme Defense Council. to call the country for Tuesday, 4 September, 13:00, on the agenda the analysis of the proposals for the state budget of the institutions national security for the year 2018 "reads a press release issued by MEDIAFAX.
The presidential administration has stated that the CSAT secretariat has complied with the working procedures of the Council, drawn up by laws and regulations concerning organization and functioning.
On Tuesday evening, the government sent the Romanian President the request to convene the CSAT meeting as soon as possible to analyze and approve the proposals for the correction of the budgets of the institutions with responsibility in the field of national security.
Prime Minister Viorica Dăncilă said on Thursday that the government called for an emergency call for the CSAT to adopt the rectification of the budget, because President Klaus Iohannis "did not find the opening or perhaps had no time" to do so.
"Budgeting is one of the most important projects of the government, which should have been approved during today's session (Thursday – Friday) Unfortunately, the President of Romania did not find the opening or maybe he did not have the time to visit the Supreme Defense Council of the country to analyze and confirm the first rectification of the budget this year, although the draft is already in the public debate on August 6. Viorica Dăncilă said at the beginning of the Executive meeting.