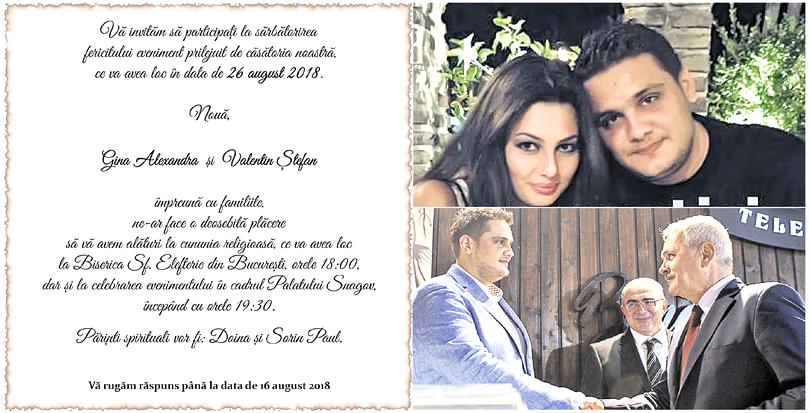 The young millionaire Valentin Dragnea (29) will join her fate on Sunday with Gina Alexandra, the girl she has loved for more than five years.

The young woman is very discreet. On the internet you can still find photo's of her from 2009 when she came to the finale of the beauty contest Miss Universe Romania, where she was the 20th. In the competition description, the young woman said she wanted to become a journalist and she is passionate about photography and driving.

The two are religious on 26 August and then go to the Snagov Palace together with guests. The spiritual fathers of the two are, according to the invitation, Paul Sorin and Doina. The location was not accidental. Snagov Palace was the host of famous weddings, including the daughter Elena Basescu of Traian Basescu.

Wedding ceremony at the Snagov Palace, the place chosen by dignitaries for such events 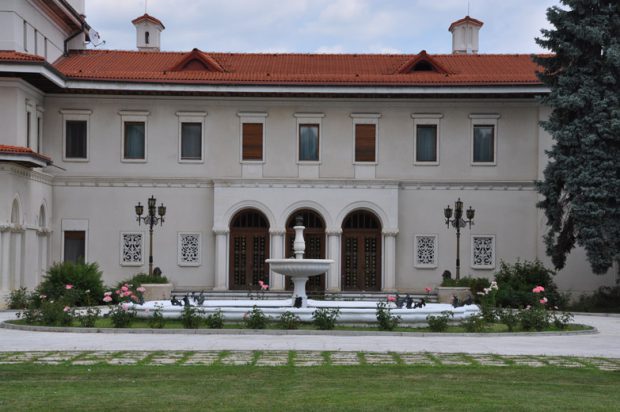 The religious ceremony takes place at 17:30 on Sunday in the church of Saint Elefterie in Bucharest, and the party starts at 19:30 in the Snagov Palace. The invitation was printed long before the event and distributed to friends of the Dragnea family. All "heavyweights" from PSD, as well as many important business people from the area around Liviu Dragnea, have received it.

The event, which according to the number of guests a big will, takes place in the Snagov Palace. Former royal palace, built in the 1930s, for Prince Nicholas of Romania, on the shore of Lake Snagov, the Snagov Palace is now one of the favorite places for the "good world" for important events.

Prices are: rent of the two large rooms costs more than 5,000 euros, and the front garden, another 3,000 euros.

According to the information provided by family members, the marriage of Dragnea junior is reserved for both the interior and the exterior in order to avoid overlapping with other marriages or to prevent potential intruders, journalists or paparazzi from approaching.

What is on the wedding menu in the Snagov Palace 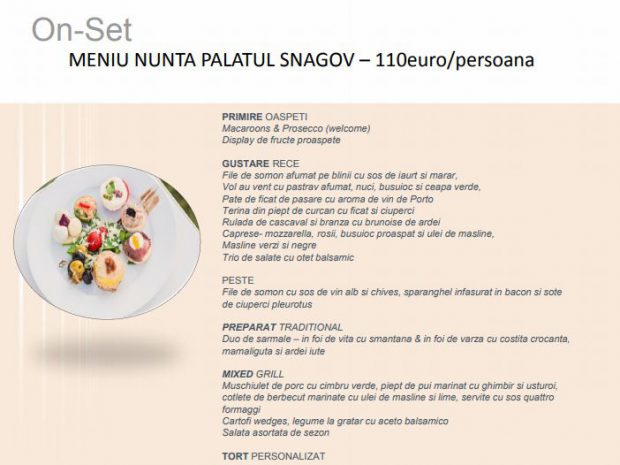 As far as the menu is concerned, the "standard" at Snagov Palace costs 110 euros per person, but it can of course be changed, improved and developed.

Cold snack
Salmon fillet of smoked salmon with yoghurt and dill sauce
They have an air grill with smoked trout, nuts, basil and green onions
Pork liver with aroma of Porto wine
Turkey turkey breast with liver and mushrooms
Roll of cheese and cheese with peppers & # 39; s

Who is Valentin Stefan Dragnea: Son of Liviu Dragnea, a young millionaire in the pig sector

Valentin Stephen Dragnea, son of Liviu Dragnea, is a millionaire before he was 30 years old. He has a pig company with luxury shoes, has a restaurant, numerous cars and is planning to enter the real estate market to increase his income.

He and the rainforest Gina Alexandra have been together for more than 5 years.

At the beginning of the year, Rise Project wrote that Liviu Dragnea & # 39; s son, Stefan Valentin, took over the luxury of Tel Drum. Journalists said the operation began last month before the company claims bankruptcy before the court.

Recently the son of Liviu Dragnea bought a new car when leasing. Valentin Dragnea leads the BMW M760Li, which costs more than 150,000 euros.

Newsweek Romania wrote that the son of Liviu Dragnea, Valentin Dragnea, bought his car on July 4, the day of the United States of America. The 609 hp was also bought in leasing.

These are four properties that together form a total area of ​​3.9 ha at the entrance of Turnu Magurele. The amount with which the son of Liviu Dragnea bought the four buildings: 106,000 euros.

The transaction took place on January 9, that is, before Tel Drum asked for insolvency. The official buyer: a company (Zooveg 2010) where the 29-year-old son of the PSD president holds 70% of the shares.

Who are the wedding bride: businessman Sorin Paul Stănescu has been a friend of Liviu Dragnea for 30 years

Less than 10 days before the wedding of the son of Liviu Dragnea, businessman Sorin Paul Stanescu said that he accepted to be the wedding bride of Valentin Dragnea without taking into account "the political position or public activity of one of those 4 parents of the future couple. "Stanescu also said that he has had a friendly relationship with the Liviu Dragnea family for almost 30 years.

Stănescu, who has done business with Geronimo Brănescu, the head of ANSVSA, said that the group of companies he runs had no business relations with the Dragnea family, and the business share with the Romanian state does not exceed 2 percent.

Liviu Dragnea & # 39; s son settled in a parish house in Bucharest, just behind the Church of St. Elefterie, Newsweek Romania wrote. The drawing of Valentin Dragnea in space was made with the will of the Romanian Orthodox Church, the quoted brons.

Journalists from Newsweek Romania show that although he does not live in that parish house, Valentin Dragnea has registered his place of residence there. That is why the parish house would appear in the trade register and in the official journal with every action concerning the SRL and SA & # 39; s in which Valentin Dragnea is involved.

The Archdiocese of Bucharest has made further clarifications in this case. "CSo the parochial is the future father-in-law of Valentin Dragnea and the clearing of space took place before the wedding on 26 August in the Snagov Palace and was done with the approval of the Romanian Orthodox Church. The parochial houses are mainly used by the priest priests of the respective parishes and their families (according to the Statute for the organization and operation of the Romanian Orthodox Church, Article 48, paragraph 1). The priest Dionis Tătulescu, cleric of the Saint Elefterie – New parish, with the approval of the mentioned parish and of the Eparchial Center of the Archdiocese of Bucharest, lives in the parish house of Dr. Mihail Obedenaru Gheorghiade Street, nr. 1, together with his family (wife and two daughters). One of the daughter of Dionis Tătulescu will marry Mr. Valentin Dragnea in August 2018. Without asking for the approval of the Parish of Saint Euthypheus – New and without informing the Eparchial Center, priest Dionis Tătulescu took the legal steps so that his future son-in-law, Mr. Valentin Dragnea, settled in the parish house on the mentioned address, with the aim of: starting his civil wedding in Bucharest. We mention that there is no trading company active in the parish house of St. Euphemia – new parish, since the house is not the headquarters of a commercial company. In short, there is no justification for any accusations by the Romanian Orthodox Church regarding the current address of Mr. Valentin Dragnea ", writes in the communiqué of the Romanian Patriarchate.