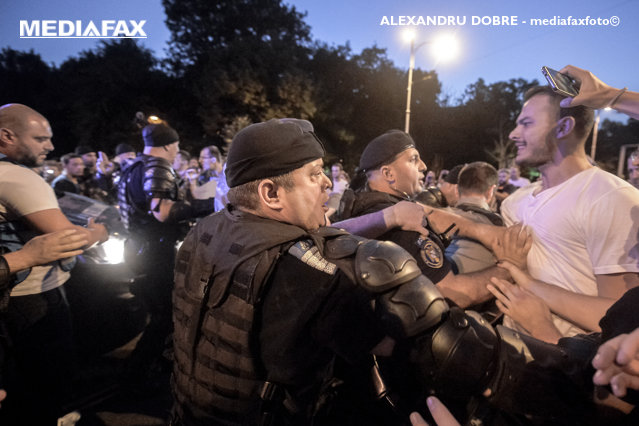 The Interior Minister presented the film of violence that took place on August 10 in Victoria Square in the capital. The first violent events were recorded around 1600 hours and after violence interventions the order was restored around 01:00 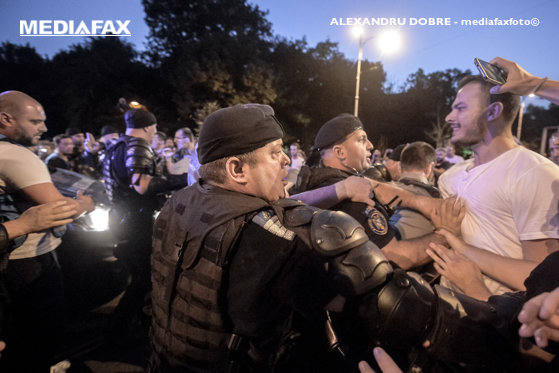 Carmen Dan presented the chronology of the events of 10 August in Victoria Square, starting at 1.55 p.m., when a command point was operational at the yard of the government. The film of violence was briefly presented and the data is part of the Operational Action Report and Journal

. "Time 13.55 – the commissioning of the command point at Victoriei Square, at which time there were two limited groups of demonstrators – one at University Square and another at Victory Square. gendarmes with a short-sleeved service, headphones and protective material, it was not intended to intimidate or attack the Gendarmerie, "said Minister Carmen Dan.

One of the conclusions of the report is that the practice of violence against law enforcement has been new, as a result of a change in the action plan. Thus aggression is manifested individually or in organized groups along the entire apparatus with increased mobility, both in the contact area and within the mass of participants in lines 2 and 3.

"This way of acting enabled the aggressors to be the first to use rows of demonstrators as a real human shield and the peaceful demonstrators were reluctant to distance themselves from the aggressive elements, so the mission of isolation and abduction of violent persons was made difficult Although this was impossible to achieve, this kind of action made people were peaceful and willing to bear the consequences of the actions of law enforcement officers in an attempt to reject the violent through the use of irritant-lacrimogenic gases, violence against the Gendarmerie, but also the violent actions that took place in the area behind the first row of demonstrators There were people who indicated people who had the pavement and st Covered edges in the area to throw bits of them to the police, "said Carmen Dan.

20:00 – the commander of the action tells the prefect the situation, informs him about the necessity of a (19659005) At 21.30 a group of violent people is formed in the area of ​​Iancu de Hunedoara Boulevard, known as part of the football galleries. It was commissioned to set up a device to isolate the group of violent supporters, but because of those who were not delineated by the aggressive people, the action did not succeed. Apart from the violence at the level of the gendarmerie, vandalizing actions in various parts of the market, such as the destruction of street furniture in the museum area and Antipa During the period between 9 pm and 10 pm – according to Act 60 of 1991 repeated warnings were given. and subpoenas performed by means of sound reinforcement. According to the log of the operation, the last summons was done at 22 and 2 minutes, giving the demonstrators enough time to leave the square.

Read: The Minister of the Interior presents a report on the rally on 10 August: 21 criminal cases opened, 3 with unknown author / Inside MAI, internal verification: 5 cases were found of committing from ABUZURI / Carmen Then the services fall to

"I will present a moment in detail important since that evening, because it is decisive for the decision to intervene to restore public order: at 22.53 112 coordinators signaled that a group people are violent in the fast-food area of ​​Calea Buzeşti DGJMB calls for police intervention because they are not currently, the possibility to reach the area in question In the first phase, 2 crews of the Spec Actions Service later in the support of the Two other crews Around 23.01 hours the crews reported that there is no violence or vandalism in the area, and therefore they are ordered to withdraw. between crews are blocked by the crowd of people around the car & # 39; s and therefore the support of the Gendarmerie is requested. In the dynamics of this situation, three other police officers who are confined to the same area in the Victoria Passage. At the request of the police, two gendarmes detachments are led from the Victoria Palace to the police stations that are blocked in the fast food area. This is the moment when the two gendarmes – a man and a woman – are isolated from the rest of the detachments and are attacked because they have been stolen from one of them, "said the minister of internal affairs [23-39] 23.11 – the commander of the action recommends the intervention for the restoration of the order The report describes the arguments behind the order, in particular the need to reduce the risks for the life and integrity of the attendees in the area, both demonstrators and gendarmes

"During the restoration of public order, there have been violent interactions between law enforcement agencies and aggressors, situations in which people who have not exercised violence but have not left the market suffer, but also acts of street furniture destroy, "Carmen Dan said.

The content from the website www.mediafax.ro is exclusively for your personal information and use. It is forbidden to republish the contents of this site without the permission of MEDIAFAX. Please contact us for this agreement via [email protected]