The protest on the Victory Square would have become a victim! "He vomited blood and mouth and nose" 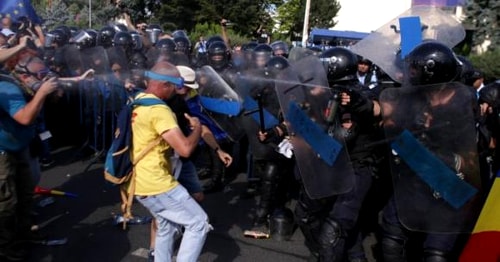 A man died only a week after he was present the protest of the Diaspora on the Victoriei square! Witnesses say that he had serious problems immediately after the gendarmes had used tear gas on the market!

A 62-year-old man from Turnu Magurele, Teleorman County, died a week after attending the Victory Square protest. A close friend of the deceased lieutenant claims that after protesters were attacked with tear gas, Ilie Gazea had given blood. The police in Teleorman have submitted a presumed death record in this case.

Read and Nora Dinca, the victim of gas on Victoriei Square! "Criminal psychopaths are established heads"

Read and The effects of tear gas on health! A specialist explains what can happen to you if you have inhaled them

The protester died a week after the protest at Victory Square

Police officers in Teleorman were informed by representatives of the Alexandria Hospital about the death of a 62-year-old man who felt bad after the protest of 10 August in the capital, and opened a criminal case.

Teleorman County Police Inspectorate spokeswoman Teodora Dragole said police officers were being interviewed by Alexandria hospital about the death of a 62-year-old man. The researchers ordered a necropsy to determine the cause of death.

"A 62-year-old man from Turnu Magurele would have died in the night of August 19 to 20. This morning (Monday: Monday) our colleagues opened a criminal case, Necropsie was given the assignment to determine the cause of death. carried out under the coordination of a public prosecutor at the public prosecutor's office attached to the Alexandria Court "said the police representative. The medical director of the Alexandria Hospital, Valentina Roibu, told MEDIAFAX that the medical department had requested an investigation to prevent any suspicion.

"We asked the Forensic Medicine Service and the police to raise any suspicion, to see what it was, we had no demands from our colleagues and our colleagues had not told us anything"said the representative of the hospital.

She added that the patient's condition was deteriorating. "The patient presented himself at the emergency department of the Turnu Magurele hospital, from there, with vomiting, bleeding, hematemesis, was sent to our hospital, he was admitted to the intensive care unit, where he received the best treatment, respecting the protocol On the 19th, he had a cardio-respiratory arrest that did not respond to resuscitation maneuvers and died, and the patient was in a rather critical condition. "said Valentina Roibu.

Representatives of the Romanian gendarmerie held a press conference on Saturday 11 August about the violent events during the diaspora protest.

"I would like to thank the public, thanks to those protesters who have protected the reports gendarmes Violence has had serious consequences 452 medical assistants, 72 hospitals, including 11 gendarmes I told you on Thursday that there are reports that encourage hatred and intolerance and The Romanian gendarmerie adapted the device to be able to intervene proportionately and gradually.

The devices tonight were extremely defensive, there were actions when the law enforcement services were attacked. Most televisions have overwhelmed images with those people who tried to enter the government headquarters. It is clear that blocking traffic when the number of demonstrators was not high, followed by the attempt to break the gendarmerie cable, was a premeditated action (…). According to the legal provisions, the prefect approves the intervention in force. Last night I received my approval on 23.11. From that time until 2.08, measures have been taken to evacuate the area. The gendarmes in the device were hit with stones and other "said the gendarmerie.

The protest on the Victory Square would have become a victim! "He vomited blood and mouth and nose"