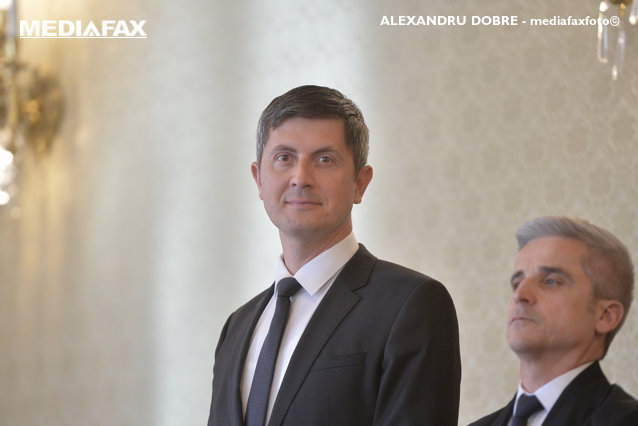 US President Dan Barna urged Interior Minister Carmen Dan to resign for attempting to hide the violent events of August 10 & # 39; by a & # 39; pseudoreport & # 39; to propose. "There is political responsibility for the action by August 10th you, Carmen Dan! Carmen Dan is just a pathetic propagandist of Liviu Dragnea, not the Romanian Minister of Home Affairs Carmen Dan remembers and despises the Romanians in a pseudo-portrait the responsibility of the Disguising Gendarmerie because he breathes peaceful protesters and cheers and does not remove violent persons It is unacceptable to blame what happened to the peaceful protesters, to accuse the victims of repression! ", Wrote USR leader Dan Barna on Facebook on Facebook

According to him, Carmen Dan had a "moment of sincerity when he said the law was not for everyone eldt. "

" Carmen Dan has tried to find manipulations of the FB, but has not criticized the lies and manipulations that the Romanian gendarmerie ever circulated in the night of 10 August and the press criticized? For once the lie is said or adopted, is the lie true? Carmen Dan had a moment of sincerity when he said that the law does not apply to all, gendarmes and demonstrators. I also note that the fiction that Carmen Dan presented as a report, the deviation from PSD does not reveal that the government was prepared to be removed, but the time for new manipulations is not over yet. One thing I add after the horrible performance of Carmen Dan: resignation! ", Added Barna.

The Interior Minister announced on Sunday that after the violence of the demonstration on August 10, 21 files were opened of which three were arrested and two were under judicial control.

Read : The Minister of the Interior presents a report on the August 10 rally: 21 criminal files opened, 3 with unknown author / Inside MAI, internal verification: there were 5 cases found of the commission of ABUZURI / Carmen Then falls the services to

"Today I was presented to you the report on the events of 10 August, which I have asked all ministries. I want to be very clear right from the start, this report does not have the role to settle the debt. We are not a court of law. I begin by offering my apologies to all who have suffered, civilians or military gendarmes. I do not hesitate to submit this report to the defense committees in Parliament or the CSAT. If these days were convened by the Defense Committee of the Chamber of Deputies, I tell you that I have not received any invitation so far, but I am ready to take part, "said Carmen Dan, Minister of the Interior

There have been no less than 21 criminal cases to date

"There are 21 criminal cases opened. Twenty people have been examined. Three were arrested and two were placed under judicial supervision. The police and the gendarmerie assure you that they have worked all those days to identify violent people, but they only had two days to go. Monday we go to the prosecutor's office with other information and data that we get today. It's about two terabytes of filming, "he added.

He also announced that an internal check was being carried out at the level of the ministry, which considered 5 acts of misconduct against people who did not. Then it has announced that all obtained data will be forwarded to the public prosecutor's office.

The content of the website www.mediafax.ro is for informational purposes only and for personal use it is forbidden to republish the contents of this site without the permission of MEDIAFAX.To obtain this agreement, please contact us at [email protected]