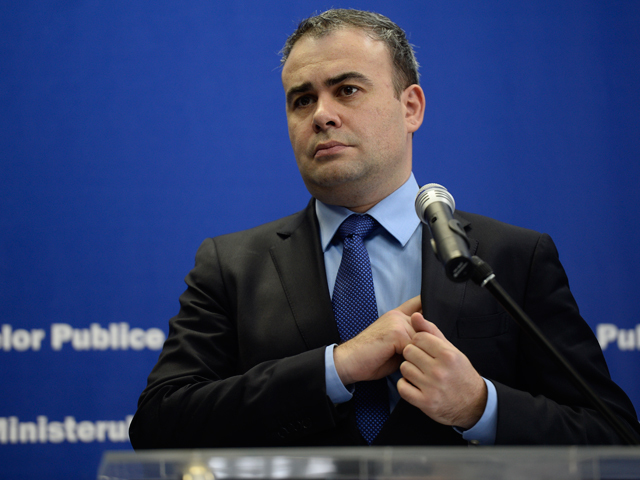 Premier Advisor Darius Vâlcov insinuated on Facebook that President Klaus Iohannis had an agreement with OMV director Rainer Seele about the offshore law, in January the head of state discussed him "in private", and in August Iohannis rejected the normative act [19659002] The image of the article Vâlcov accuses Iohannis of having agreements with the CEO of OMV on offshore legislation ” id=”main_picture” src=”http://storage0.dms.mpinteractiv.ro/media/1/1/1687/17446375/1/darius-valcov-mad.jpg?width=560″ />

Válcov added that the same month the Austrian television channel ORF reproached the Gendarmerie in the protests of 10 August.

"In January 2018, Mr. Seele (Rainer Seele), the CEO of OMV and Mr. Werner, discussed in July the parliament adopts the offshore law, with a small change of 6 billion dollars on top of the Romanian state, and in August, Mr. Werner rejects the offshore law August, the Austrian national TV station ORF is suddenly interested in Romania and accuses reprisals of the Romanian gendarmerie We will see the sequel! But this time I assure you that the Romanian state will demand what it is, Postscript Seele and Putin, two good friends, "wrote Darius Vâlcov on Facebook Sunday night.

The advisor to Prime Minister Viorica Dăncilă said Saturday that the law at sea adds $ 6 billion to the state budget. anyone who would try to change the current form would have to be tried for treason, and he said that before the offshore legislation was upgraded, the big companies had a profit of more than $ 900 million in two years and the Romanian state less than 100 million received

On 2 August, President Klaus Iohannis reiterated on Thursday parliament the law regulating the Black Sea gas exploitation measures. The head of state claims that such a topic is of great importance to Romania and such a law must strike a balance and fairness reach in terms of benefits for both the Romanian state and investors. Iohannis criticizes the lack of predictability and stability of the offshore legislation in the form sent to promulgation.

Iohannis argues that the ways in which royalty income becomes an income to the state budget are not clearly regulated, as the current legal form does not transfer the revenues to public-private partnership contracts to the consolidated budget. The head of state also claims that the offshore law was passed by the legislator without respecting the principle of the bicameral system.

On July 24, PSD president Liviu Dragnea declared that the law on the exploitation of gas in the Black Sea should be very clearly regulated, Government ordinance, within the meaning of a provision containing a calculation formula "for deductions for additional income tax."

On 11 August, the Austrian public post ORF sent a protest note after some journalists were attacked by law enforcement agents during the rally held on 10 August in Bucharest. "During confrontations between police forces and violent demonstrators, a cameraman from the ORF was beaten and ORF correspondent Ernst Gelegs barely escaped the success of a law enforcement agent who had shield …", he transferred the Austrian post

On the same day, the Austrian Chancellor Sebastian Kurz condemned the violence in Bucharest and awaited clarification of After the Austrian journalists were attacked by police during protests last Friday [19659005] seized Gendarmes powerfully on 10 August with tear gas and water cannons on Victoria Square for anti-PSD stands for the headquarters of the executive. More than 450 people, including 35 gendarmes, received medical care from SMURD crews on Friday in protest at Victoriei Square. Of these, 40 were taken to the hospital with various traumas, three with burns to 15% of the surface of the body.

About 1,000 gendarmes participated in the August 10 protest at Victoriei Square, reports Laurentiu Cazan, the one who ordered the intervention of the police at the demonstration and claimed that reinforcements were also taken from other regions of the country asked. At the Bucharest Military Prosecutor were registered up to 291 complaints against the gendarmes who have intervened in the protest of August 10, representatives of the Office of the Public Prosecutor declared for MEDIAFAX. Military prosecutors have heard 127 people so far

If you liked the article, MEDIAFAX follows. RO on FACEBOOK »

The content of the www.mediafax.ro website is for your personal information and use only. It is forbidden to republish the contents of this site without the permission of MEDIAFAX. Please contact us for this agreement via [email protected]