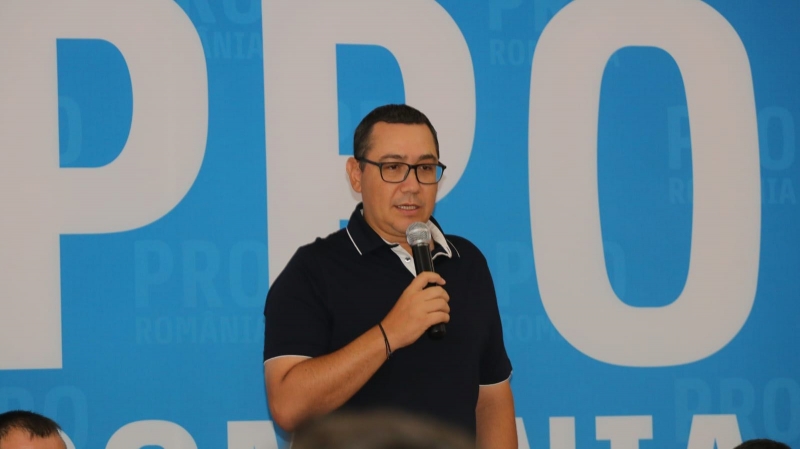 Former Prime Minister Victor Ponta said Thursday in Constanţa that the offshore law stipulates that Romania will not remove cubic meters of gas and will not charge compensation, due to a "group of criminals" who has the power and who wanted to use the theme of natural resources of the country to "take photos of Donald Trump and take part in the opening of the embassy in Jerusalem."

Victor Ponta said Thursday in a press conference that despite the introduction of the Offshore Act in Romania no investment will be made.

"After all the circus and the unprecedented situation I've experienced in recent months, namely that the government is proposing a law, the senate approves that law with the PSD-ALDE vote, the chamber of representatives in the committee approves that law. One hour before the vote, Mr. Dragnea comes and the law changes completely with something that nobody understands and after that Mr. Dragnea comes in and says the law is not right and needs an emergency order, I'll tell you the conclusion. invested in Romania, no cubic meters of gas are removed, no levy is levied and we import gas from Russia, this is the end and conclusion and result of a group of criminals who have the power in Romania and who have this theme of the Romania's natural resources wanted to use Trump's photo 's and take part in the opening of the embassy in Jerusalem, Ponta.

Asked about what criminals are, the former prime minister replied: "Political and economic criminals".

He claims that the issue of energy independence, built by various governments, has been destroyed "in strict negotiations about a physical person."

"All this theme that has been built for years by several governments in Romania, and not just the government that I led, namely Romania's ability to be energetically independent and invest billions, has been destroyed, in strict negotiation about the person who failed. If we are today, with the current law and the regulation that the government must give to repair the law that Mr. Dragnea presented one hour before the vote (…), then the result is: it is not doing any investment, not even a dollar in the Black Sea, although up to now one and a half billion investments have been made, we will not even collect a leu fee because the royalties are collected when you start to get gas, "Ponta explains.

He said the gas price is rising, and when our country needs gas, it will take them from Russia.

"I can not say that it was a conspiracy to say who the winner is, Mr. Dragnea did not win if you asked me if he gave a signal of a stateless state," Ponta decided.

The Offshore Act, which regulates the exploitation of gas from the Black Sea, was approved by the Chamber of Deputies on July 9 with 175 votes in favor, 30 against and 30 abstentions. USR, PNL and PMP did not vote.

PSD leader Liviu Dragnea said that the law adopted by the Chamber of Deputies, in a form very different from that adopted by the Senate, will help Romania to no longer be energetically dependent on the Russians.

He then announced that the government would adopt an emergency regulation to "clarify" the offshore legislation because what the law says is not so well defined in the annex where the calculation formulas are included and that "the text must be very clear". and rigorously worded ", being a law of" enormous importance to Romania "."

I am interested in what has been decided politically as principles that have to be made very clear and rigorous in formulas and texts, "said the PSD president.