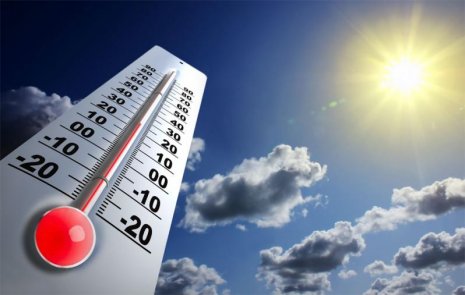 In the next two days it will cool down, so that on 28 August the average of the maximum temperatures in the region will be 27 degrees, and then there will only be minor variations around 28 degrees. The average thermal minimum is around 17 degrees in the first week and lower, about 14 to 15 degrees in the second. In Oltenia, during the first week, the day's thermal values ​​feature a warm weather, with an average of 32 degrees. In the second week it will cool down and the maximum temperatures are on average between 26 and 28 degrees. The daily minimums will have a similar evolution, until 27 August their average will be around 17 degrees, then it will only be 13 … 14 degrees.

Between 20 and 25 August the weather will be warmer than normal for this warm afternoon in the plains of the region and the regional average of the peaks is 30 … 31 degrees. Then, until August 28, the peaks will drop to 24 degrees, and at the end of the second week, the daily temperatures will rise slightly and reach an average of 25 … 26 degrees. Minimum temperatures will not vary
the first important week, with a regional average of 14 … 15 degrees. The average nighttime temperatures then drop to 28 degrees on 28 August. So until the end of the second week the variations will not be noticeable, with a regional average of about 11 degrees.
There will be sunshine every day, but especially between August 23 and August 28, when they will be in larger and more quantitative areas.

MARAMUREŞ
The weather will be warm in August 20-24, when the maximum temperatures will average around 32 degrees. From August 25 it is back in a cooling process that brings the average temperature on 27 and 28 August to 24 degrees. The thermal peaks will then gradually increase to an average of no more than 28 degrees. The average of the minimum temperatures is 15 … 16 degrees in the first week, and then decreases to averages around 10 degrees on 29 August. After this, the average night will be relatively constant, 11-12 degrees.
There will be showers every day, but more importantly, they will probably be on 26 and 27 August.

MOLDOVA
In the first week of the forecast, the day thermal values ​​have no significant variations and their average is around 31 degrees. In the first two days of the second week it will cool down again, so that on 28 August the average of the thermal peaks will be only 25 … 26 degrees. Subsequently, the temperatures will not change significantly until the end of the interval and their average temperature will not exceed 27 degrees. The evolution of thermal minima will be comparable, their average will be 17 … 18 degrees in the first half of the interval, on 27 and 28 August it will decrease by about 3 … 4 degrees, then it will not change significantly and it will be 13 … 14 degrees.
Atmospheric instability will generally be reduced. Exceptions will be made on August 26 and August 27, when the probability of large-scale obstructions in large areas will be large.

DOBROGEA
By 26 August, the average thermal peaks will vary between 29 and 31 degrees, the next two days will decrease by about 4 to 5 degrees, and then slightly increase, but most likely at the end of the prediction range, will not exceed 28 degrees. .

Banat
Until August 24, the weather is warm in the afternoon, with an average temperature of around 33 degrees. Over the next three days, the daily values ​​will gradually decrease, so on 27 August the average in the region is a maximum of 25-26 degrees. Then it comes again in a mild heating process, with the result that at the end of the regional average it will be 28 … 29 degrees. As regards the minimum temperatures, until August 26, the variations are insignificant, with a regional average of about 18 degrees. Then they drop to 12 degrees on 28 and 29 August, so that at the end of the interval the average temperatures slightly increase and reach 14 degrees.

Crişana
In the first week of the forecast period, the weather will be warm, with the regional average of the peaks around 33 degrees. Then the maximum temperatures will drop and they will reach 24 degrees on 27 August, and at the end of the second week they will grow slightly and reach 27 … 28 degrees on average.
On 26 August the nocturnal thermal values ​​will not fluctuate significantly around 16 degrees, and then decrease to 11 degrees, so that at the end of the interval average values ​​of 12 … 13 degrees.
The probability of the front will be higher between 22 August and 28 August and between 25 and 27 August they will be bigger. =
Until August 26, in the mountains, the thermal values ​​have no significant variations, the average of the peaks is 19 … 20 degrees and the minimums will be about 11 degrees. In the coming days there will be a cooling of about 4 … 5 degrees, then the maximum and minimum temperatures will not change significantly.

VIDEO / Two Romanians have studied in England, but have returned to the country with the application to pay bills for electricity, gas, telephony with one account