The European Parliament has adopted its resolution on the rule of law in Romania! What changes have they made

romania November 13, 2018 romania Comments Off on The European Parliament has adopted its resolution on the rule of law in Romania! What changes have they made

See the voting system below: 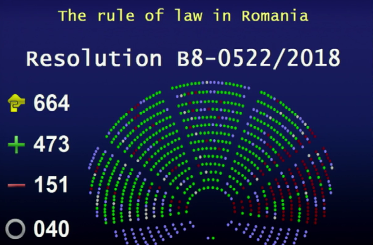 Several amendments have also been adopted in the original resolution.

Full text of the resolution without amendments:

– having regard to the Charter of Fundamental Rights of the European Union,

– having regard to the European Convention on Human Rights (ECHR),

– having regard to the Constitution of Romania,

– having regard to the Communication from the Commission of 11 March 2014 entitled 'A new EU framework for strengthening the rule of law' [COM(2014)0158],

– having regard to the debate on democracy and justice in Romania on 2 February 2017,

– having regard to the debate held on 7 February 2018 on threats to the rule of law through the reform of the administration of justice in Romania,

– having regard to the debate on the rule of law in Romania on 3 October 2018,

– having regard to the exchange of views of the Committee on Civil Liberties, Justice and Home Affairs of 1 October 2018 with the first Vice-President of the European Commission, Frans Timmermans,

– having regard to the hearing held in March 2017 by the Committee on Civil Liberties, Justice and Home Affairs on the situation of democracy and justice in Romania,

– having regard to the joint statement of 24 January 2018 from Commission President Jean-Claude Juncker and First Vice-President Frans Timmermans on the latest developments in Romania,

– having regard to the opinion of the Venice Commission of 16 March 2018 on Romania's draft law No 140/2017 concerning the amendment of the National Ordinance No. 26/2000 on associations and foundations,

– having regard to the Opinion of the Venice Commission of 20 October 2018 on the amendment of Romania's Law No 303/2004 on the status of judges and prosecutors, Law No 304/2004 on judicial organization and Law No 317/2004 about the High Council for Magistracy,

– having regard to the opinion of the Venice Commission of 20 October 2018 on the amendment of the Criminal Code and the Code of Criminal Procedure in Romania, which also includes Law No 78/2000 on the prevention, detection and punishment of corruption law and Law No 304/2004 on judicial organization,

– having regard to the ad-hoc report of 11 April 2018 on Romania prepared by the Council of Europe's Group of States against Corruption (GRECO),

– having regard to the Commission report of 15 November 2017, drawn up within the framework of the Cooperation and Verification Mechanism by Romania,

– having regard to the adoption by Romania's parliament in December 2017 of three laws on the reform of the judiciary, namely Law No 303/2004 on the status of judges and prosecutors, Law 304/2004 on judicial organization and law No. 317/2004 on the High Council for Magistracy; with a view to the adoption of amendments to the Criminal Code in June 2018 and the Code of Criminal Procedure in July 2018,

– having regard to the massive protests that have been repeated since January 2017 against corruption and the rule of law, including the massive "Home Diaspora" protest in Bucharest on 10 August 2018, resulting in the hundreds of wounded who were required medical treatment following violent police interventions;

A. whereas the European Union is founded on values ​​such as respect for human dignity, freedom, democracy, equality, the rule of law and human rights, including the rights of persons belonging to minorities, and whereas in a society these values ​​are common to the Member States in which pluralism, non-discrimination, tolerance, justice, solidarity and equality between women and men predominate (Article 2 of the TEU);

B. whereas Article 6 (3) TEU confirms that fundamental rights, as guaranteed by the ECHR and arising from the constitutional traditions common to the Member States, are general principles of Union law,

C. whereas the EU works on the basis of the presumption of mutual trust that Member States respect democracy, the rule of law and fundamental rights enshrined in the ECHR and the Charter of Fundamental Rights,

D. whereas the independence of the judiciary is enshrined in Article 47 of the Charter of Fundamental Rights and Article 6 ECHR and is an essential condition for the democratic principle of the separation of powers,

E. whereas the Group of States against Corruption of the Council of Europe (GRECO) in its April 2008 report on Romania expressed serious concerns about certain aspects of the legislation on the status of judges and prosecutors, the judicial system and the Superior Council of the Magistracy, adopted by the Parliament of Romania, as well as the drafts for the amendment of criminal law; whereas GRECO has questioned the legislative process, is concerned about the independence of the judiciary and suggests that there has been an implicit violation of anti-corruption standards;

F. whereas in its Opinion No 924/2018 of 20 October 2018, which confines itself to "some aspects of the projects, particularly controversial", the Venice Commission concluded that "although some improvements were welcomed as a result of criticism and various decisions of the Constitutional Court, (…) the three draft laws contain important issues that (…) can lead to pressure on judges and prosecutors and ultimately the independence of the system can undermine the judiciary and its members, and together the early retirement mechanism could undermine their efficiency and quality, which could have a negative impact on the fight against corruption, "as these issues" can undermine the public's confidence in the judiciary "(1);

G. whereas in its Opinion No 930/2018 of 20 October 2018, the Venice Commission noted that "it is necessary and appropriate for the Romanian Parliament to implement a reform of the criminal law to implement the decisions of the Constitutional Court and the EU directives in this area "and that many of the amendments" will seriously affect the effectiveness of the criminal justice system in Romania in combating various forms of crime, including crimes related to corruption, violent crimes and organized crime "(2);

H. whereas in its Opinion No 914/2018 of 16 March 2018, the Venice Commission welcomed the fact that 'the promoters of the draft law at the Bucharest meetings expressed their willingness to change the bill at different points', and the authorities in Romania consider the main recommendations, namely that "the new reporting and disclosure requirements of the draft law, including the suspension of activities and dissolution in case of non-compliance, are clearly redundant and disproportionate and should be abolished" And that the publication of detailed financial reports every six months and the indication of income sources, regardless of their size, together with the disqualification sanction, will have the effect of "intimidating civil society" and will conflict with "freedom of association and right to respect for private life "(3);

I. whereas the Parliamentary Assembly of the Council of Europe has called on Romania to reject recently submitted draft laws, impose new financial reporting obligations on NGOs, to be amended in accordance with the recommendations of the Venice Commission and the Bureau for Democratic Institutions and Human Rights of the Organization for Security and Cooperation in Europe (OSCE / ODIHR) and submit them to a broad public consultation prior to adoption (4);

J. whereas on 19 July 2018 the Commission informed the Court of Justice of the European Union that Romania had not transposed the fourth anti-money laundering directive, whereas the Romanian Parliament on 24 October 2018 adopted the "Law on the fight against money laundering and the financing of terrorism "has been adopted after a dubious repetition of the vote;

K. whereas there is a continuing debate on the role of the Romanian Intelligence Service (SRI) and its alleged interference in the work of the judiciary in Romania, with discussion of the possible scope and modalities of this interference; whereas, in its opinion of 20 October 2018, the Venice Commission noted that "a thorough review of the legal rules on the control of intelligence services is necessary" (5);

L. whereas a petition was submitted in May 2016 to revise the Constitution of Romania in order to limit the definition of the family of marriage between a man and a woman; whereas many human rights organizations have expressed concerns that this proposal could violate international human rights standards and raise homophobic discrimination in Romania, whereas Parliament has adopted this revision with a two-thirds majority; whereas the referendum on this issue did not set the minimum required threshold of 30% of voters;

M. whereas Romania ranks 25th in the 28 Member States in the areas of legislation, hate speech and discrimination against LGBTI people, according to the 2018 annual report on the human rights situation in LGBTI people in Europe, published by De Europa -region of the International Lesbian and Gay Association (ILGA-Europe);

N. whereas the European Union has committed itself to respecting the freedom and pluralism of the media, as well as the right to information and freedom of expression enshrined in Article 11 of the Charter of Fundamental Rights and Article 10 of the ECHR, that the role of the media for public oversight is essential to ensure these rights and to protect all other fundamental rights;

O. whereas Reporters Without Borders drew attention to attempts to change the Romanian media into political propagandist instruments and expressed its concern about media censorship in the media (6),