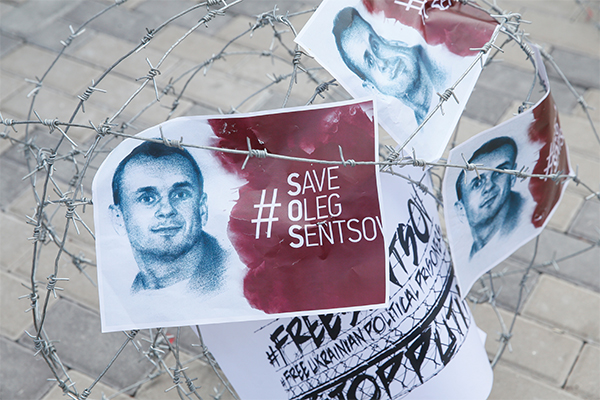 On the Chistoprudny Boulevard in Moscow, 10 demonstrators held support for the Ukrainian director Oleg Sentsov, hungry for the hundredth day in the Yamal colony polar bear. This is reported by "OVD Info".

According to the publication, they were sent to the Directorate of Internal Affairs in the Basmanny District. One of the detainees is journalist Shura Burtin, who was on a hunger strike to support the director.

Earlier, the Human Rights Commissioner in Russia, Tatiana Moskalkova, said that the exchange of Russian prisoners by Sentsov in Ukraine was impossible. According to her, this is due to the fact that Sentsov "actually has two nationalities", and according to the Ukrainian constitution, their citizens are not subject to extradition to the territory of Russia, a similar rule applies to Russian citizens. The Ombudsman suggested seeking a new legal form: for example to conclude a bilateral agreement between Russia and Ukraine on the status of persons with two nationalities.

Oleg Sentsov was sentenced to 20 years in prison on charges of preparing terrorist acts in Crimea in 2015. The prisoner declared an unspecified hunger strike on 14 May, the only condition for the termination of which he called the release of 64 Ukrainian political prisoners in Russia . In July, the mother of Sentsov asked Russian President Vladimir Putin to pardon his son. The Kremlin replied that the petition had to be submitted by the prisoner himself.