A pensioner is assessed for announcing a meeting with reporters & nbsp 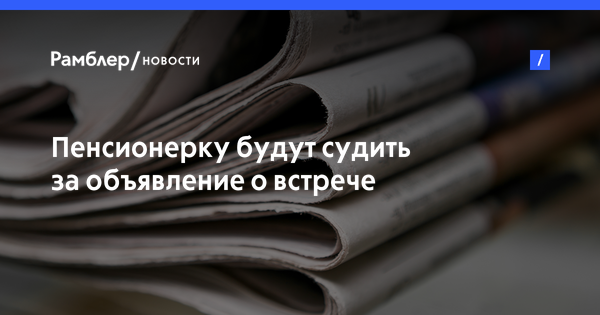 A resident of the Sverdlovsk region will be tried for an uncoordinated rally. The woman placed ads to invite residents to make a story about the lack of hot water in the village.

Hot water in the village of Pokrovskoe Gornouuralsky was eliminated on 1 June. The hot water supply was not resumed until the end of July. The 63-year-old pensioner Irina Kutsenok appealed to the journalists of the TV channel "Vesti-Ural", they agreed to withdraw the story about this. Kutzenok wrote ads for the villagers and hung them in the vicinity of the club.

On 1 August she called the editors again, but the staff of the channel said they had canceled the shootings because the village authorities promised to turn on the water on August 3.

The activist wrote new announcements that the plot will not be removed and that the water will be turned on August 3 and will go to the club. At the building she was met by the head of the territorial administration Marina Selskaya and the deputy of the Gornoura Duma, Alla Semyonova.

They literally screamed me and said I would organize an unauthorized rally, "said Kutsenok.

As a result, the woman went home. On 3 August the village got really hot water. And last week the pensioner discovered that she had been sued and accused of organizing an unauthorized rally, reports Uralinform.

I did not organize any meetings, I just informed the residents, informed them about the course of events, – the activist shared.

The first hearing will take place on 30 August in the district court of Prigorodny in the Sverdlovsk region. Irina Kutsenok is faced with a fine of up to 30 thousand rubles or up to 50 hours of compulsory labor.

The telephones of the city council were not answered on August 22nd.

On the TV channel Vesti-Ural, Ridusu was informed that they would withdraw the story about the pensioner's lawsuit.

"We are going tomorrow to Pokrovskoe, to find out everything, to remove the plot.On 1 August we canceled the shooting, because the government promised to record water on August 3. Water really included", – said the representative of the canal.