Belousov said, "it seems, agreed" for a meeting with business :: Business :: RBC 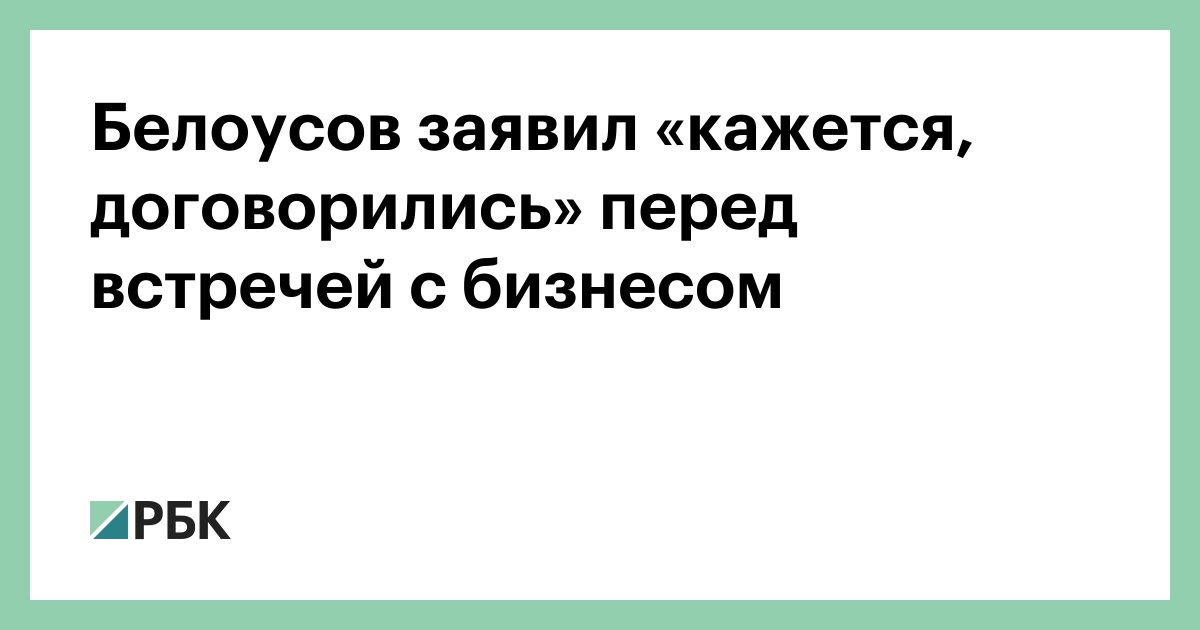 The author of the idea to seize surplus profits from 14 companies said at the entrance of the RUIE building: "We seem to agree". Representatives from 16 companies came to the meeting with Belousov, including those who were not on his list 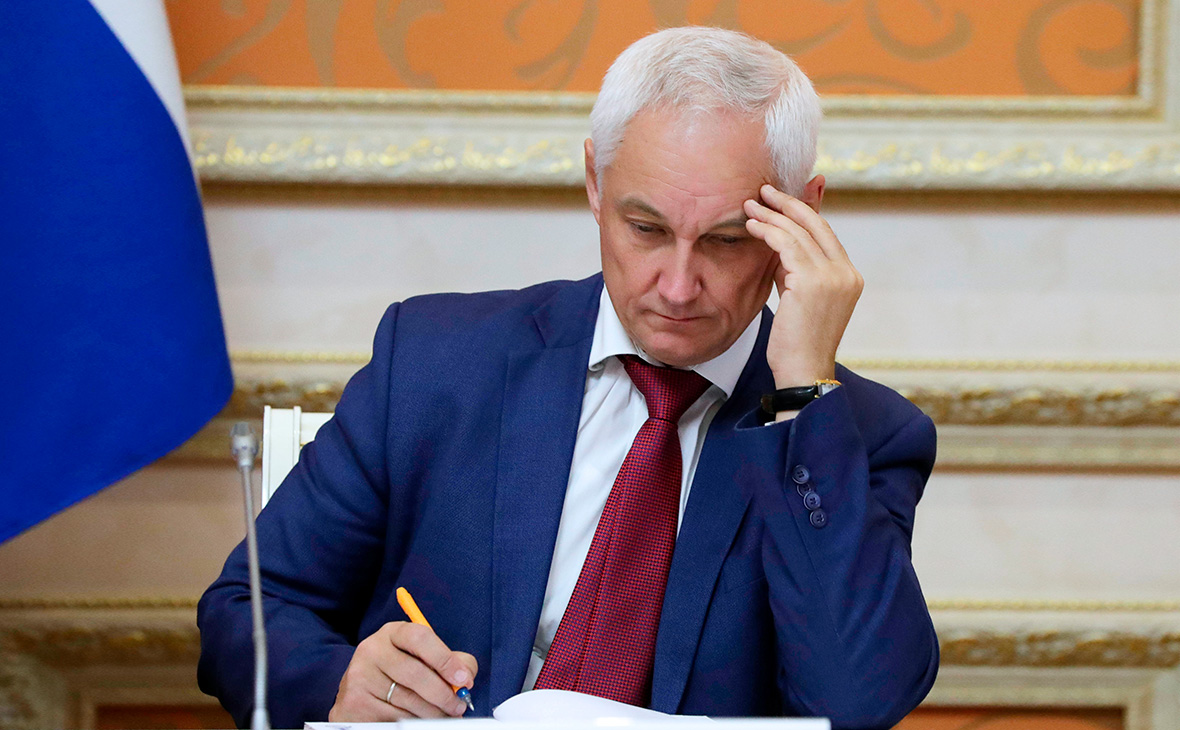 "We seem to agree with this," told the presidential assistant Andrei Belousov to reporters, the author of the idea to withdraw more than 500 billion rubles. super profits from metallurgical companies, fertilizer producers and Sibur, before the meeting with businessmen in the office of the Russian Union of industrialists and entrepreneurs. "With the Russian union of industrialists and entrepreneurs," he said, the correspondent of RBC reports.

The head of the Russian union of industrialists and entrepreneurs, Alexander Shokhin, has not answered the calls from a RBC correspondent.

Catches or investments: what will be discussed during the meeting with Belousov

Chairman of the Board of Directors of Sibur Holding Dmitry Konov said that he evaluates the meeting "as a meeting of pleasant people, to talk about economic issues." "I do not know what is being offered, and documents that are freely accessible state that companies have to share natural rent, and we (Sibur. – RBC) do not extract minerals, we do not pay taxes and duties for mineral extraction. […] When we talk about export duties, one of our products, liquid hydrocarbon gas, is subject to a duty that works like this: the higher the price, the higher the percentage of seizures, "he said.

The meeting was also attended by the first Deputy Prime Minister and Minister of Finance Anton Siluanov, but he did not respond to the questions of the journalists before they began.

On Thursday it was announced that Belousov demanded that at the meeting in the RUIE the companies were represented by the owners, instead of the hired managers. Belousov has listed 14 metallurgical and petrochemical companies, as well as manufacturers of fertilizers. Representatives of 16 companies came to the meeting in the Russian Union of industrialists and entrepreneurs, from the materials of the RUIE. Of the owners of 14 companies mentioned in his letter, only four came to the meeting: Igor Zyuzin (Mechel), Dmitry Mazepin (Uralkaliy), Andrey Guryev (FosAgro) and Alexander Frolov (Evraz), follows from the list of the Russian Union of industrialists and entrepreneurs. They were accompanied by co-owner and chairman of the board of the Ilim Group, Zakhar Smushkin (Ilim Group was not on the Belousov list). Judging from the material of the press service, the representative of only one company from the list of "Belousov", SUEK did not come to the meeting at the RUIE. But instead of him, Dmitry Strashnov, the chief executive director of Eurochem, should be, and EuroChem, like SUEK, is controlled by Andrei Melnichenko.

From Lisin to Timchenko: the loss of businessmen due to the "Belousov-list"

Belousov appealed to President Vladimir Putin with the idea to say goodbye to more than 500 billion rubles. of 14 companies and send them for implementation of the decrees of May. On the letter from the assistant, which was available to RBC, "the resolution of the president" agrees. 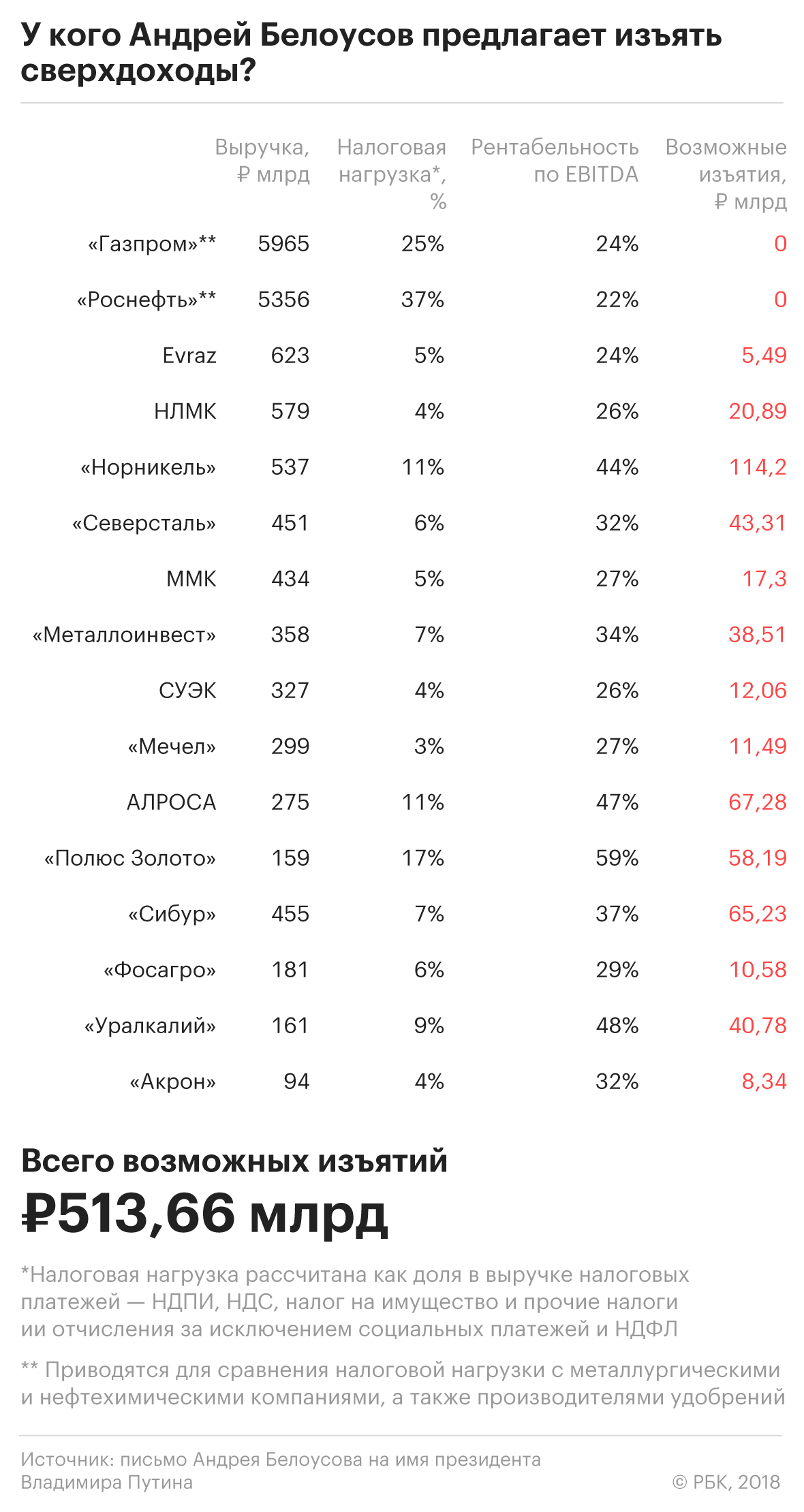 The Minister of Industry and Trade Denis Manturov called the proposal Belousov inconvenient.

Government agencies proposed to encourage companies to reinvest additional profits in the Russian economy instead of an extra tax burden so that owners would not take it offshore. "During the meeting, the issue of developing incentives and creating comfortable conditions will be discussed, so that the additional gains received by a number of companies due to ruble depreciation still in the Russian economy, was focused on investment and development , creating new jobs, "said the press Secretary of Finance Minister Andrei Lavrov.