Hung in a cell omonotzev interested in the UN – Rambler / news 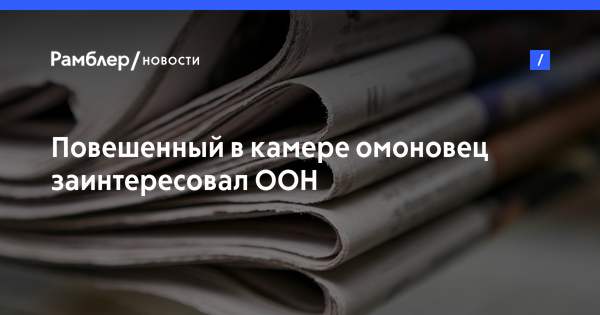 Three UN special rapporteurs were interested in the case of former riot policeman Artem Tronin, who was hanged in the Perm IK-37 on January 1 this year. This is reported by Kommersant.
Special Rapporteur on extrajudicial executions Agnes Callamard, Special Rapporteur on torture and ill-treatment Nils Melzer and Special Rapporteur on the right to physical and mental health Dainius Puras asked in April via the Russian Ministry of Foreign Affairs how the investigation continues.

In the Russian answer it is said that the doctors revealed a tendency to commit suicide in Tronin, his suicidal behavior was "demonized blackmailed". Interviewed colony workers said they treated Tronin politely. The security camera showed that no one came to his cell in the night of January 1st. Only his DNA was found on the sheet and clothing of the deceased. There is no objective evidence that the death of Tronin is caused by torture or ill-treatment, says the UN reaction.

At the same time, the Russian party did not comment on the data on injuries on the body of the deceased. Special UN rapporteurs noted that a trace was found on Tronin's neck, indicating that the deceased had been strangled from behind.

The investigation into the death of Tronin was extended until 1 October.

The former OMON officer, Artem Tronin, was sentenced to 12 years in 2012 for ill-treatment and illegal confinement. He was sent to the Perm IC-22, a year later he converted to Islam. In 2016, Tronin was transferred to IK-37. He wrote a complaint that he and another prisoner had been defeated by the guards after he had commented on the useless soul. Against the second victim, a case was caused about the disorganization of the work of the colony, Tronin was a witness in the courtroom. The former OMON member spent a year in solitary confinement in another colony and at the end of November 2017 he returned to IC-37, where the officer against whom Tronin testified became the head of the operative unit. On January 3, Tronin's mother called the unknown and said that her son had been killed and then hanged on a sheet. In the morgue of the village next to the colony, she found his body.