"I am happy to welcome you": Putin opened Tekhnoprom at the Novosibirsk exhibition center (online report) 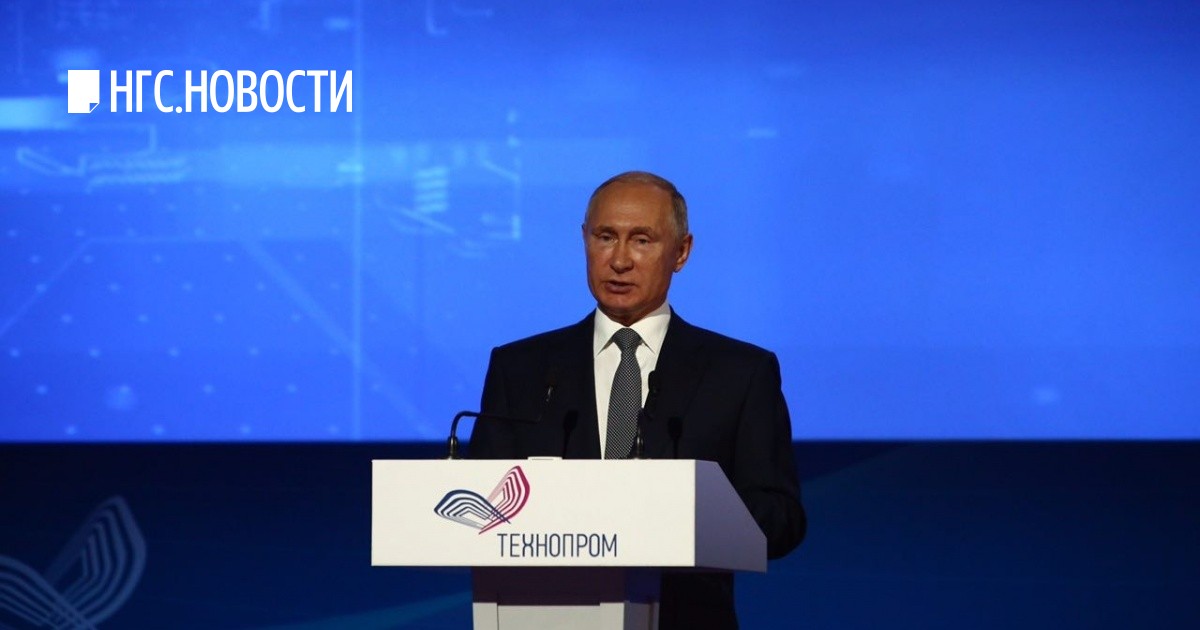 Late in the evening on August 27 in Novosibirsk for the second time in a year the President of Russia Vladimir Putin – НГС arrived. NEWS follows his journey on-line.

In Novosibirsk the head of state visits the Expocenter, where he will be present at the VI International Forum and the Technological Industry Development Exhibition 2018.

Putin was already coming to Novosibirsk this year. In total this is the eighth visit by the President of our city. In February he visited Akademgorodok, where he met Siberian scientists. In general, the conversation about the country was awaiting pioneering developments by scientists, and the interaction between science and industry should become an important prerequisite for development. During the meeting with the president, the president of the Siberian section of the Russian Academy of Sciences, Valentin Parmon, drew attention to the low salaries of Siberian scientists, who surprised Putin.

The building is very quiet. The police are calm. Many people with children, some came with dogs.

The president's column has just arrived in the city of Ob, to a secondary school , our correspondents report the scene.

A helicopter rises in the vicinity of the Expocenter, NGS readers have reported from Technoprom. Putin has been waiting for the Ob.

People who looked at the school were asked to leave. They pushed the waiting tuple behind a plate, our correspondents reported.

The school Significantly more people have become visible in the city of Ob. Everyone is waiting for the arrival of the president, who just spoke during the Technoprom plenary session.

The president gave a signature to the Belarusian sambist, who came to the "Technoprom" with a portrait of Putin.

And so Vladimir Putin watched the podium after his speech. Apparently he likes "Technoprom".

The president left the plenary session because of the stormy applause of listeners.

Putin has announced the first public discussion about Akademgorodok 2.0. The president said that one of the main objectives of the project is "the establishment of new high-tech, competitive manufacturers focused on export."

Novosibirsk Academgorodok should become the flagship of Russian science, the president said. "Actually, he is such a flagship and that's it," said Putin.

Depletion of resources, diseases, ecology – this is a list of problems that, according to Putin, should be tackled by scientists.

"I notice that there are very interesting and promising projects in the exhibition in different areas, I hope that thanks to this forum <...> they will receive the necessary support and further development. In fact, the viability of entire states depends on advanced technologies and their effective development. The positions of the states in the world – especially ours, "Vladimir Putin said during the plenary session.

Our correspondents lead a stream from the Expocenter, where Vladimir Putin is currently speaking.

The telegram channel Pul N3 reports that the president has arrived at Technoprom.

The Novosibirsk-spotter Pavel Osokin saw a presidential helicopter fly over the city from the windows of his apartment.

According to our correspondents, dozens of people gathered in the vicinity of the school building. Everyone is waiting for the arrival of the president, despite the rainy weather.

The locals look at the walls of the president's school. Our correspondent spoke with people wrapped in jackets to find out what they would be talking about with Vladimir Putin.

Parents rehearse the call to the president.

Presidential tuples are tightly tuned cars. And to imagine what it is like inside, you can take photos of the Salon model Senatus, recently published by the company Aurusmotors – the manufacturer of a series of Aurus machines for the president's procession. Admittedly, the president drives an extended version of this car.

Our correspondents reported that all journalists had been removed from the meeting room. Now there are parents, a director and security personnel. It seems that instruction is given.

Vladimir Putin has not yet arrived at the Obskoye school. But employees of the regional government spend time waiting for benefits: they read books that are in store.

In the Expocenter, everyone prepared for the plenary session "Science as an Industry, Agenda 2024." According to the official program, it should start at 10.30 am The first photo 's of our photographer.

Parents came to school for a meeting with Vladimir Putin. On the video, the chairman of the school board Eduard Kurazin communicates with journalists.

But in this office there should be a meeting with Vladimir Putin.

The journalists were given a tour of the school. Our attentive reporters have noted that there are guards on every floor who determine whether someone has been knocked out of the group.

The director of the school, Marina Vashchenko, gave journalists a short interview about the school. He says the president will certainly go to the chemistry room.

The first images of the school building, where Vladimir Putin is about to arrive. Our correspondents say that the school "smells a bit", and the director shows the cabinets to journalists.

From Stantsionnaya everything is ready for the arrival of Putin: along the road we have mowed the grass and cleaned the bushes. Admittedly, road builders say they do this every year. If it was winter, the snow would be removed. Before the last visit of the road in the Soviet area was scraped to asphalt.

In the building of the Expocenter it is still quiet. According to our correspondents, some stands are empty.

Just to the high school building In the town of Ob a registered bus arrived at the government of the Novosibirsk region.

Our correspondents report that the president first goes to high school in the city of Ob. Now the traffic police are employed when building the school.

"The school is completely enclosed, there are several crews on the outskirts, the school is guarded, cars are not allowed, there is no one in the parking lot outside the building Parking in perfect condition, with new asphalt. as if everything is extinct, some people come in camouflage, "our correspondents get off their seats.

The exact route from Putin is traditionally kept secret, but watchful Novosibirskists always notice how the city changes where they "go!". For the last visit by Putin, for example, the spotters did not lose the presidential helicopter from the Yunost youth center. Besides, in the end there were several, and in one of them there was really a president.

All cars have been removed from the car park in front of the Expocentre. Everyone who arrives sends to park the end of the building.

The summer visit of the "high delegation" was the reason for the change in the program of events of the Novosibirsk forum "Technoprom". This time, Putin's arrival is associated with the upcoming elections of the governor and await his statements about pension reform. They are waiting for him in the Expocenter on the Technoprom forum. The participants are already morally ready to show their developments, for example, representatives of the NSTU have made a neutralizing agent for snoring.

The first news from the Expocenter, where the president should arrive at the forum "Technoprom-2018".

There are many, no, sooo many police officers.

Our correspondents say that a blind jam has already been collected at the station. The traffic police officers watched in the most unexpected places.