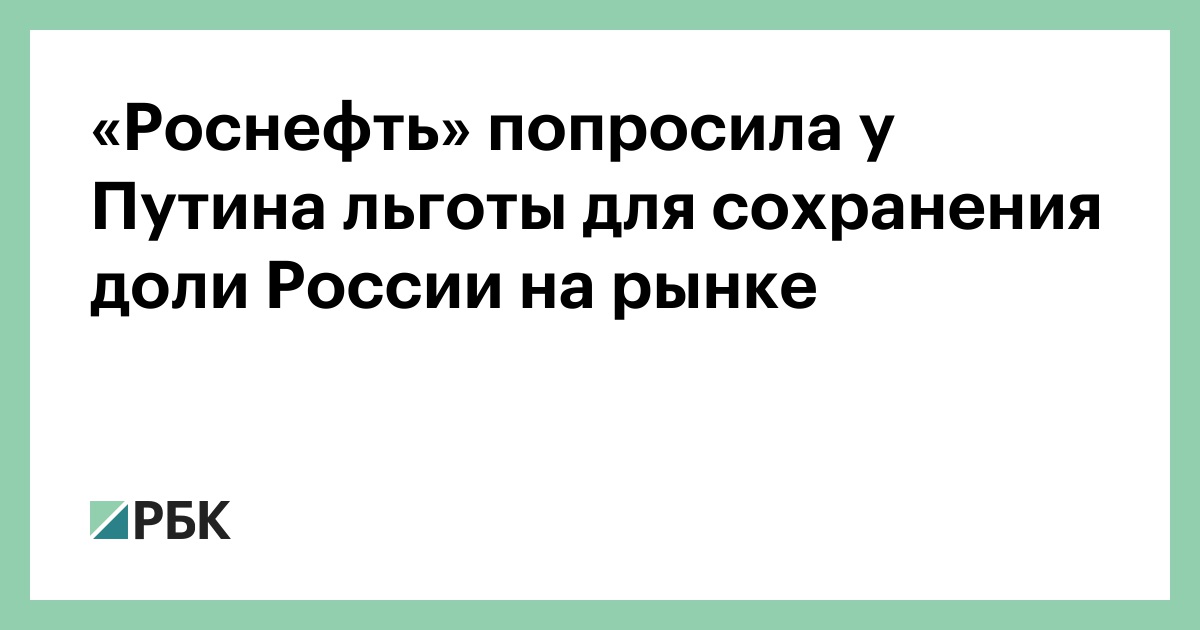 Such incentives are needed when developing deposits in Siberia, says Rosneft. Only in this way is it possible, after tax maneuvers, that 800 billion rubles have been withdrawn from the industry, to keep Russia's share in the international market. 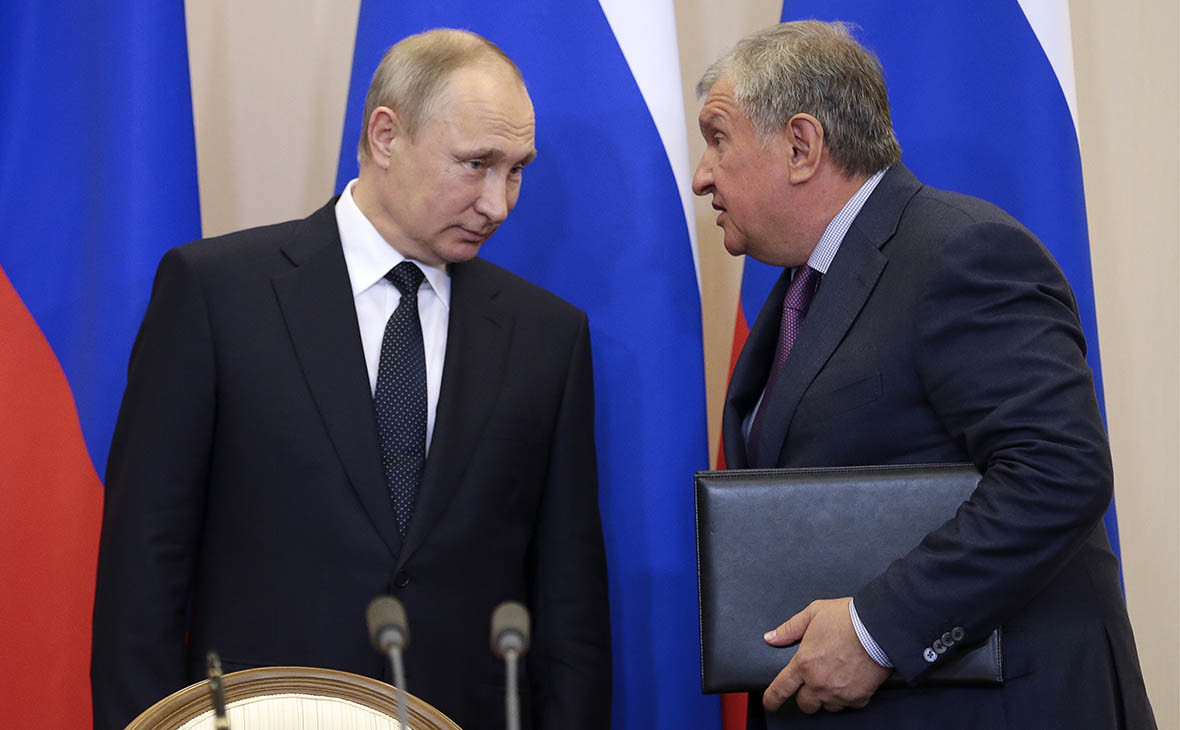 "Rosneft" appealed to Russian President Vladimir Putin with a request to offer tax benefits for the development of deposits in Western and Eastern Siberia. With an appropriate letter from the CEO of the company Igor Sechin, the head of state was introduced at Interfax. The fact that such proposals were sent to Putin also told RBC about a source near Rosneft. Later, these data were confirmed in the press service of the oil company.

In the message to the President, as the agency points out, Sechin drew attention to the fact that "about 800 billion rubles were seized by the tax maneuvers of the industry. In this respect, as the head of Rosneft emphasized, "the retention of Russia's share of the international market can only be ensured by making effective use of the country's resource potential, 59% of which is concentrated in Western and Eastern Siberia. "

To cover the shortage that the world oil market is waiting for, other producing countries are already preparing themselves, Sechin said in the letter, and also stressed that some of them have already taken "unprecedented measures" in this regard.

Russia, as the leader of Rosneft believes, it is necessary to scale up the drilling volumes in Western Siberia. This, noted Sechin, can be achieved by changing the fiscal approaches – for example, by introducing an incremental coefficient for expenses in the form of a depreciation of at least 2.5 in relation to newly introduced funds. The process, as the executive director of the company said, must be carried out by analogy with the current incentive mechanism for research and development (R & D).

The implementation of such a measure in the period from 2019 to 2024, according to Sechin, may allow the drilling of new sources in the region by 5 thousand increases compared to the current plans of Rosneft. This, as emphasized in the message to Putin, the head of the company, will lead to an increase in oil production in Russia by 2-7%.

The letter from Sechin to the head of state, as explained by RBC First Vice President Pavel Fedorov, concerns the root problem of the Russian oil industry: the declining oil production in Western Siberia. "Today, oil production in this region is taxed with the highest percentage of tax exemptions in the country – at 75-85%," he added that providing investment incentives for Western Siberian fields significantly boosts GDP dynamics. can change, increase the total investment in the economy of the country and incomes of the state budget ». According to experts, stimulating investments in production in Western Siberia could yield another trillion rubles. income budget until 2024, "- Fedorov said, explaining that it is the revenue from the growth of production in the region in the sector.

According to RBC, a source close to the Russian Ministry of Energy, the Sechin initiative is already being discussed in the industry. According to his information, the Ministry of Energy has already seen Rosneft's calculations and generally agrees with the conclusions that justify the need to support the extractive industry. In response to measures to boost the state, oil and gas companies will invest more in the development of Western Siberia, which will also increase production, he said.

RBC sent a request to the press service of the Ministry of Economic Development. "We do not comment on official correspondence," said Dmitry Peskov, presidential spokesman, against RBC.

In the last decade, oil production in Western Siberia has declined 1.5% per year with the growth of competitors' production: in the US, Brazil and other countries, RBC said the top manager of a large oil company. "The quality of oil reserves in Western Siberia is better than in America, but fiscal seizures do not allow us to invest in their development to stop not only this fall, but also to ensure production growth. we will give our competitors a share on the global market, and the problem is obvious, "he said.

The head of consulting firm Vygon Consulting, Grigory Vygon, in turn believes that the resources of Western Siberia in the Khanty-Mansiysk Autonomous Okrug (KhMAO) alone exceed more than 12 billion tons of oil. "Of this, about 5 billion tonnes is not involved in development for economic reasons," he emphasizes, while more than 80% of the new large projects in the region are already under development. The launch of new projects, according to RBC's interlocutor, can not hide the fundamental problem of the decline in the production of Western Siberia: in the past decade, as Vygon pointed out, it fell by 41 million tons in KhMAO.

Along with this, the level of privileges for tax on mineral extraction in the Khanty-Mansiysk Autonomous Okrug is the lowest of the producing regions, Vygon explained. "The effective rate is around 92%, the profitability of a significant part of the possible new drilling is below the acceptable level, and the deterioration of stock quality leads to the need to drill horizontal drill holes, each costing more than May amount to 200 million rubles. ", – the expert notes.

To increase the investment potential of drilling, in his opinion, for example, it is possible to increase the payments for depreciations (such as in Norway). This, according to the head of Vygon Consulting, will increase the economic efficiency of the wells and give companies the means for new drilling. The budget, in turn, with the growth of oil production will receive additional income from the tax on the extraction of minerals. "For example, with the introduction of the 2.5 percent apllift coefficient, as early as 2019, in six years, the total revenue from budgets of all levels, according to preliminary estimates, will exceed 800 billion rubles," Vygon specifies.

Experts say it is necessary to stimulate geological exploration for a long time, but no decisions have yet been taken, according to RBC analyst Andrey Raiskeisenbank. According to his estimates, the cost of geological exploration is not too high in the costs of companies – for example, Rosneft has about 1% of the operating costs. According to the Ministry of Natural Resources, Russian oil and gas companies spent 314 billion rubles on geological prospecting in 2017.

"Largely as a result of fiscal stimulus measures in the last decade, Russia has been able to increase oil production in new provinces, for example in eastern Siberia, and in deposits with hard to recover reserves," said Vadim Druzhina, a partner of the international consulting company McKinsey & Company. In Western Siberia, which accounts for about half of the production and almost 60% of the country's proven reserves, production continues to decline, he notes. The main decline in production in this region, according to the expert, falls under traditional deposits, which today bear a full fiscal burden, but at the same time have considerable potential for additional production, taking into account the level of extraction of reserves. .

"It is difficult to accurately calculate the impact of tax maneuvers on the industry, especially because certain parameters can change, so that the state withdraws as much as possible from the sector," said Dmitri Marinchenko, director of Fitch Ratings. As an example he mentioned the ever-changing speed of departure tax for Gazprom. "Under these circumstances, Rosneft is trying to protect itself and achieve the maximum number of possible tax benefits – an absolutely healthy opportunism for the company that considers maximization of capitalization and market share growth to be key priorities," said the source. "Another problem," continues Marinchenko, "is that other Russian companies do not have such a means of lobbing and perhaps remain in a less favorable position." According to the expert, this is "the cost of the structure of the industry in the form in which it exists today".