Vesti.Ru: Kozhemyako, Kokov and Morozov: reallocations in the governor's corps 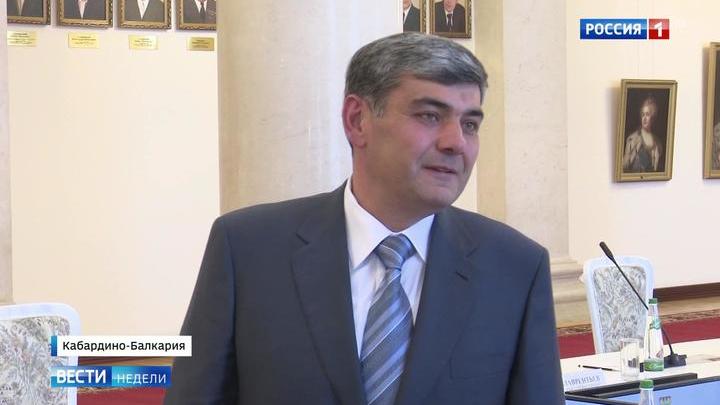 On September 26, President Putin held new reschedulings in the governor's corps. After the invalidation of the results of the second round in the Primorsky area, Putin Oleg Kozhemyako was appointed as acting head of the region as invalid. This is the fourth region of the Far East, which is led by Kozhemyako. And finally, the one where he was born Primorye. Strong leader, able to win the elections and take Primorye off the political turn. According to the law, there must be repeated elections until December 16th.

The head of the Astrakhan region, Alexander Zhilkin, who led the region for 14 years, appealed to the president for a transfer to another job. Putin contented her and the acting governor appointed Sergey Morozov, who left the post of Deputy Head of the Federal Customs Service.

Asked by journalists if they still want to wait for the governor's resignation, Dmitry Peskov, secretary to the president, explained: "The continuation can not be ruled out, because the process of rotating the governor's corps is not a series , but a permanent process that takes place almost constantly. "

The new leaders of the Astrakhan and Kabardino-Balkaria region have almost a year until the next Single Election Day in September 2019. The time is more than enough to prove themselves, and voters – to understand who they are dealing with.

For now it is important for us to summarize the election campaign for the governors and legislators' elections that took place in September. Of the 20 presidents currently elected by direct vote, 16 are members of the United Russia party. Three more from United Russia have been elected in Legislative Assemblies. Total: 19. Of the Liberal Democratic Party this time won two governors. Both – in the second round. In the Communist Party and "Fair Russia" – a winning governor. Each of the parties in the second round, which will be held in Khakassia, can add a new head of the region, because United Russia Zimin withdrew, and now only two candidates continue their struggle – of the Communist Party and " Fair Russia ". As you can see, in the corps of the governor – the expansion of the party palette.

In total there are now 6 regional regions in Russia that have not grown up in the United Russia party. Some of them are Putin themselves and recommended for this function. For example, Andrei Klychkov of the Communist Party of the Russian Federation – elected governor of the Oryol region, Alexander Burkov of "Fair Russia" – elected governor of the Omsk region. Since 2012, the post of governor in the Smolensk region is a member of the Liberal Democratic Party Alexei Ostrovsky.

As can be seen, the president has no fundamental relationship, but business skills, a sense of mission, an awareness of the importance of the tasks ahead and the willingness to work unselfishly.

Among the heads of the region: there are now two more of the LDPR – Sergei Furgal in the Khabarovsk area and Vladimir Sipagin in the Vladimir region. And Sergey Levchenko of the Communist Party of the Russian Federation – the governor of the Irkutsk region.

Most importantly, all new government leaders, regardless of the parties that support them, clearly understand the goals and work for the country. In any case, they had such a possibility. Legislative assemblies were chosen in 16 regions & # 39; s. If we summarize the overall result of voting for party lists and constituencies with one mandate, United Russia has 60% of the mandates. Admittedly, it is, as they say, the average temperature in the hospital. In four regions – Khakassia, Trans-Baikal Territory, as well as in the region of Irkutsk and Ulyanovsk – the United Russia has less than half of its mandates. But even there the members of United Russia were elected speakers. It can thus be argued that United Russia was still in control in the Legislative Assembly of the entire country. And this is a victory.

But the intrigues nonetheless still remain the new Putin appointees for the post of temporary heads of region & # 39; s. So who are they?

The first steps of Sergei Morozov along the corridors of the Astrachan authorities. Without further delays. After arrival – a short chat in the governor's office. I passed the post and accepted the post. In the lapel of the jacket – the icon of the Astrakhan region.

"I did not hesitate for a moment, I felt that I had the opportunity to do something useful and useful for our country, for our Russia, for citizens, for residents, for people from the Astrakhan region," said Sergei Morozov, acting governor of Astrakhan. . area.

The first working day of the acting governor naturally starts with the presentation ceremony that takes place in the administration building. It does not take longer than 15 minutes. Someone has time to introduce themselves to the new leader, but already on the run. The schedule for the first working day is very tight. First – a photo on the documents. Then – orders from staff. Priorities that Sergei Morozov has established for himself.

"I would like to pay attention to water supply, to strengthen the position of the water channel – one can not live on the river and have bad water." It was natural to me that in some places there is a dual water supply, which in the 21st century is a bit wild "- says Morozov.

A lot of work for him in the Astrakhan region. Oil production is growing, mainly on the Caspian plank. Sergei Morozov has already met the head of Gazprom. We discussed plans for gasification in the region for the next five years, mainly in rural areas.

In Astrakhan very powerful shipbuilding and engineering. And the Astrakhan sturgeon is not only known in Russia. However, after the introduction of a moratorium on fisheries, deliveries to the market have been completely reduced. Now – only at the expense of fish farms, which provide a complete cycle of reproduction of beluga, sturgeon, starlet.

In one way or another, the new governor will have to go deeper into this subject. The Astrakhan region for plant production is in third place in Russia. But the regional center has long ceased to resemble agricultural capital.

In recent years, Astrakhan has of course changed a lot. Especially during his birthday, on the 450th anniversary. But a real gift for the city and for the whole region was the construction of a beautiful opera and ballet theater. A real pearl, white marble, Russian style. And now Astrakhan can rightly claim the title of the theater capital of the Volga region, at least from the entire southern Volga region.

Astrakhans fell in love with the theater. Whole tours are organized from the neighboring region & # 39; s – to the premiere. There are more and more invited stars in the group. The new governor is also waiting for a visit – for a performance. To find more in the busy schedule for free 4 hours …

All thoughts on the way and Kazbek Kokov, who also got a new appointment. Admittedly, for him, Kabardino-Balkaria is the birthplace where he was born and raised and who had led his father Valery Kokov earlier. In the most difficult years – from 1992 to 2005.

"I was always at home, I was here with my heart and soul, where native country, indigenous people will help to achieve the goals we define for ourselves in the development of the republic," Kokov certainly knows.

The deputy minister of the republican government, the deputy of the parliament of Kabardino-Balkaria, the office of internal administration of the presidential administration – this experience enables Kazbek Kokov to solve the most serious problems.

The furthest route was from Oleg Kozhemyako. First he flew from Sakhalin to Moscow to give a report to the president and announced his decision to take part in the elections for the head of Primorye. And now Oleg Kozhemyako flies to Vladivostok with a new appointment. Straight from the plane – to a new job. There are urgent matters. We must issue certificates for housing.

A rare possibility is to see how the power change takes place in such an important region. Every minute There is a new sign on the door. Oleg Kozhemyako enters the governor's office just as the old master leaves him.

Immediately – the first meeting. With the cooperation of the mayor of Vladivostok. But the new Vrio inspects again the commercial port of Vladivostok. 2100 employees. Record of Soviet time in freight turnover has been defeated. 10 million tons per year. 1 billion 300 million rubles of taxes were paid. The salary is not bad, but there are many other questions regarding the new governor. Thus, in the first ten minutes, the workers of the Vladivostok port actually formed a work agenda for the coming week.