saudi November 28, 2020 saudi Comments Off on Al-Ahly’s journey in Africa from the early stages to the ninth star 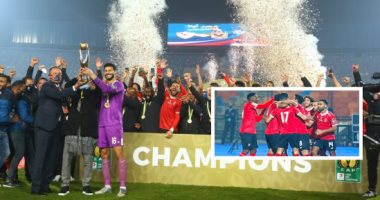 Al-Ahly took the African Champions League title for the ninth time in its history after beating Zamalek in the final match, which brought the two teams together in the final of the tournament tonight with a score of 2-1, and Al-Ahly fought 15 games in his journey to the title, winning 11. He was right in 3 matches and lost one.

Al-Ahly managed to take 3 wins outside the stadium and was able to score with a zero in 8 games, conceding just 7 goals, while his attack streak shook the rivals’ net 36 times.

Hussein Al-Shahat is the team’s highest goalscorer this season after scoring 6 goals, starting in the net of “Arad Bara”, the South Sudanese champion, while Moroccan Wydad witnessed his last goal in the second leg of the semi-finals.

Al-Ahly started his career by overcoming the hurdle of “Going Barra”, the South Sudanese champion, beating him 4-0 in the first leg, then confirming his superiority by winning the second match 9-0 . Al-Ahly met in the 32nd round with the Equatorial Guinea champions Kano Sport team and managed to win the first leg with two goals without reaction, and in the second leg he won four goals without response, for his Reserve a seat in the final prize round, known as the group stage.

Al-Ahly played in the second group competitions alongside the teams “Al-Najm Al-Saheli – Al-Hilal Al-Sudani – Platinum”, and managed to gain 11 points by winning three matches against Al-Hilal, Platinum and Al- Najm, and a draw in two games against Al-Hilal and Platinum, and losing in one game against Al-Najm, to take second place in The group blocked their place in the quarter-finals, to arrange a date with South African champion Sun Downs.

Al-Ahly met Sun Downs in the quarter-finals and was able to take a two-goal victory without a reaction in Cairo, and the same positive draw was imposed on the two teams with a score of 1/1 in the second leg , so Al-Ahly qualified for the tournament’s semi-finals and set a date with the Moroccan Wydad team.

Al-Ahly managed to beat Wydad in the first leg of the semi-final, with a two-goal win with no reaction, and in the second leg they repeated their win 3-1 to score their presence in the final of the tournament against Zamalek.

In the final, Al-Ahly managed to embrace the title by taking a 2-1 victory. Amr Al-Soulia opened the score before Zamalek equalized, allowing Mohamed Magdy Afsha to score the winning goal and crown the ninth title in Red Castle history.