Kouchner: All Arab countries will one day reach peace agreements with Israel, it “makes sense”

saudi November 24, 2020 saudi Comments Off on Kouchner: All Arab countries will one day reach peace agreements with Israel, it “makes sense” 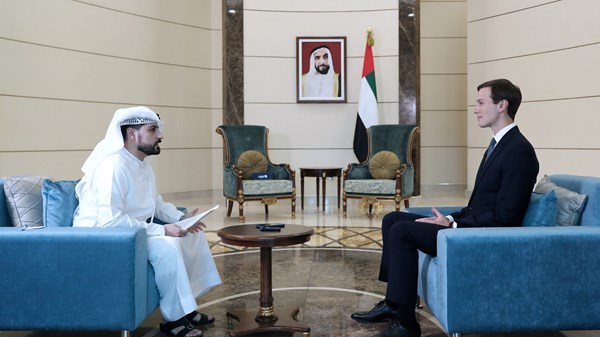 Jared Kouchner, a senior adviser to US President Donald Trump, stressed that it is possible and logical for all 22 Arab countries to one day negotiate peace deals with Israel.
Kouchner revealed in Abu Dhabi that a peace deal between an Arab country – he didn’t mention it – and Israel would soon be signed “within months.”
Egypt is the first Arab country to sign a peace treaty with Israel in 1978, followed by Jordan in 1994 and the UAE in 2020.
In response to a question about the expected timeframe for a fourth Arab country to reach a peace agreement with Israel, he said, “We hope this will be within months.”
Kouchner added that “we cannot solve the problems by boycotting each other. Therefore, peace and the availability of economic and trade exchanges will strengthen the strength and stability of the Middle East.”
Kouchner has led a high-level Israeli delegation on a historic visit to the United Arab Emirates since yesterday, aboard Israel’s first commercial flight to Abu Dhabi.
Kouchner met yesterday, His Highness Sheikh Tahnoun bin Zayed Al Nahyan, National Security Adviser, and His Highness Sheikh Abdullah bin Zayed Al Nahyan, Minister of Foreign Affairs and International Cooperation, in the presence of Meir bin Shabat, adviser and chairman of the Israeli National Security Council , and Robert O’Brien, the US National Security Adviser.
When asked if he believed that all 22 Arab countries could one day make peace deals with Israel, Kouchner said, “This is 100% possible … and I think it makes sense that you do, as it is the best option to do it gradually. “
He added, “I am an optimistic person by nature, and this is a blessing and a curse in my life at the same time. Being an optimistic person is more beautiful than being a pessimistic person. There are a thousand reasons to explain why. this should happen (i.e. reaching a peace deal with Israel) … and the reasons There is little that this should not happen, and I hope the leaders have the strength and courage to make the right decisions, and don’t get frustrated by the minority that opposes this.
Kouchner pointed out that Twitter is not really a place to watch opinions … There are those who are angry on Twitter about the peace deal, and there are also extremists … and those who are against peace are against progress … it’s about giving everyone a chance, and it’s also about respecting religions. Support for stability in the region If you are against that, what do you encourage? .. You encourage extremism, discrimination and hatred.
He added, “Thanks to UAE leadership, there will be a greater alliance … and the minority opposed to the peace deal will become isolated in the region.”
Kouchner made it clear that talks would be held in the future on Israel’s suspension of the annexation of West Bank land, but “not in the foreseeable future.”
He said: “The focus is now on relations between the UAE and Israel and relations between Israel and other countries, and this is of the utmost importance to Israel and the region. Israel has agreed to suspend the annexation of countries and to suspend Israeli laws pertaining to those countries at this time, and I am confident this will be discussed. This issue in the future, but not in the near future ».
Regarding the UAE, Kingdom of Saudi Arabia, Bahrain and Egypt severing their diplomatic relations with Qatar since 2017, and whether there are any developments in this regard, Kouchner replied: “I had the opportunity to discuss the matter during this trip with the UAE leaders, and I will go to Bahrain, Saudi Arabia and Qatar, and it will. I also have conversations with their leaders. US President Donald Trump wants progress on this issue. He added: “We will continue to make efforts in this regard until a just and appropriate solution is found. “