Pirot: The Grand National Assembly as a continuation of the fight against the construction of a mini-hydroelectric power station 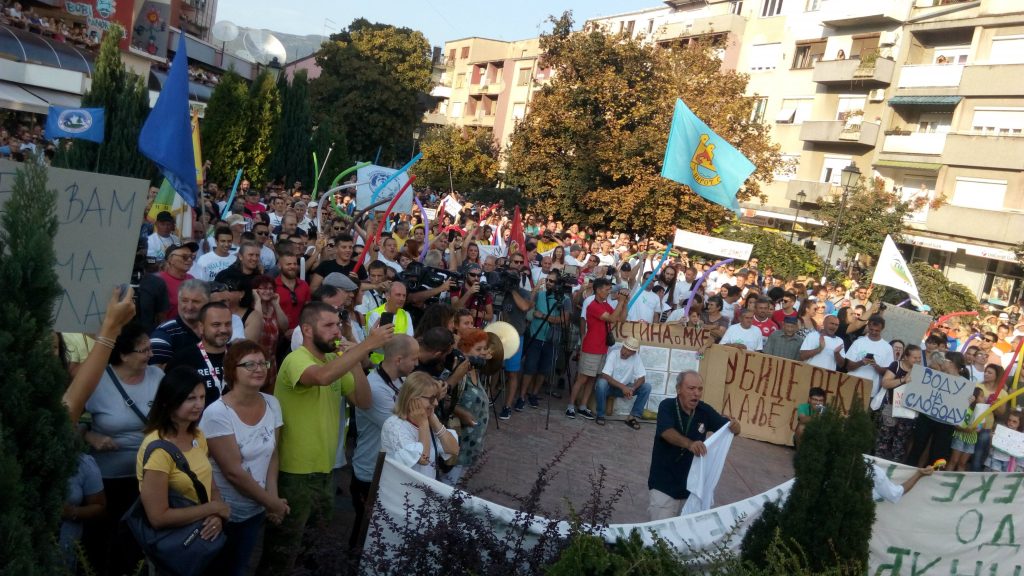 "Kill the river from here", "Beware of the river", "Water to freedom", "To make rivers disappear", "Rivers its life", "Visočica-prekrežena, Nišava-poremećena, Temštica- destroyed. , "We do not give a drop", we do not give the Reka "…

… are just some of the slogans that many citizens today wore at the big national assembly in the square in the center of Pirot called "Tell no MHE".

On the busy city square many speakers exchanged, pointing out the problem of the construction of a mini-hydroelectric power plant, including Snezana Jandrlic of the former group "Suncokret", who sent a short message in addition to singing two songs: "We do not do our river for everyone. "

Association of Local Communities, Old and Bergen and Citizens and the Internet group "Defend the Old Mountains" organized this great National Assembly, attended by a large number of citizens from all over Serbia, gathered around the general idea that, as the organizers say, it points to the disastrous impact that the building has derived SHPP's in protected natural resources for the environment and the quality of citizens' lives. As announced, the next protest will take place in Belgrade and this is the first gesture of a civil uprising against a very bad strategy for the production of energy from renewable sources.

One of the activists of the Association of Local Communities of the Old Mountains, Aleksandar Panic, said that the choir will hear the voice of children, academic profession and environmental organizations.

– This is a manifestation of a real citizens' initiative. There are only guardians of nature here and there will be no political notes.

We will turn to the highest institutions. We will explain to people who have problems building a mini-hydro power plant, what are the problems of nature and what it means destroying the public interest for private interests and how in the legal regulations of the country there is no basis for mini – hydroelectric power plants.

There is little economic and energy benefit and Serbia's ecosystem is being destroyed. We will say again that it is not necessary to build mini-hydroelectric power plants because the energy potentials are so small. Each derived mini billboard that is built with about thirty results in a complete destruction of the environment. I expect that we will massively influence the system's settings and will only start the legal procedure for the elimination of the concept of derived mini-hydropower plants. We want citizens to point out the danger of building a mini-central power station and destroying the environment – says Aleksandar Panic.

Professor Ratko Ristic, a professor at the Belgrade University School of Forestry, says that the arguments are clear and that the production of energy from small hydropower plants can by no means be an important item in the energy balance of the country.

– It is just a mask to enrich individuals. If 58 rivers are reconstructed on Stara Planina, it is a dead mountain, and the people who stayed on Stara Planina have no ground of existence. That is why the fight against MHE on Stara Planina is a national interest and interest of the residents of Stara Planina. This is the whole problem with Serbia. It is planned that 850 small hydropower plants will be built in Serbia and, if realized, we will destroy our most valuable mountain rivers. It must be known that Serbia is the poorest Balkan country in its indigenous surface waters. This meeting in Pirot must be the first gesture of a civic revolt against a very bad strategy for the production of energy from renewable sources – said Professor Ristic.

One of the ativists of the Association of Local Communities of Stara Planina Aleksandar Jovanovic Ćuta said.

– All those who think they will make money and leave us without water know very well that it will not succeed. The next meeting is in Belgrade when after this meeting the moratorium on the construction of all small hydropower plants on Stara Planina has not been announced, says Jovanovic.

Director of the World Organization for Nature Conservation Danny Borey says he came to Pirot to support this citizens' initiative.

This is something that is already happening in some countries of the former Yugoslavia. The message we send today from Pirot is that nature is really interested in us and we point to some decisions about how we use the most valuable thing in Serbia and that is nature. We want a more serious dialogue with policy makers and this is a wonderful message that is sent from here. I think Serbia must have a more serious energy strategy – says Borey.

– As a young man I returned to the old mountain, I live in the village of Stara Kalna. I am a physiotherapist in the profession and in the village I am involved in agriculture. Here I am together to defend the nature of the mountain and to influence young people to return to the village – says Nikola Mišić

Marina Vlasic, professor of biology at Vlasotince, says she would like to see something concrete after this meeting.

"I am here to help this action and start together," she says.

View the facts and rules regarding the construction of SHPPs

"The protection of nature and all its resources is one of our most important priorities: we want to protect our rivers that we regard as an invaluable gift of nature, on the other hand, we only support development if it does not conflict with nature. That is why sustainable development creates the conditions for the long-term preservation of human society and its environment For all this we appeal to the competent institutions and the competent authorities, once again, and with a view to publicly expressed citizens' awareness of the construction of mini-hydropower plants in the protected area of ​​Stara Planina, they will look at the facts and positive regulations in connection therewith and we expect to take a clear and unique position on the construction of mini-hydropower plants in protected areas ", the explanation.

We remind that Minister of Environmental Protection Goran Trivan recently stated in Pirot that he is against the construction of a mini-board in protected goods.

– The part of what started probably could not break, I mean those who started building. The other part where the construction has not started, we will do our best to help them and the state. The mistake was made a long time ago when it was allowed to build mini-hydropower plants in protected areas. There is no mini-hydro power plant that does not disturb the environment. This is the attitude of the ministry and my personal attitude, and that will be the case, Trivan said at that moment.