And the black and white people cheer for Zvezda: Serbia will soon get two places for the Champions League

serbia November 27, 2020 serbia Comments Off on And the black and white people cheer for Zvezda: Serbia will soon get two places for the Champions League 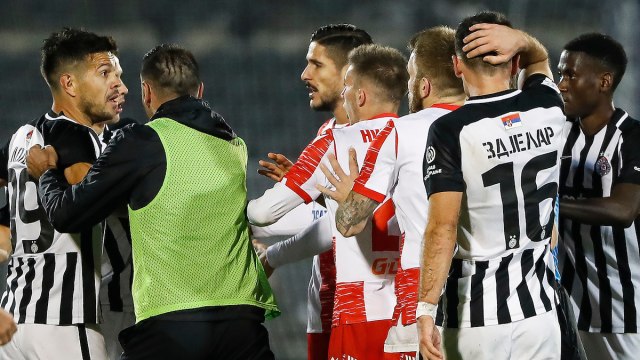 The Red Star’s good results this season, just like the previous one when Partizan took them, contribute a lot to Serbian football.

The Red Star’s good results this season, like the previous ones when Partizan made them, contribute a lot to Serbian football.

With the victory in Ghent (2: 0), the red and white made a record jump on the UEFA list based on the coefficient, but also for the national team.

Serbia is currently fighting for the famous 15th place, which is two places in the qualifiers for the Champions League.

Croatia had it this season, but has already left it to the Czechs for next season.

Looking at the 2022/2023 season (this counts before, more precisely always before two afterwards), Serbia is just below the line, namely Cyprus, with the problem that the Greeks and Czechs are already breathing their necks with three representatives each. greater chances to catch up with us.

This can be seen in the attached table of the specialized site Kassesa.net.

The Czechs and Greeks are threatening, but their assets are slowly running out

It would be good if Crvena zvezda confirmed the transition to the knockout stages of the Europa League with a victory in Liberec against Slovan, a direct clash between Serbia and the Czech Republic, which in the future will have Slavia Prague, while it is realistic that city ​​rival Sparta says goodbye to Milan. .

As for the Greeks, Olympiacos is pushing fine in the Champions League and will most likely continue the European story in the spring, PAOK is fighting PSV for a place in the Europa League, while AEK is slowly but surely saying goodbye to that competition.

It is important that they all win as few points as possible until the end, that is, Serbia rejects the attack.

In 15th place is Cyprus ahead of us with a solid share, but will soon also be without a representative as Omonia is finishing his performance in the Europa League, as well as the Danes who only have a Mittjiland in the Champions League, who are also saying goodbye.

“Forever” together in the Champions League in 2023?

It’s a tough fight for the said season, but what’s important is that Serbia is getting closer to that feat.

Even a solid next season from our clubs, aside from some huge successes from rivals down that path, it looks like Serbia will have two representatives in the Champions League battle for 2023/2024.

One on the champions circuit and the other on the “hell” trail of followers, shortening the way to the Europa League.

And three of them in the qualifiers for the Europa League, one more than now.

We come to the conclusion why 15th place is even more important, not just because of the Champions League.

The famous line separates “wheat from chaff”, ie the better part of Europe from the “worse” because a new league has been announced – the Conference League.

As things stand, it should start next summer if no service is mentioned.

Serbia gets three places in the league, and none in the Europa League, precisely because it is under 15th place.

It will also be possible to collect points for the UEFA list, but it will be much less appreciated, according to the announcements.

Therefore, other teams from Serbia, against weaker rivals, in addition to the “eternal” ones, could score some points.