Bratislava wants to rebuild the Kamennéplein, there is a lawsuit attached to it 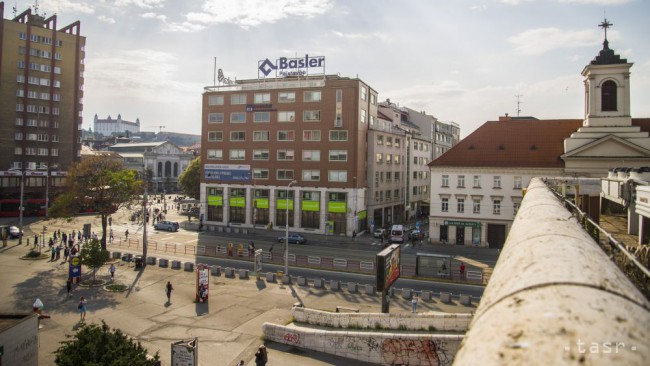 On an archive image a view of Kamenné náměstí in Bratislava from the roof of the MY Tesco building. Photo: TASR Jakub Kotian

Bratislava, August 28 (TASR) – The capital city announced in August the beginning of the gradual reconstruction of the disadvantaged Kamenný Square in the center of Bratislava. However, the square has been linked to a dispute over the rent of the country in question, between Intermont and Intermont. The municipality claims that this dispute has no influence on the reconstruction of the square, but the firm points to the urgent measure by which the city court does not deal with the land covered by the lease contract in any way.

In 2007, Intermont, led by Igor Ballo, signed a capital lease with a ten-year tenancy agreement in Kamenný náměstí. According to the municipality of Bratislava, the company has undertaken to build a complex of underground car parks in connection with the revitalization of the stone square. "Because the tenant was passive, not acting on the land and even stopped paying rent, the previous city management decided to withdraw from the lease after five years." she has approached TASR spokeswoman Zuzana Onufer. However, the company has brought an action for annulment against this decision. In this case, the court ruled that the manner of terminating the lease was not in accordance with the law.

"In addition, the company filed a further claim for compensation for the will to ask the court to extend the lease and at the same time the company has requested the court to order an immediate order. Onufer said. The regional court in Bratislava, by decision of March 2018, only confirmed the decision of the court in Bratislava in the form of an urgent action order, whereby the capital was forbidden to deal with the land in question in any way. He specifically prohibited them from selling, donating, exchanging, setting up, borrowing or adjusting the material.

"It follows from the foregoing that the capital can carry out proper management and use of the country, but can not transfer or otherwise tax the country." Onufer said. In the revitalization, the city declares that it will take urgent action into account and ensure that the nature of the country does not change, so that the square remains a square.

Balo told TASR that Intermont has been in the hands of a regional court since early 2018, which has ruled that the capital has violated the law in connection with the cancellation of a lease. "The court ruled that the withdrawal was invalid and the city was obliged in that respect to pay all costs and expenses." Intermont allowed this decision against the city to claim damages that resulted from the unjustified termination of the contract " he told TASR Ballo. The situation is still being solved by the lawyers of the company.

"Mr. Ballo claims that he suffered damage, but to this day the city did not show the existence and extent of the damage to the relevant documents, and the tribunals themselves have already been paid in the past," Onufer argued.