If the young Annin had not addressed the story, I doubt if there would be a beatification 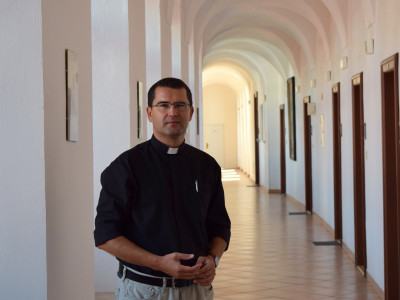 How did people know the story of Anna Kolesar for the first time?

She is best known since the time of her martyrdom, when she was shot by a Soviet soldier in the defense of her purity. A week later, at the burial of the church, the local parish priest Anton Lukáč was entered in the register by the guests of Sanctae Castitatis (sacred sacrifice). The local residents of Vysoké nad Uhom knew about the circumstances of her death, there are still five signatures in the matrix that they really did. For ideological reasons, however, it was not possible to publicly distribute this story in 1989.

Who then introduced it to the public?

When in the mid-1990s the head of the university pastoral center in Kosice, priest Pavol Hudak convinced this story, he said that it is a good example that, especially young people, can motivate the desire for pure relationships. In 1999, the so-called "The joy of the grave of Anna Kolesar in Vysoké nad Uhom, which lasts until today, is a joy.

Was it the question who he invented with the idea of ​​her beatification?

Yes, the testimonies of several young people have been encouraged and he said it would be worthwhile to start the Ankin's beatification process.

What had to be done first?

Pavol Hudak, as the actress of the Beatitudes of misery – the one who officially complains – has requested permission from the diocesan archbishop Alojz Tkáč of Kosice. It was subsequently approved by the Convention of Bishops of Slovakia and Archbishop Tkáč sent a request to the Vatican to begin the process. In July 2004 we received permission from the congregation for sacred matters.

As part of the process the reputation of the Candidate's candidacy for beatitude, whether he lived honestly and exemplarily. Have there been witnesses who knew anything about Ankin's life?

In 1999 Pavol Hudak initially moved to Vysoké nad Uhom and spoke with the fourteen people who knew Ank. He knew that they would not live long and wanted to record their testimony. However, we could not use them in the official process that was going on since 2009. We needed new testimonies that we obtained on the basis of carefully structured questions from the promoter of justice.

What are these questions about?

There were eighty-eight and the replicas on them represented all qualities of the candidate carrier. For example, they asked how Ank regularly went to church, whether she celebrated her behavior with her parents or her general behavior. Pavol Hudak suggested more than thirty names of people who could answer them, including some still living Anchinese contemporaries. This was perhaps the most extensive part of the proof that was needed.

What was the next?

We agreed that it would be good to also include the testimonies of people who have experienced a personal spiritual conversion in Vysoké nad Uhom. It is thanks to them that this place is interesting. We therefore joined the photo 's of Pure Joy and asked seven girls and seven boys to write their own testimony of inner reversal on the one hand. These were things that did not have to be in the proof. But they loved it in the Vatican and they praised us very much.

During the diocesan phase, the committees had to oversee the entire process.

We have added the testimonies of the people who have experienced a personal spiritual conversion in Vysoké nad Uhom. It is thanks to them that this place is interesting. part

Yes, historically and theologically. The first depicted the time in which Anka lived. They described the lives of the inhabitants of that time, or the socio-political circumstances. The role of theologians was to evaluate Ankin's life from a spiritual point of view. It is different and we study the lives of St. Terzie z Avily nebo sv. John Paul II, who left behind many documents and a simple girl who wrote nothing. In her case they had to justify that she had been brought up and led in the Catholic faith. They assumed, for example, that she prayed to the neighbors every Saturday, the week before her death, she went to the confession and went to the reception, or wore a black dress a few days before she died to make her look less attractive. show and protect themselves against possible attacks.

At the end of 2011, all documents were handed over to the Vatican at the end of the diocesan phase. What happened within the Roman?

We gave them a twelve-kilometer document section. They first had to check whether they were legal. A few months ago we were told that it was completely flawless, which made us very satisfied.

Later, the so-called "Positio", the summary of the whole affair of the prosperity process that was investigated by Vatican theologians, historians and experts of the congregation for saints After their approval and the vote of the cardinals, the prefect of the congregation presented a decree about martyrdom to the Pope, who approved him this March.

Did you know this is coming?

We regularly receive information that the process is progressing and there are no obstacles. After having passed the historical and theological committee last summer, we expected this joyful moment.

Is there a picture that we know Anna looks like?

We have about three or four school photos on Ank, but they are of poor quality. We now know from his "unofficial" view, but we will see a new color image in the celebration of the Beatitude.

How did it begin?

We have a tip for her praneter, who lives in the neighboring village and looks very like her. We have made photo's and made this landscape.

Chronology of the Beatitude process

14. 2. 2012 – ending the diocesan phase, delivering the documentation to the Congregation for Causes of Heiligen

3 July 2004 – opening of the diocesan phase of the process, giving the title of God's servant

Persons declared by the Church to become blessed or holy sometimes become patrons. Will this be the case of Anna Kolesar?

We can see it as a pattern of pure hearts, young or looking for pure relationships. But we have not officially spoken about it yet.

Is it possible to say that the activities taking place in the House and at the offices in Vysoké nad Uhom have helped to be beatified?

If young people do not care about this story, they would not have touched them, and they would not have been there for years, I doubt that anyone would ask for the beatification process. If no one notices and spontaneously becomes no inspiration and pattern, we would have no reason to do it.

The activities and testimonies of Vysoké nad Uhom were also raised by the Vatican Commission. When we had to prove Ankina's reputation for holiness, we indicated what all his legacy has done in the lives of many young people. Even if the begging is not successful, it is something that deserves attention.

Some ask questions about the link that is also on her tomb in the formulation "Better death as sin". Is this interpretation correct for Anna Kolesarova? This indicates that rape means committing a sin.

I understand this objection very well and it is really necessary to explain it. Sin is a conscious and voluntary violation of God's law. Logically, Anka would still be a victim and an aggressor-soldier even if he was not shot. On the contrary, rape would certainly not be the fault, because it would have no choice. It is contained in the term rape itself. What is meant by & # 39; Death worth as sin & # 39; is the fact that Anna was always determined to protect her purity, even if she had a choice. She would always have preferred to die by voluntarily using herself to commit sin. It is the expression of her conviction, based on her religious life. She was born on July 14, 1928 in Vysoké nad Uhom, as the daughter of John Kolesar, nicknamed mother Hruska, and Anna, born Kušníř. It was bloody on the second day of July 15.

Ten years later she lost her mother who had died of pneumonia. Anka, as the only housewife, had only an older brother, had to take responsibility for the household and replace her mother. She had many friends, but she could not attend because of their duties. That's why they decided to meet Kolesárovcov. Then they went to the holy mass, the rosary or Litany to a nearby church.

She lived very modestly and simply. She took care of her reputation and purity. She regularly approached the sacrament of reconciliation and the Eucharist. Every Saturday they prayed the rosary for the neighbors of Podhorín.

The Second World War came, however, and at the end of 1944 it passed the Hoge Uhom and the Front. The fighting lasted several weeks and the frightened villagers hid in the cellars. Ján Kolesár-Hruška, Anka and Miško and their neighbors hid in a basement under the kitchen.

Upon seeing the house, a drunken Russian soldier found the cellar and the people who were hidden in it. "Honey, give him something to eat, certainly hungry," said Ján Kolesár of his sixteen-year-old daughter. Anka listened and went to the kitchen to prepare something for the soldier under the tooth. After a while, however, he noticed that a young girl was hiding under the dress of a young woman and urging her to give him up. She also denied the threats of killing her.

She ran and ran to her cellar and brother to the cellar. The angry soldier followed her, pointed at the slot machine and shouted, "Come on with your father!" Exclaimed Anka, "Goodbye, see you, Jesus, Mary, Joseph …" in the middle of the prayer the soldiers fired two wounds, in the chest and face.

The fighting did not disappear, so they spent the night in the basement with her dead body. On the second day, late in the evening, she and her priests buried her without a priest. They had a simple chest from the barn and dug a shallow grave next to her poor mother.

The funeral ceremony was performed by Anton Lukáč, priest on November 29, 1944. Immediately after the funeral Hostia sanctae castitatis, a sacrifice of sacred purity, was written. He also admitted that he had come to the sacrament of reconciliation and holy reception just before his death.

Her grave visits hundreds of young people every year.