What appeared in the archives of Auguste 1968 – Company – Magazine 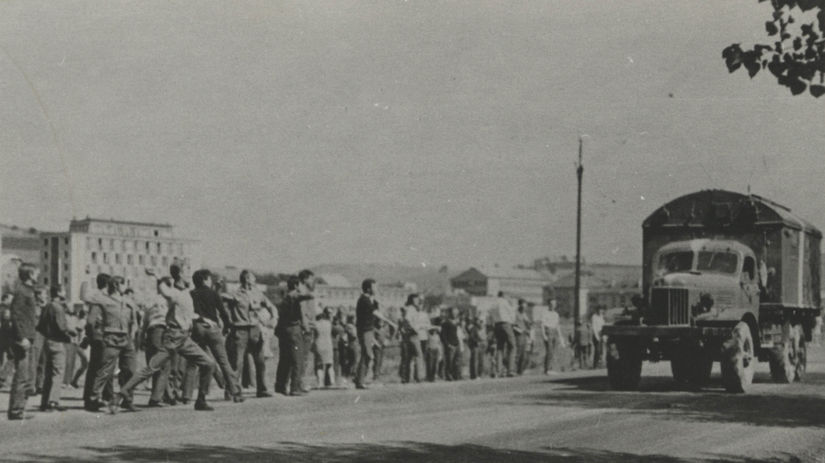 A photo of Detva shows how a man is about to throw a stone on a column. According to the findings of the archivists, the government tried to prevent public security from provoking a pretext for the occupying forces to use the cruel force.

The photo of Detva can see how
man is about to throw a stone on a column. Author: Archive of the Institute
the memory of the nation

"There has been a general ban on drinking, so someone in passion and
drunkenness did not scream, "writes archivist Peter Mikle
Soviet commanders have already complained about throwing stones in the first few days,
Damage to the memorials of the Soviet hero, Soviet flags.
The people on the buildings and the interpretations drew the inscriptions – Mor ho! often
discovered – Father the liberator, the occupying son. And it is even more Soviet
It provoked.

This poster was stolen by the ŠtB in the Lučenec district. People make it by hand
produce and paste in the corridors and hospitals. Portraits of the first
Secretary of the Communist Party of the Czechoslovak Communist Party Alexandre Dubcek deposited newspapers in extraordinary editions.
People are proudly reported to him. "The interest in Dubce's badges was so great
great that one of their companies has been unable to produce, "says Pavol
Bag. The transcript of Dubcek & # 39; s interview has also been preserved in the ÚPN Archive
delivered to the American magazine Look, and broadcast by Radio Slobodná
Europe. "The author asks another question: are you a democrat, Mr. Dubček?
He looks at me, his fantasized smile disappears and he answers: Yes, that is me. But if so
it was necessary to fight against the enemies of socialism, I would fight. "This one
transcripts were copied and distributed by people.

Portraits of the first secretary of the Central Committee of the Communist Party
Alexandra Dubcek placed the newspaper in extraordinary editions.
author:
Archive of the Institute for the Memory of the Nation

This innocent poem of today is on November 18th
In 1968 she asked the secretary of the director of high school in Liptovsky
Mikulas. She multiplied it and when she went to the director to keep the daily mail,
she accidentally left a copy of the poem in it. The director immediately issued an echo to the STB.
She was examined by the secretary, she was suspected of insulting the state
of the socialist world system and its representatives according to the paragraph
104 of the Penal Code. It was also examined for other "fallacies". a
of the miners, in the seventies, openly raised to colleagues after reading
notifications when a doctor is visited. "God in communist, this
they invented it, they had to finish their wind a long time ago. & # 39; They scold him and
prosecuted for insulting defamation of nation, race and persuasion according to
paragraph 198 of the Criminal Code.

Dubček's poem.
author:
Archive of the Institute for the Memory of the Nation

Under this abbreviation was created on April 7, 1968, in the umbrella of shipbuilders in Bratislava
Slovak human rights organization, a sister organization
of the Prague Association K 231 – Association of former political prisoners,
which corresponded to the gradual release of the atmosphere in society.
Co-founder was Emil Vidra. Their basic condition was
respect for the Universal Declaration of Human Rights. Well, in the autumn
In 1968 this organization was banned. Preserved photocopies with statutes
should serve as proof of the criminal activities of its members whose
continued.

Preserved photocopies with statutes
should serve as proof of the criminal activities of its members whose
continued. Author: Archive of the Institute for the Memory of the Nation

In the August days after the occupation, extraordinary publications of newspapers,
people were enthusiastic about information. The truth came out in some days,
three times. The newspapers pushed themselves into spare printers and distributed them
students. These releases at the time of standardization ended in the library
former Institute for Marxism-Leninism (UML) of the Central Committee of the University of Economics in Bratislava
in an inaccessible library "Z". The part was originally
a large collection of newspapers and leaflets – the so-called "K" collection. contained
some rare prints from the newspapers of August 21, 1968 and
from the next period. There have been several extraordinary regional issues, but
and business newspapers that counteracted and reported the occupation
to the first secretary of the Central Committee of the Communist Party, Alexandr Dubček, to the president
From the Czechoslovak Socialist Republic Ludvík Svobod.

In the August days after the occupation
the extraordinary issues of the newspapers, people were eager to
information. Author: Archive of the Institute for the Memory of the Nation

Former editor-in-chief of the then Central Slovak Regional Council
Ján Kučerák, director of the magazine, sent a photo in 2007 to the ÚPN archive
Jozef Levák from Zvolen, who passed the tanks. The photo itself came
"Documented", torn and glued. "When the son of her son Kučerák
showed a young lover in Toronto, Canada, so he broke it, "
explained arc. Pytlík. Kucerak has sent them many photos
occupiers in Banská Bystrica and documents in which he describes, for example, how he is
because of the contents of the newspapers they called every week to the ideological department
KV KSS in Banská Bystrica. In one abrupt session he said that Brezhnev
he did worse than Hitler. "I said that Hitler was at least sanctified
occupation in Munich, but Brezhnev did not do so much. On the contrary, he dictated
other countries to accompany him to the shameful occupation of Czechoslovakia. "
Kucerak and his family emigrated to Canada, but his daughter left him
and to contact the family after more than ten years.

Residents in Banská Bystrica.
author:
Archive of the Institute for the Memory of the Nation

Moreover, humoristic-satirical magazines such as Roháč were extraordinary.
Magazine The Witchworker had a clarification that he was on defense
country. "It is published by Slovaks in Slovak mountains and caves.
Responsible editor of Gen. Unboys. "There were several cartoons,
ads. "By replacing the used tank with a fresh sandwich.
2000 km driven. "And" guaranteed "messages." As we are now
learned, the rural population greets the passersby enthusiastically
Soviet troops sang the glory of Brezhnev and soldiers
obsypalo květinami. For the sake of completeness, it must be added that the message comes from
Soviet countryside. "

They were extraordinary
humorous-satirical magazines such as Roháč. Author: Archive of the Institute
the memory of the nation