Plebiscite Act: “People are convinced that there are no differences between the parties on this point”

slovenia December 6, 2020 slovenia Comments Off on Plebiscite Act: “People are convinced that there are no differences between the parties on this point” 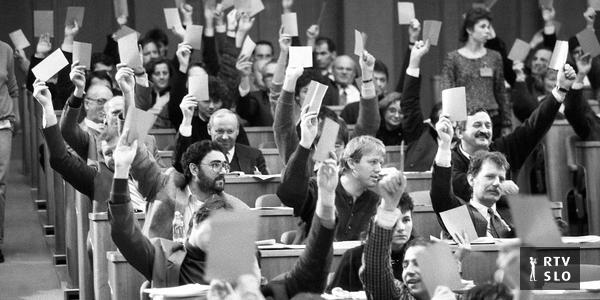 Thirty years ago, accelerated steps were taken towards Slovenia’s independence. Political parties and the leaders agreed to hand over the independence project to the citizens for decision. “Should the Republic of Slovenia become an independent and sovereign state?” wrote on a plebiscite note less than three weeks later.

“The first initiatives for a plebiscite took place in early October 1990, during the first major conflict with the Yugoslav army. During the parliamentary session, the parliamentary group of the Socialist Party of Slovenia proposed a plebiscite in which Slovenian voters could vote for an independent Slovenia before the adoption of the new constitution., ‘the embryos are described by the curator Irena Ribič from the Museum of Recent History of Slovenia, where they have a new exhibition entitled Slovenians voted for an independent state, which, however, will temporarily only be available online due to the epidemiological situation.

But at the time, the ruling Demos coalition felt it was too fast, too risky and that a constitution needed to be passed first, even though the Demos had had a plebiscite on the agenda since the early 1990s. , decided in November in Demos to hold a plebiscite earlier. Constitution makers of the Demos belong to the Constitutional Commission Tine hribar, Peter Jambrek in Show Jerovšek are in Poljče together with the president of Demos Jože Pučnik they convinced the Demos MPs of the idea, including some reluctance.

The proposal also met with mixed reactions from the opposition, who once again claimed to be faced with a fait accompli. “In mid-November, the role of a kind of peace mediator was then taken over by the President of the Presidency of the Republic of Slovenia, Milan Kučan, who calmed the passions between the opposition and the coalition by convening a session attended by the chairpersons of parliamentary parties .Says curator Irena Ribič in the MNZS podcast.

Milan Kučan 25 years later in an interview for the procedure Slovenia and the point! recalled that he was “plebiscite is a very sensitive issue and an extremely important historical project of Slovenes. Any uncoordinated action can endanger it. ”

In the second half of November, on the initiative of Demos president Jože Pučnik, the party chairmen met again and agreed on the main points – the plebiscite and the date of implementation. “On November 20, 1990, the Delo newspaper reported that a majority of party representatives agreed that the plebiscite would take place between December 15 and January 15, that the plebiscite would be passed by a two-thirds majority in parliament, and the exact date of the plebiscite. on the basis of a proposal jointly prepared by the Presidency of the Republic and the government,Curator Ribič says about the plans that voters found out through the media.

How many votes are enough?

“These negotiations really surprised me at the time. The talks lasted well into the night, I remember Spomenka Hribar, with whom we defended the absolute majority, went to individual members of Demos and kept them from trusting people, otherwise I don’t feel like creating an independent state. to have the vast majority disagree‘, the chairman of the Demos coalition party Greens of Slovenia and a member of the Slovenian presidency summed up the atmosphere in an interview with MMC a year ago. Dusan Plut.

There were also differing opinions on when to declare independence after success in a plebiscite. “At the meeting in Poljče, some were in favor of the idea of ​​declaring sovereignty on the day of the announcement of the results of the plebiscite. Fortunately, the government came up with very down-to-earth views, which led to the agreement that we must declare our independence within six months at the latest. At that point, we were not ready for a potentially stronger military conflict‘he revealed to STA a few days ago Lojze Peterle, the then prime minister and president of the SKD party, which was part of the Demos coalition.

The legal and also solid basis for the implementation of the plebiscite was laid exactly 30 years ago -. In December 1990, a vote was taken in parliament on the plebiscite law on the independence and autonomy of the Republic of Slovenia. It was passed by 203 votes in favor. No one was against it, four abstained.

The vote took place in a high-security meeting because those responsible feared unwanted intervention by the federal armed forces during the session. The archives of RTV Slovenia keep TV Dnevnik on this day, which brings us closer to what happened after 30 years:

The plebiscite was: “Should the Republic of Slovenia become an independent and sovereign state?”. The question thus formulated also allowed the possibility of a united union in the Yugoslav state, writes historian Zdenko Čepič in the second part. Slovenian Recent Histories.

Following the adoption of this law, an agreement between the parties on joint participation in the plebiscite was signed, requiring all parties to act together, as they are aware of the historical significance of the decision-making in this plebiscite.

“It was not that difficult for us to agree. After all, we agreed on a plebiscite, which was not easy. Even the unity of that time, so much talked about today, was not achieved in itself just like that. The agreement between the parties is due to Spomenka Hribar. This unity was important so that people could see that there were no differences in political leadership and between the parties on this point. Together we will bear responsibility for the act for which we invited them to the plebiscite. If people felt that this unity does not exist, it could happen that one section of the Slovenes would vote against the other. So the result would be neither convincing nor legitimate, and above all, we would lose a historical opportunity. That is why it was worth so much to deal with the law and the agreement between the parties,“is in the proceedings Slovenia and the point! recalled the then President of the Presidency of the Republic of Slovenia Kučan.

At the same time, public support has increased. Politicians with different orientations moved around Slovenia, declaring December 23 as the day of the decision.