Branislav Fábry: Critics of the year 1968 versus Slovak crimes abroad with their blessings 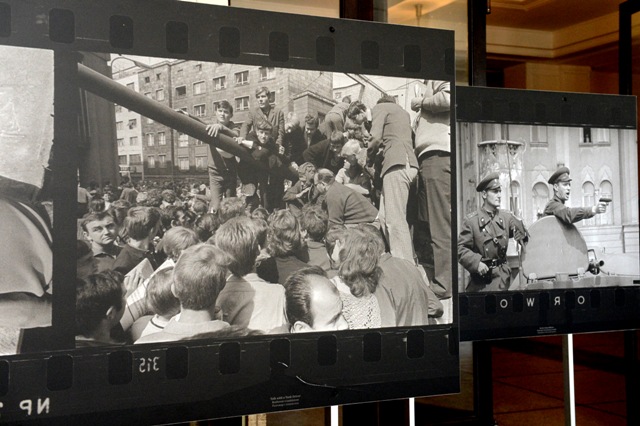 On 21 August we will be reminded of the sad fiftieth anniversary of the occupation of Czechoslovakia by the Warsaw Pact troops. On this occasion, a large number of articles and programs will be published in the media and they will be present on the subject on August 21 and will also participate in the RTVS with the appearance of President A. Kiska. But although the criticism of the occupation of 1968 is justified, much of the criticism is being misused to promote weapons and spread hatred against modern-day Russia.

1968 and his condemnation by the Russians

When assessing the events in 1968, it must be clearly stated that this was a great crime and injustice by the residents and in particular the Soviet Union. There is a broad consensus on this fact, and despite the lies of the regular media, the occupation is strongly condemned by the Russian Federation. Official attitude Moscow said in the Agreement on friendly relations and cooperation between the Slovak Republic and the Russian Federation of 1993 (No 9/1995 Coll.): The preamble states: "…. condemning the anti-human nature of totalitarianism, and desiring to put an end to the totalitarian past, which was also reflected in the observance of the principles of international law in 1968 and the further unjustified perseverance of the Soviet troops on Czechoslovakian territory …" . This attitude towards the events in 1968 was confirmed by President V. Putin during his visit to Prague in 2006.

It is paradoxical that such mainstream official statements from the regular media in Russia have long been ignored. On 26 August 2018, a quarter of a century will go by the signing of a basic treaty between Slovakia and Russia, and it is time for the Slovakian media, under the leadership of RTVS, to begin to recognize Russia's official position on its past. It is true that there are also manipulative views on the events of 1968 in Russia that deny Moscow's guilt, but the official attitude towards 1968 still condemns unambiguously. He is in Russia an open discussion about history, in which different views are given space. Similarly, in the Slovakian media, manipulative information about the crimes of the West, about the war in Iraq in 2003, is fairly common. It is no wonder that even in times of great tension between the West and Russia, many Russians have tried to deal with their crimes against others. In 2010, the Russian Parliament again condemned Soviet crimes in Katyn and even Slovak media that were hated by cyclists from the Night Wolves club attending the memorial meetings for Polish victims in Katyn. even after 2014 …

This attitude of Russia towards the sin of our own past must also be appreciated, because only a few of the great powers can condemn their own crimes. Compare it American attitude towards his own military interventions after the second World War. The US has not yet been able to rewrite their condemnation for the most barbarous interventions, particularly in Vietnam, where they have left around 3.6 million dead and immeasurable damages. In contrast to the agreement between Slovakia and Russia in the US-Vietnam treaty, there is no conviction of American crimes (although they were incomparably more terrible). Similarly, this applies to recent US military interventions: after 2003, the US and its allies have completely disrupted Iraq because of the lies about chemical weapons, but this crime of aggression has not yet been officially condemned.

Slovakia as an aggressor

Unfortunately, in 1968 news reports it is most sad that they are still being abused to support Slovakian participation in military operations abroad. Regular media and politicians warn against Russia and convince people that we must enter into "allied commitments". The smartest thing was during the war in Iraq. It is incredibly shameful, what politicians have cut off when discussing the deployment of Slovak troops for the "coalition of volunteers" in 2003. D. Lipšic tried to convince himself that this is a legal and just war, B. Bugár did appealed to our morals and claimed that we create a better and safer world. Well, M. Dzurinda was proud to report the crime of aggression, even in 2017, when he supported the open letter to D. Trump in which he said: "When America called us in the past, we came, we were with you in Iraq …"

Unfortunately, since February 2003, Slovak soldiers have been involved in the aggression against Iraq, and although they first ensured the succession of American troops in Kuwait, after the conquest of the country, the Americans have also entered there. professional. When R. Fico withdrew Slovak soldiers from Iraq in 2007, it was a good step, but it is unfortunate that the Slovak troops sent again at the end of 2017, allegedly only in the context of military-advisory activities. The fact is, however, that the American coalition to fight ISIL today is more of an obstacle than to solve the problems in Iraq and Syria. Moreover, they do not have to make illusions, the domestic population of Western soldiers hates even more than the citizens of the CSSR in 1968 hated soldiers of the Warsaw Pact.

Something similar also applies to the participation of Slovak soldiers operations in Afghanistan. Despite massive propaganda, it is clear that our soldiers do not strengthen the security of Europe by their presence, and neither the US nor NATO have a future strategy for Afghanistan. The reasons for the next military presence are questionable and, in essence, the US is trying to maintain its base in the strategic region where Russia, China, India, Pakistan and Iran meet. That is why the US has several times proposed the Taliban power sharing agreement. In Afghanistan, Slovakian soldiers have been active for 17 years and perhaps we are even longer than the Soviet occupiers on our territory.

In general, Slovakia has never helped aggression in as many countries as in the 21st century. But NATO seems to be looking for it new opportunities for military engagement in regions & # 39; s where they have not yet acted, for example in South America. This year, NATO, as its global partner & # 39; Colombia, has chosen, and this can be a harbinger of new military commitments, as well as states like Afghanistan and Iraq among the nine & nbsp; global partners & # 39; of NATO. Colombia is an unstable country with the largest number of internally displaced people in the world and recently Syria has also made up for it. Disputes between Colombia and Venezuela are also increasing: Venezuela accuses its neighbor of interference in internal affairs, particularly by sending paramilitary units, and claims that Colombia is also behind the recent assassination of President N. Madura. War between the two states is not excluded at all, and so it would not be good for us to become a member of NATO in South America.

Today, many politicians express the events of August 21, 1968. Although most were not in 1968 or 1968, it is correct to condemn the curse of 1968. The problem, however, is that politicians who are at the same time the greatest supporters of our crimes abroad take this opportunity to criticize Russia. But today we must not settle with Russian, but with our crimes. But they still do not want to condemn them, even today opportunistic politicians of the Slovak government, because this would obviously irritate a number of influential embassies. However, pay close attention to what they will say during the memorial events on 21 August.

However, special attention must be paid to how one can express oneself individually candidates for the President of the Slovak Republic. Many of them will undoubtedly benefit from the enormous criticism of present-day Russia, but the public should also ask them how they judge our own crimes and their participation in the occupation of foreign countries. They have to ask whether they will condemn our participation in the 2003 aggression in Iraq and whether they will support the further broadcasting of Slovak soldiers in foreign interventions. The attitudes of some presidential candidates to these issues are well known (eg E. Chmelar), but some candidates do not present their views too much. Interestingly, the views of R. Mistrík, who wants to go further with A. Kisk's policy, will be heard in his own words.

Our politicians were also able to express themselves more principally on the occasion of the 50th anniversary of the occupation and to accept a declaration condemning our own crimes, especially the share of Iraq's aggression. Last year I proposed the wording of this statement and I will repeat the proposal here:

The Slovak Republic recognizes the principles of international law, in particular the prohibition of the threat of violence, the prohibition on the use of force in international relations, the sovereign equality of states and other principles enshrined in the Charter of the United Nations, the declaration of the UN General Assembly on the Peace of Peace, as well as other documents.

The Slovak Republic rejects the crimes of colonialism and neocolonialism as one of the worst crimes of human history and realizes that the aggressions of the world powers in the Middle East have caused enormous amounts of suffering and are one of the main reasons for instability and migration in the 21st century.