Eric Torell was buried in the Gustaf Vasakerk 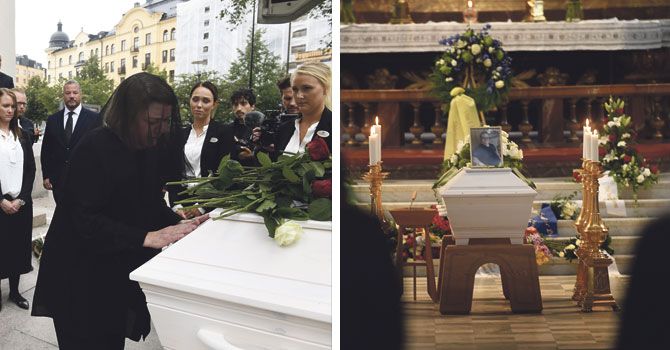 The priest tells it, as a detail, during the beautiful funeral.

But the words became almost unbearable.

The priest Pär Friberg tells us that the twenty-year-old four years ago had to accompany the police during a trip. It was a dream that came true. Afterwards he was so happy that he thanked the female police with a kiss.

The order is like arrows in the church because we know the end.

We know how Eric Torell, who had Down syndrome, ran away from home with a toy weapon early in the morning of August 2nd.

How the three police officers who were looking for a completely different man, according to the witnesses, shouted twice: & # 39; stay, stay, release the weapon & # 39 ;. They screamed as hard as they could without the words being handed out.

The funeral was held on Friday afternoon in the Gustaf Vasa church in Stockholm, not far from the place where Eric Torell died. It was open to everyone because the family wanted it that way. And many came. Family, friends, old classmates and teachers.

They came dressed as they were to honor him. The Eric, who, although he was neat and handsome, had never agreed to wear a black suit.

And they came to remember him. The Eric who loved good food and Elvis and Tintin and went to the disco. As always, it was first to comfort others. Who like to swim and dive, because the restriction was blown away curiously in the water.

The three policemen have been taken out of service, their role is being investigated, a pre-trial abuse of the office has started. The family wants them to be examined for the cause of death.

It may take weeks before we know more.

The only thing that can be said today is: Eric Torell died as a result of an unlikely bad luck, a hellish confusion.

Then the funeral was not a manifestation of the violence of the police. The anger had to be based on something else. A slight complaint about the senseless, unthinkable.

The interpretation of vocalist Moa Lignell from Ted Gärdestad brought the words to pain.

The virtuoso electric guitar by Janne Schaffer vibrated up to the sixty meter high vault, with its floating marble angels and suspended Skultunaljusstakar, against the higher force that, if available, has an explanation.

While the priest who, twenty years ago, called Eric, closed the last chapter in this church. And the white coffin with the boy who loved the police stepped out slowly.

► Down syndrome is a syndrome due to chromosomal aberration – that the person has trees instead of two copies of chromosome 21.

► About 1 in 560 children are born in Sweden with Down's syndrome. The chance of having a child with Down syndrome increases with the age of the mother. It is estimated that between 5,000 and 10,000 people in Sweden have been diagnosed.

► Almost everyone with Down syndrome has an intellectual disability, which can take longer to learn and understand things. There is also an increased risk of other medical problems such as visual disturbance, heart failure or hearing damage. (TT)

Many wanted to follow Eric Torell until the last rest

36 deaths since the 90s – only a convicted police