Ministers on the crisis at Danderyd are urgent: "Unacceptable" 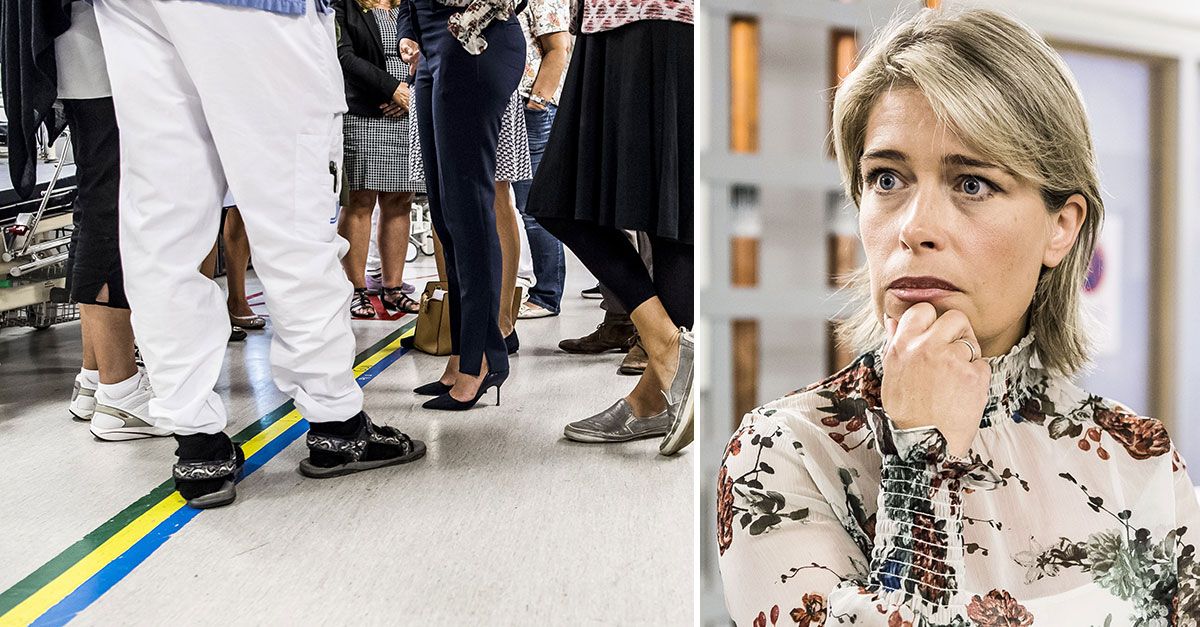 The noise in the emergency room ensured that the staff alerted and reported.

– A completely unacceptable work environment. I expect and demand that the management of Svenonius and M take their responsibility, she says.

This summer, the emergency department in the province of Stockholm fell to its knees.

The worst thing is that it has been in Danderyd Hospital. In Aftonbladet nurses were warned for a 15-hour pass without mattress or toabeksök and patients who had been in the corridors.

Now the trade unions have reported to the work environment authority about serious misconduct.

On Monday, the Minister of Social Affairs, Annika Strandhäll, visited Danderyd's emergency department to form his own opinion.

"It is important for me to listen to those who work on the floor in these activities to get a picture of reality," says Annika Strandhäll.

"It is an unacceptable work environment with a staff that gives everything they can and go to their knees.

There was a report

The work environment authority is now investigating the report with priority.

Annika Strandhäll has worked as a trade union employee herself and says:

– It is alarming that a report has been made. I know it will take a long time for the staff of a first aid department to do it.

Stockholm County Council this year receives 2.2 billion of state investment in care, according to Strandhäll.

"It has never received so much money from the state, so the expectations are high, so I am skeptical about the priorities of the M-leadership, says the Minister of Social Affairs.

The Alliance must act in the district council

There is a shortage of staff and the right skills in Danderyds' emergency department. The provincial council led by the alliance must now take strong action, "said the Minister of Social Affairs.

– It is Svenonius (Council of Finance Council (M) Reds.anm.) Who leads this provincial council, they must ensure that this does not happen.

"There we have a regime in this country that is the policy that is in charge and that is where it is needed," says the Minister of Social Affairs.

Can shoot for more money

The Finance Council Irene Svenonius (M) also visited Danderyd's emergency department. She is of the opinion that the district council Danderyd has given more money and that the politicians of the county council do not have to provide detailed care.

"We have tried to provide hospitals with the best conditions as they are and they have to work to become attractive employers," says Svenonius.

"I think the solutions should come from healthcare, from managers and healthcare staff, but I do not exclude further resources to resolve the situation.

Opposition Council Council Erika Ullberg (S) is of crucial importance to let the hospitals run as a company. A basic problem is the increased capacity utilization of patients, because acute patients with New Karolinska only receive patients with more serious diagnoses.

"It's like giving a stunker a flower girl and saying the problem, it's not serious," says Erika Ullberg.

"She must involve as much as possible in her care"

Iréne Svenonius is of the opinion that Minister of Social Affairs Annika Strandhäll conducts the party policy of the Stockholm County Council.

"I can say that the Minister of Social Affairs, who deals with the Stockholm District Council, does not use the same amount throughout Sweden, often visiting our province than others with longer queues and big problems, Svenonius says.

"I think she needs to do just as much in the whole care and take responsibility as a minister for good medical care throughout Sweden.

"But she goes to your Stockholm metro when.

On Friday, Stockholm County Council, SLL, warned of problems this weekend and referred patients to close-ups.

Nurse Daniela Tapia warns that the staff is still on her knees. It increases the risks – both for employees and for patients.

"It's just a matter of time before someone is bad," Daniela Tapia said.

On Tuesday, the ruling alliance in Stockholm County Council announced the launch of 90 million to improve the situation of the emergency.

Nurses in the control room sound the alarm: "Every day a war zone"

Do not miss the most important debate of the elections 00:30