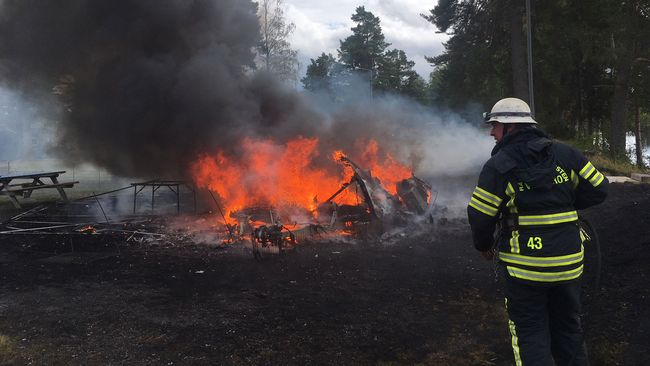 All three fires broke out on small roads bordering the E16. Something that contributes to the suspicion of the rescue service that they can be unloaded.

"It is striking that all fires were started on a small tailgate of the E16", says Jens Hermansson.

He explains that there is no natural explanation as to why the fires would have taken place elsewhere at those locations.

"The caravan is difficult to say anything about, there may be something else, but in the other two places there is no reason to burn," says Hermansson.

Earlier in the summer the municipality had similar problems, such as the neighboring municipalities of Malung-Sälen and Mora. And Jens Hermansson finds it difficult not to draw parallels between the fires and those who flare up on Thursday.

– It was exactly the same syndrome this summer as it is now. Then we had seven similar fires, says Jens Hermansson.

The situation is considered very serious and now you hope that the public will give tips and information.

"We are serious about this, it is very worrying and filthy and feels a bit uncomfortable, and now we want to invite the audience to listen when something is seen," says Jens Hermansson.

"Will look for a relationship"

Police officers investigate fireplaces to try to determine the cause of the fires and to check whether there is evidence that they can be landed.

"It is clear that we will look at a possible relationship, we will work together with the rescue service," said Mats Öhman, head of the police.

According to him, however, some testimonials are not in one of the cases.

Three fires in just over an hour

The first alarm arrived on Thursday afternoon at 2.22 pm on a fire in a caravan at Camping Nås. The next alarm came at 2.33 p.m. at a small forest fire in Lappheden and then there came an alarm at 15.27 with respect to a fire in a shadow in Skamhed.