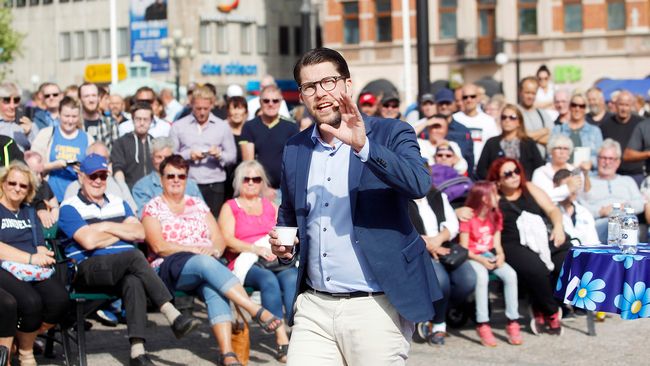 In the middle of the rolling sport and with only two and a half weeks to the election day, it is clear that the Swedish Democrats lose their support in their opinion. According to the SVT / Novus selector barometer, the party lost 2.4 percentage points of support in just one week.

19.2 percent of voters would vote for SD if it was the election today according to the survey. This means that fate with a very small margin is again the fourth largest party, or in practice equals the moderators who get 19.3 percent in the measurement and thus again the second largest.

"The decline of the Swedish Democrats is likely due to the success of the moderators, that the moderates are again seen as a credible alternative for disappointed voters who want a change of government," said Torbjörn Sjöström, CEO of Novus.

Otherwise there are small differences compared to last week's measurement. No statistically safe changes were found except SD & # 39; s tape. Confusing for the Christian Democrats who are still under the parliamentary barracks and receive 3.5% support in their research.

The left party is in a downward trend and supports the second measurement in a row, the party gets 8.7 percent and compared with Julia's voter barometer the decline is considerable.

The center party, on the other hand, continues to rise and gets 10.0 percent.

Small changes for other parties

As far as the other party is concerned, there are small changes. Liberals are clearly above the parliamentary barrier of 5.3 percent, including the Environmental Party, which would receive 6.2 percent if it were elections today. Social Democrats remain at a historically low level for the party and receive support of 25.1 percent.

However, the decrease of SD does not change the position between the blocks. In total, the red-green parties are still larger, 40.0 percent, compared with the alliance parties receiving 38.1.