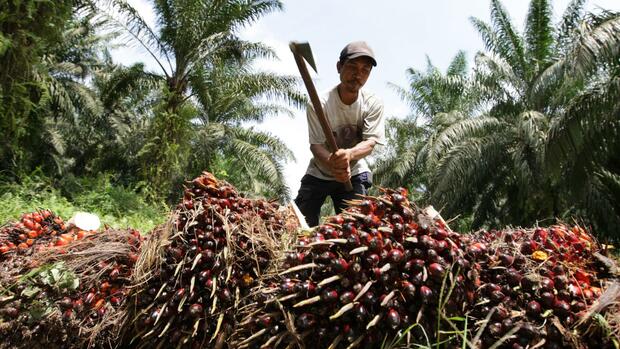 The palm oil industry has a significant impact on the destruction of the global rainforest.

BangkokIf deep rainforest areas are destroyed deep in the Indonesian jungle, this is usually hidden from outsiders. The manufacturer of consumables Nestlé now wants to gain insight into the machinations from space: with the satellite system Starling, developed by Airbus and the organization The Forest Trust. The technology promises high resolution images and radar images that are supposed to make illegal deforestation visible in near real time.

By the end of the year Nestlé wants to monitor the entire palm oil supply chain with the technology to remove polluters, the group announced last week.

But environmentalists criticize the efforts of the Swiss food company. Manufacturers of consumer products such as Nestlé have promised to stop deforestation for almost a decade, Greenpeace activists said. It is embarrassing that Nestlé is only beginning to supervise suppliers.

The company already knows that palm oil is involved in controversial suppliers – including Wilmar, the largest palm oil store chain in the world. "If Nestlé wants to solve its palm oil problem seriously, it should drop Wilmar," Greenpeace activist Richard George said.

This Wednesday, the environmental organization wants to substantiate its allegations with a new report. Many large producers of consumer goods such as Nestlé, Unilever and Pepsico have won palm oil from groups of companies involved in the destruction of rainforests.

Since 2015 they have cleared a rainforest area of ​​130,000 hectares, which is almost double that of New York City. Almost half of the deforestation concerns the Indonesian province of Papua, where the palm oil industry has only recently spread. According to Greenpeace, the new report is the most comprehensive analysis of the destruction of rainforests in Papua to date.

Environmentalists are particularly critical of Wilmar – a Singapore-based company that, like no other company, controls global palm oil trade. The research shows that Wilmars fully succeeds in resolving its ties with the destruction of the rainforest, the activists complain.

The Group had purchased palm oil from 18 of the 25 disputed producer groups. And that while Wilmar adopted a directive in 2013 that bans deforestation – as the first large palm oil company.

After five years Greenpeace takes a devastating conclusion: "Brand manufacturers and suppliers have passed such guidelines, but have not effectively implemented them."

The biggest problem is the confusion of the palm oil industry. Plantation operators often work with company networks, in which some of the companies work supposedly clean, while another part continues to destroy rainforest. Greenpeace therefore requires that customers check the entire supply chain. Otherwise satellite monitoring would have little use.

This is Nestlé's brand empire

Nestlé informs on request that they are worried about the allegations against Wilmar. Maintain the relationship if the sustainability requirements are not met. The Forest Trust also said that it threatened Wilmar with an end to the partnership. However, the company has now agreed to submit a new action plan at the end of September. This is to solve the sustainability problems, according to Wilmar.

With the first details of the plan, Greenpeace was not satisfied: violations of the prohibition on deforestation in Wilmar's supply chain would therefore not be adequately addressed.