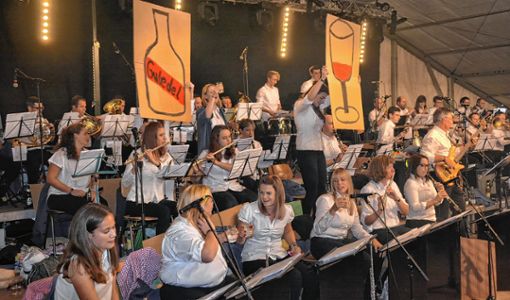 A mighty party mood was announced on the weekend at the 69th Winzerfest in Efringen-Kirchen. On Friday, the "Rock Evening" warmed the visitors, and on Saturday evening, the Musikverein Efringen-Kirchen brought the big tent to the boil.

Efringen-Kirchen. Already at the beginning of the program on Saturday night, the tent was full and the first clock started with a gigantic party in the Oktoberfest, which is unmatched in the region. Many visitors came in costume: Lederhosen and Dirndl were trumps. The Musikverein Efringen-Kirchen really entertained the crowd. Moreover, the mood was tempered by Joachim Wechlin.

For most titles the audience immediately agreed, it was sung enthusiastically. From heavy songs, groovy rock to the typical sing-along sounds and hits from Ballermann: there was nothing that the Musikverein could not implement musically.

For more than four hours the orchestra, led by Udo Schmitz, has heated the audience so much on the big show evening that it hardly kept anyone in the squares and almost everyone danced on the couches and even tables.

Various actors created the vocals, either as a soloist, in a duet, or as a group, mood music was offered at its best. At "We will rock you" (Queen) at the end, there was hardly a stopping. The party continued dancing and then dancing with DJ BaCo. "What a party!", Mayor Philipp Schmid was enthusiastic.

Hilarious celebration was already on Friday. The "Rock Evening" started with "Sausage O & # 39; Fire", which rocked the audience with a rocking sound. The highlight of the evening was the appearance of the AC / DC tribute band "live / wire". The five men from Switzerland swayed the wine festival in Efringen-Kirchen until after midnight. Däny (vocals) surprised the audience with the voice of Brian Johnson. And Cello (lead guitar) had set himself the task of playing his riffs on the sound, just like Angus Young. In his wine-red velvet school uniform he swept across the stage and mistreated his Gibson to the lying position on the stage. "Live / wire" provided professional, genuine original sound and a streamlined stage presentation that simply captivated the audience.

A short blackout prevented the band and the audience from Hell & # 39; s Bells & # 39; entered, for which a large bell was lowered from the tent roof. After a short break, the hard rock show continued. And up to 1,000 fans of AC / DC music, including mayor Schmid in the Iron Maiden T-shirt, celebrated every title.