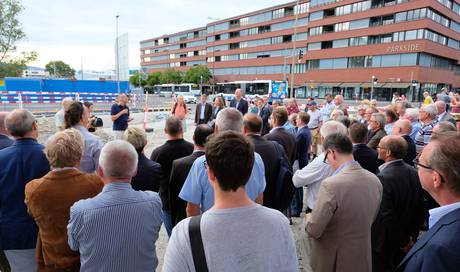 One signature after the other came together last night in the manifesto against the stop initiative Limmattalbahn, on which the people of the canton of Zurich vote on September 23 and want to avoid the Limmattalbahn-stage from Schlieren to Killwangen-Spreitenbach. About a hundred people had come to the wing of Schlierer. Above all, politicians were the ones who signed – from the Aescher National Council and Limmattalbahn Chairman Hans Egloff (SVP) about Dietiker Kantonsrätin Rosmarie Joss (SP) to numerous local administrations of all concerned, but also from many other communities of the left and right Limmattals,

The economy was also there, such as the Association Center Dietikon with President Elio Frapolli and Managing Director Sabine Billeter, the Dietikon Industry and Commerce Association with chairman and cantonal council Josef Wiederkehr (CVP) and secretary Edi Cincera and the Chamber of Commerce of Schlierem with their co-chairmen and district councilor Andreas Geistlich (FDP). But enough of the name.

The opponents of the Limmat Valley Railway, who wanted to avoid the route from Schlieren to Killwangen-Spreitenbach, became public yesterday. Bernhard Schmidt (non-party), chairman of the Committee "Stop the Limmat Valley Railway from Schlieren" sent yesterday a press release in which he refers to the report of the Limmattaler newspaper on the general meeting of the Limmattal site promotion (SFL) , which took place on 13 March. At that time it became known that the location promotion, which is sometimes also financed with taxpayers' money, supports the campaign for the Limmat Valley Railway and the Stop Initiative. It should be assumed, Schmidt said, that tax money would flow indirectly in the election campaign. From the perspective of the stop insiders, that was morally reprehensible.

In practice, 20,000 francs were spent. "This amount is specifically stated in the budget and was specifically mentioned at the General Assembly.The post is not hidden under another item", says Brühlmann.In general, he sees no problem at all. "There is no better location promotion than solving traffic problems. That is pure location promotion, "says Brühlmann. In addition, location promotion is always a mixture of politics and business. "The Limmattal location has long been supported by public funds. Because a functioning economy is necessary for the good development of a region. »

Schmidt also criticizes that Brühlmann and Dietiker's old city president – and also co-chairman of the committee – Otto Müller (FDP) had already joined the committee during their term in the city council. Again, Brühlmann sees no problem. "It is my right as a voting member of this company to perform such a function," he says. And he adds: "During my 16 years in the city council and the Zurich Planning Group Limmattal, I worked for the Limmat Valley Railway, which also coordinates the regional plan, when I had the opportunity to serve the railways in the decisive vote, I was happy to do so. "

SVP Dietikon is new to the boat

For the members of the Dietikon SVP section – such as Canton Councilor Rochus Burtscher and Mayor Roger Bachmann – yesterday, after the manifest signing, it went on to the next Limmattalbahn meeting. The Dietiker SVP had to take their slogan after the cantonal party last week decided to support the Limmat Valley Railway and reject the stop initiative. Shortly before the editorial deadline, the decision was taken: the Dietiker SVP decided the no-slogan to end the initiative with 19 to 8 votes with one abstention.